The Diary of Anne Frank Changed The World

Many people think that Anne Frank was a normal teenager who died in the Holocaust; however, she was an amazing writer that survived in harsh conditions. Anne struggled a lot with living in cramped conditions with multiple people. Her life would get more difficult with everyday that went by. Anne wrote all the time about the cramped conditions she lived in. Writing was her getting away or escaping from reality. Because Anne’s family was Jewish, they could not get caught by the Nazi’s or else they would be sent to concentration camps or worse, be killed.

Don't use plagiarized sources. Get your custom essay on
“ The Diary of Anne Frank Changed The World ”
Get custom paper
NEW! smart matching with writer

Because of this, she constantly lived in fear, but always had big dreams of becoming a writer. Anne Frank changed the world by being one of many Jewish people who survived World War II and the Holocaust, all while documenting her life. Unfortunately she did not get to see the impact her biography made on the world, because she died before it was published.

First, Annelies Marie Frank was Anne Frank’s real name (Mackenzie). Anne was the second child of her family, after her sister named Margot, she was three years older than Anne. The rest of Anne’s family consist of her mother Edith Frank and her father Otto Frank. Anne was born on the 12th of June in 1929. The Jewish family moved to Holland, Germany where Otto had ran an outstanding business. The same year they moved was the same year that the Nazis had a huge uprise in power.

When Anne’s sister Margot received a letter and had to go to a forced- labor camp on the 6th of July in 1942, all of the Franks went into hiding.

They went to a warehouse where Otto Frank was running a food-product business establishment. Throughout the two years that the Franks were there, they were also conjoined into a room with not only their family but the Van Pels who were also jewish, and a jewish dentist named Fritz Pfeffer. Although they are all Jewish, Otto Frank had some help from people he had worked with like Miep Gies to bring all of them food and other supplies (Berenbaum). During this time, since Anne didn’t have any friends to confide in she would write in her diary faithfully and tell us about her day to day life with her being in hiding (Waxman).

In particular, Anne wrote about her struggling for food, and the terror of being found. She also expressed her boredom, and the struggles of growing up in her diary (Migaki). That was her type of entertainment. Anne not only wrote about horrors and tragedies of the war, but also about her everyday problems of being a teenager with life changing events going on. Although Anne was not the only one with a diary in her family, her sister Margot also had one. Unfortunately, no one has been able to find her diary (Waxman).

Writing was one of Anne’s primary pastimes. Anne would also like to write about how she missed nature, Jewish Ethics and her views on humanity. One of Anne’s most famous quotes is “I still believe, in spite of everything, that people are truly good at heart” (Szalay). She expressed how she felt everyday; Even though people weren’t the nicest to Anne she still chose to believe differently. Many people in the world today still believe what Anne Frank had said. Meanwhile as Anne wrote in her diary on the 4th of August in 1944, everyone in the Secret Annex was found. Still no one has been able to find out who told the Gestapo about the incident. The family got arrested after being found and betrayed by an anonymous source that told on them (Waxman).

Throughout the tragedy, Miep Gies as mentioned in the previous paragraph would go and visit the Franks. Miep was a very good and faithful partner and friend to this family. So, when Miep found out about what happened he went to the Secret Annex and retrieved Anne’s diary. He had hoped that one day he would be able to personally hand the diary back to her. Sadly, Anne Frank’s last known diary entry was on August 1st, 1944. Three days before this dreadful tragedy had happened (Waxman).

As a result of the Gestapo finding the Franks and everyone that lived with them, they sent them all to Westerbork. This was a holding camp in the Northern Netherlands. The group had been transferred in September of 1944 to an extermination and concentration camp by a freight train. The new camp’s name was Auschwitz-Birkenau. Edith Frank, Anne’s mother, had died from starvation in Auschwitz in the year of 1945 in January. Anne and her sister Margot were spared from their immediate deaths from the gas chambers and after several months of hard labor in Auschwitz they were instead sent to a Northern Germany concentration camp called Bergen-Belsen. They had arrived at the camp in the winter. At this concentration camp the food was scarce, diseases were uncontrolled, and sanitation was horrible (History.com Editors).

Suddenly in february of 1945, the Frank sisters both Anne and Margot had died from a disease called typhus at the Bergen-Belsen concentration camp. When they passed their bodies were thrown into a mass grave, which is a big hole in the ground filled with deceased people from the Holocaust and World War II. Several weeks later, British forces had liberated the concentration camps (History.com Editors). Out of all the people that lived in the Secret Annex, Otto Frank was the only person who survived. He was liberated by Soviet troops on the 27th of January in 1945 (Conradt).

When Otto had returned to Amsterdam after his release from the concentration camp, Miep Gies gave Otto all of his daughters work. Anne’s work was contained in 5 notebooks and around 300 loose papers. After getting Annes materials and her diary that Miep hid in Anne’s desk. When Otto had discovered the writings of Anne’s he couldn’t read them all. He would read some of her work and for him it would bring back very vivid memories. He also knew that Anne wanted to become an author or journalist and that Anne would hope that her wartime writings would one day be published (History.com Editors). When summer had come, Otto found out that his daughters and his wife were all gone for good. It was Otto Frank who published “The Diary of Anne Frank” after giving it a long train of thought. Otto had lived a very long life and unfortunately he also passed away in Basel, Switzerland at the age of 91 (Conradt).

Lastly, Anne Frank changed the world by being one of the first people involved in the Holocaust that documented it. Anne Frank’s diary endures, not because of the remarkable events and how she described them but, due to her being extraordinary as a storyteller and her unwearied spirit throughout the most the most horrific and devastating circumstances (Biography.com Editors). Anne Frank changed the world by becoming what she was meant to be an author who had a profound effect on the world. Even though; her life was cut short and she passed way too soon, the dedication that she put forth and into her diary was realization of what the world was turning into in her lifetime (Stepp).

The Diary of Anne Frank Changed The World. (2021, Dec 04). Retrieved from https://studymoose.com/the-diary-of-anne-frank-changed-the-world-essay 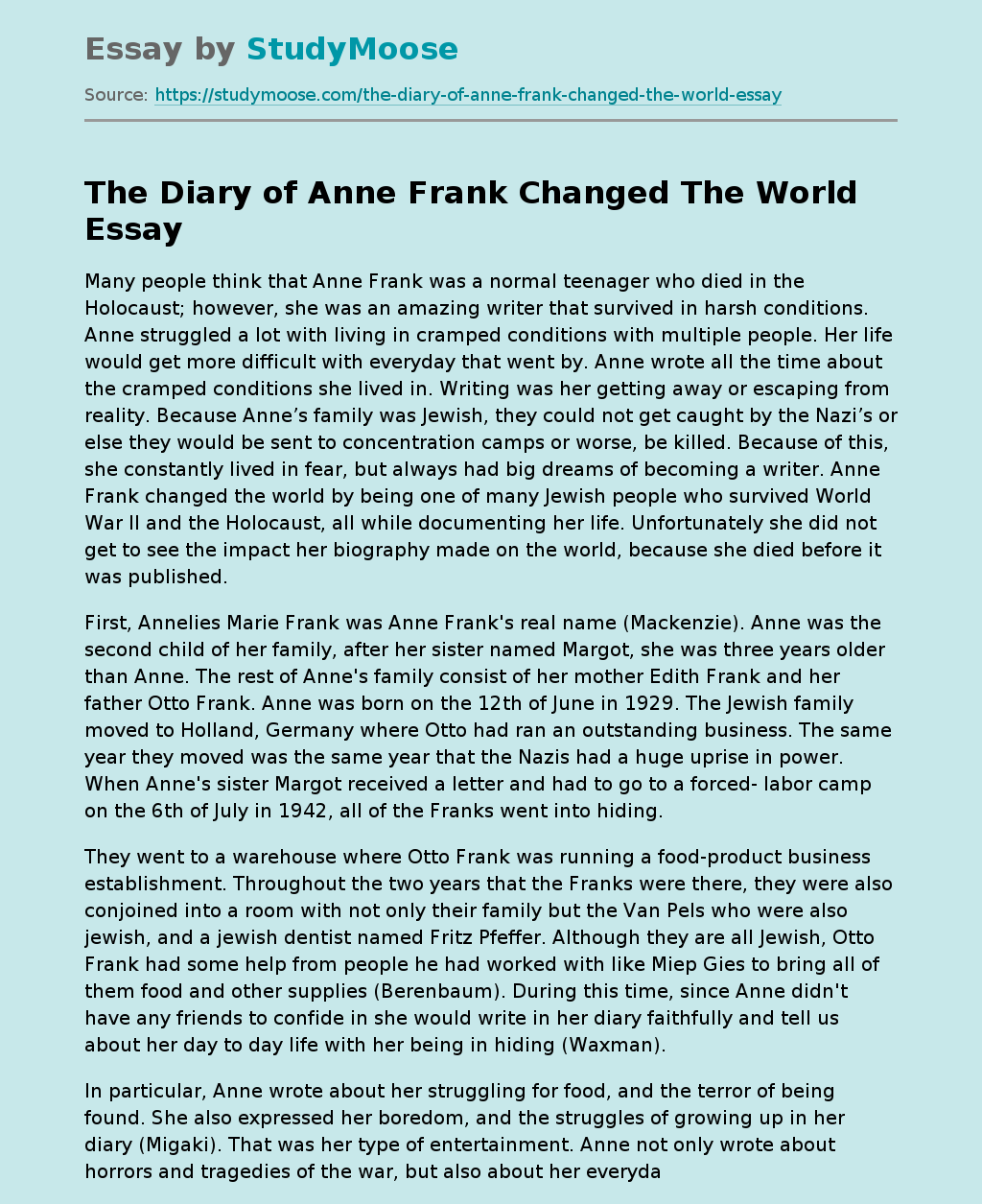