The Diary of Anne Frank is a remarkably moving book about the short life of a young girl and her family. The Holocaust was a horrible time for Jewish people and Anne and her Jewish family’s lives were completely turned upside down as a result. The war resulted in the deaths of countless people, mostly innocent people. Before the invasion on D-day and the end of the war not too long after, the rest of the world didn’t know the real disaster going on over seas.

Anne Frank’s once secret diary has introduced the immense suffering and horror that occurred during the Holocaust.

Anne Frank was only thirteen years of age when trouble began to arise. Adolph Hilter’s reign in Germany had become more powerful and people were falling under his evil spell. People were forced to believe that the Jewish race was inferior and needed to be destroyed. It is believed that Hilter hated Jews due to the fact that they were successful in a time where most Germans faced tremendous hardship, therefore jealousy.

Jewish families tried to escape to surrounding countries to be safe. Some of Germany’s neighboring countries were sucked into the war and experienced great loss.

When things started to get bad in Germany, Jewish families received “call-ups” in which family members were requested by the Nazi’s. Anne recalled that the first call-up in their family was for her sixteen year old sister Margot. The worried young girl of thirteen stated in her diary that day “Margot is sixteen; would they really take girls of that age away alone? But thank goodness she won’t go, Mummy said so herself; that must be what daddy meant when he talked about us going into hiding”.

The Frank family then proceeded to send their belongings to different friends and neighbors for safe-keeping as they prepared to relocate. They had a detailed plan for going into hiding, from location, to essentials, to receiving goods. They would live in a confined space which they called the “secret annexe” with the Van Daan family. Thursday, July 9, 1942 was the day the family left for hiding. It was the last of the normalcy Anne knew and the beginning of a long three years in hiding.

Anne was a very intelligent young lady and although she had her fair share of crazy ideas, she was quite mature for her age. She had a few close friends and the boys at her school seemed to be pretty interested in her, although she mostly ignored it. Leaving that all behind was hard enough for a thirteen year old girl but to go through one of the most confusing parts of her young life in this new unfortunate situation was even harder.

Anne had a close relationship with her father, whom she adored, but not so much with her mother. Throughout many different parts of the story does Anne mention her disliking for her mother, including when she says “Margot and Mummy’s nature are completely strange to me. I can understand my friends better than my own mother – too bad!(42)”

During her time in hiding Anne goes through phases of disliking her mother, disliking her father, and disliking just about everyone in the annexe. Through becoming a teenager she is desperately trying to find herself and her purpose in life. The adults constantly put her down and make her feel stupid. Anne writes in despair “If I talk, everyone thinks I’m showing off; when I’m silent they think I’m ridiculous; rude if I answer, sly if I get a good idea, lazy if I’m tired, selfish if I eat a mouthful more than I should, stupid, cowardly, etc., etc.”

She feels very putdown and discourage by the people surrounding her 24/7, that is until she finds comfort in Peter. Peter Van Daam was hardly of any interest to Anne upon meeting him but as the days dragged on in the secret annexe she finds herself intrigued by him. After spending some time together they develop a deep friendship, which leads to a loving, intimate relationship. Peter is Anne’s stronghold; the one person to get her through each and every day. 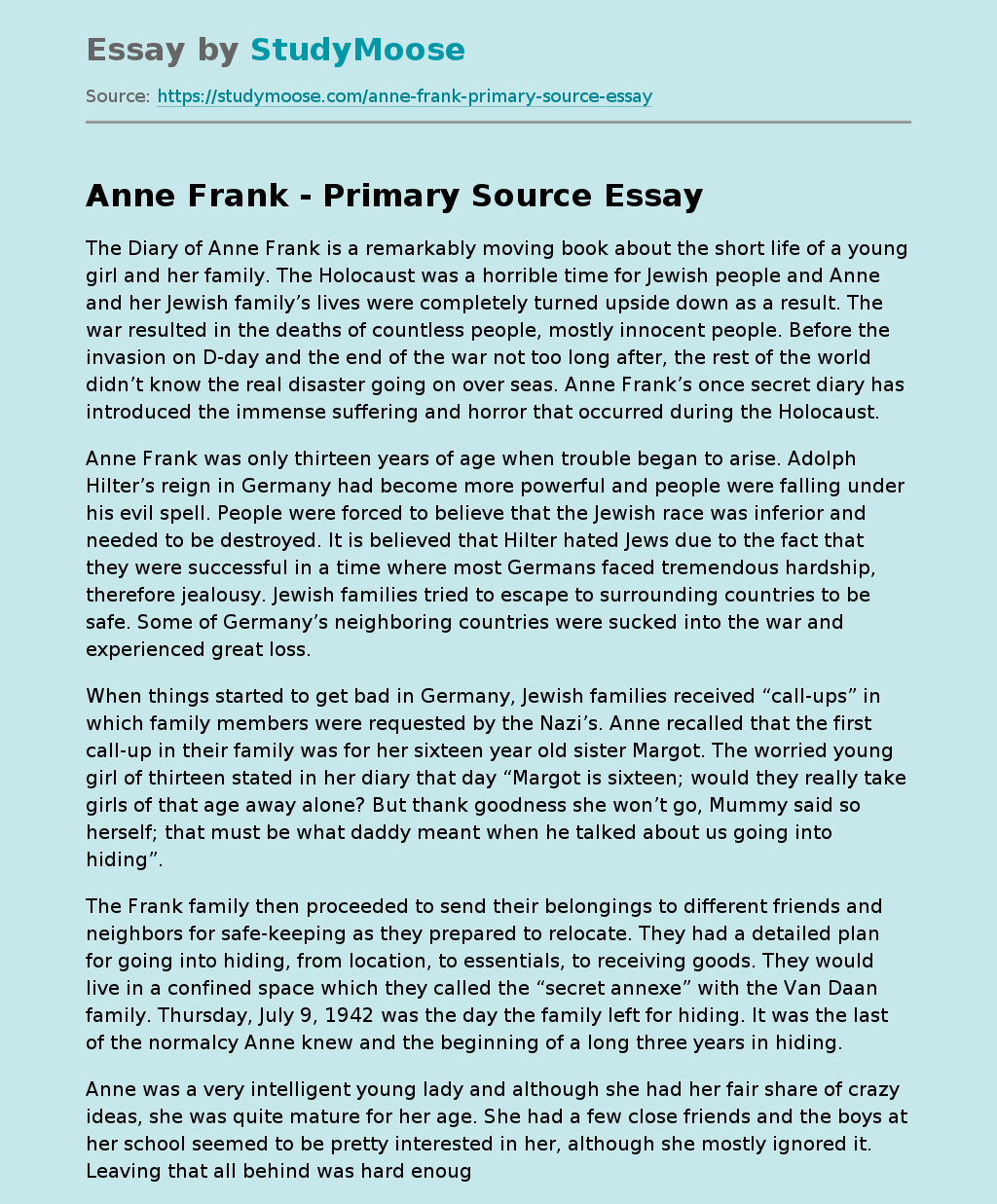