Anne Frank is the diary of a little girl following the events surrounding a thirteen year old girl who grows up Jewish and lives in Amsterdam during the Holocaust. As the events of World War II began Anne was a typical girl who attended school and was aware of the war and world around her, but at the time, wasn’t very fearful for her safety. Unfortunately, reality struck Anne as the news of World War II progressed, accompanied by the call for her old sister to be taken away to a concentration camp.

Suddenly, the world as Anne perceived it would change dramatically. Soon, they were living in an annex, an addition to a building, hiding from the SS officers of the Nazis. The diary of Anne Frank gives an insight to the Jewish perspective of the Holocaust and the prejudice and discrimination not only that the Jews underwent but of others in the society as well.

As I read the diary of Anne Frank I began to learn what so many of the Jewish people had experienced during World War II.

Anne started writing in her diary when she first received it for her birthday. Her diary recalls many of the feeling and events that Jews felt during World War II. I learned that Nazi’s discriminated against Jews in a multitude of ways. First, they were forced to wear yellow stars to signify if they were Jewish or not. Also, All Jews were forced to hand over all bikes and were not allowed to ride the streetcars anymore.

In addition to those restrictions, Jewish people were only allowed to attend certain schools and restaurants. Like many Jewish people, Anne seemed calm and unafraid of the World and the war. She looked at hiding from the Nazi’s as an adventure. This would be short-lived as she soon realized that being trapped inside a room with other families can be frustrating for a young girl. She envied others outside that still were allowed to play freely. She soon realized that her life was at risk every day.

While hiding in a secret annex for a little more than two years, Anne wrote a lot about her feelings and events of her time in solitude with her family and others. Frustrations run high when emotions run high and there is no privacy to escape to. “I see the eight of us in the Annex as if we were a patch of blue sky surrounded by menacing black clouds… [They loom] before us like an impenetrable wall, trying to crush us, but not yet able to. I can only cry out and implore, ‘Oh ring, ring, open wide and let us out!’”. This passage was the most meaningful to me, I learned about the fear that All Jews in hiding must have faced. I learned that every day for two years Anne and her family lived in fear, afraid that they would not be free, afraid that they will not see each other again, and afraid that they will not survive. Every time a bomb raid siren or something as little as a knock on the door went off, complete fear would set in. The longer the war went on the more afraid they became that they would be caught and killed. Having to live life that way for so long must have taken a tremendous toll on a person.

The events that Anne frank describes in her diary are very important. The passages in her diary portray discrimination in its purest form. The diary shows the prejudice and discrimination that millions of Jews underwent. It shows to the rest of the world how people can act. It is eye opening to how people treat others in today’s society, but most importantly it gives us insight to ourselves and how we have been treating others. It shows how one person’s beliefs can be passed on to an entire society and can cause so much hate to a particular group. “I keep trying to find a way to become what I’d like to be and what I could be if… if only there were no other people in the world”. Anne’s last sentence is very meaningful and moving. It says that there will always be good and bad people in the world, and that the only way that there will be no bad people is if she was the only one left. It also says that no one can really ever be who they want to be because of the unscrupulous people in the world. Until we can rid people of prejudice and discrimination we will never be able to achieve the things we want to. 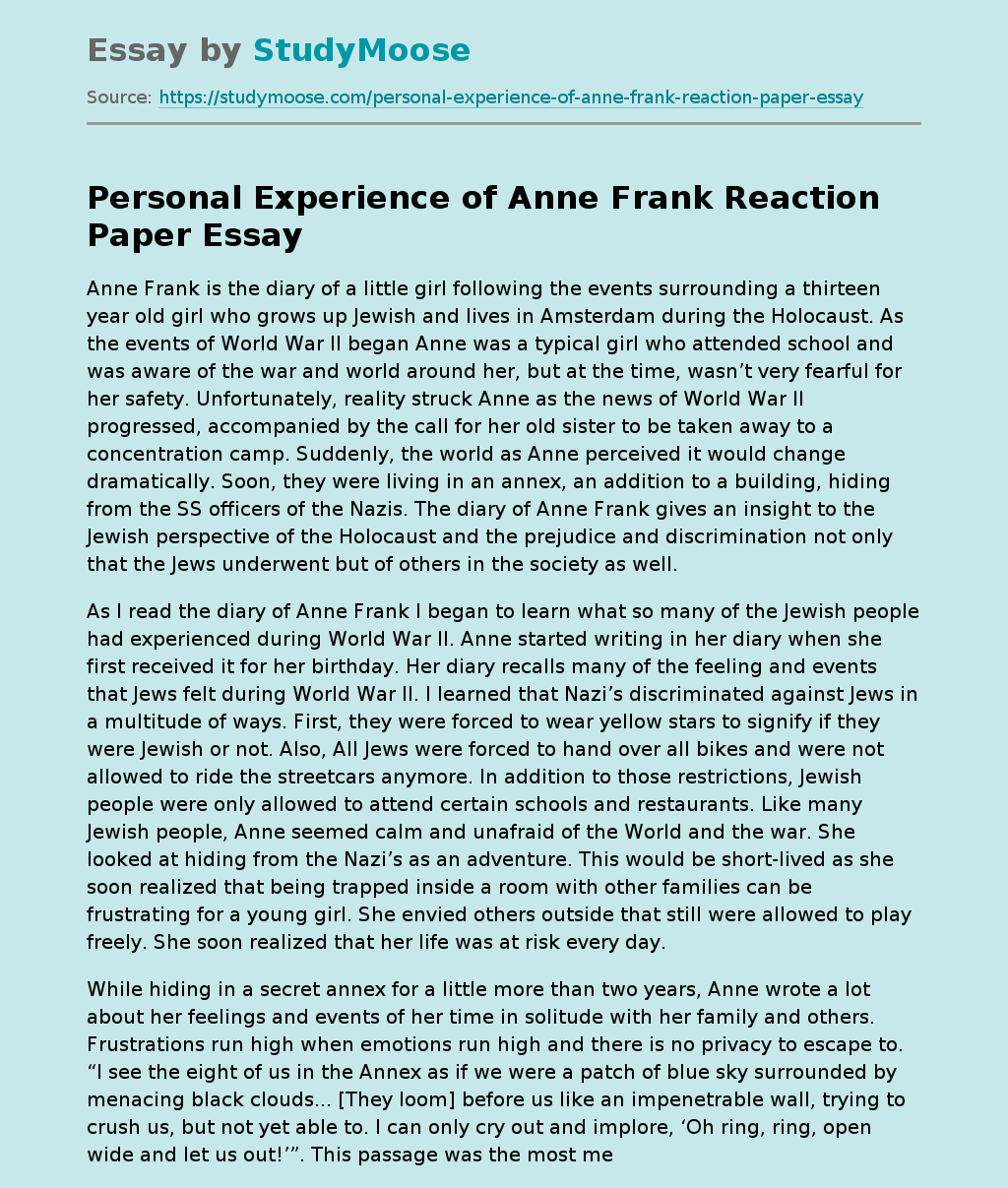