The Diary of a Young Girl is one of the great works of literature the is common to nearly every junior middle school or high school in the nation. Over the years, millions of students, and thousands of teachers, have read through the diary, and found it to be a voice of positivity during one of the darkest hours in all human history. Indeed, one idea that is commonly thought of by anyone who has read the book is that it presents a mainly positive story of a family daring to exist in spite of the menace of the Nazis and Nazism all around them.

While elements of the book powerfully illustrate the life and problems of a Jew living in Europe during the Holocaust, and while the book could not have been written but for the fact that Holocaust took place; calling it a “Holocaust” work is challenging. This is especially true if one considers how the Holocaust is commonly portrayed in the media.

Instead, it would be more appropriate to see the book as a detailed glimpse into the author’s mind. That is, it looks into the mind of a young woman who at a very critical period of her life when she was not only having to deal with becoming and adult but doing so in the middle of a war. However, what was written in her diary cannot not be interpreted as the whole and complete story. To be sure, we do not see in the diary, what happens to Anne Frank after her arrest; we do not encounter her time as a prisoner in the concentration camps through her diary; we do not come to the end of her days in her diary.

This is very different from what we see with Elie Wiesel’s father. We know in that story, that Wiesel’s father vanishes from a bunkroom one dark night because he died from dysentery.

It is true that Frank wrote about her observations in life, making sure to showing the “comical side of life in hiding” (Frank 241). However, the comedy that emerges from her writing is the type you laugh at only uneasily, as you hope you never have the same experience.

What does the diary tell us? There are moments of deep suspense, as one might expect when two Jewish families are hiding in plain sight in a city overrun by Nazis in the middle of World War II. However, much of the diary has very little to do with Germany or the Nazis. Indeed, much of the writing is of a more personal nature. At times, Anne writes about her own sexual curiosity, which would be natural for someone of her age. There are other moments when she shows idealistic leanings that contrast with her darker moments. She writes, as most of us would in a diary, about the fear, joy, obsession, and worry we experience. There are nights, however, when she writes of the war such as when the bombings shake her house. The fact that the families have to leave the toilet unflushed for hours, after eight people have used it, provides an illustrative image of their life in hiding. That is, they must endure large, small, and constant hardships such as the smell from the meal of spoiled potatoes and boiled lettuce everywhere, but not being allowed to open a window.

With that said, the commercialized version of the diary is not the version one sees when upon picking up the book. The death of Anne Frank turns out to have been somewhat ironic; at the point when she finally passed away, the German was nearly defeated, and the Russian Army had almost reached Auschwitz. Anne was transferred to Bergen-Belsen, since the Nazis were trying to destroy all evidence of their activity in Auschwitz before the Russians could expose their plot. Accordingly, it was not a gas chamber or a death squad that took the life of Anne Frank; it was the illness typhus epidemic. This sort of anger was common to of the Nazi practice of housing many people so close together, with little attention paid to matters as basic hygiene. Indeed, Anne Frank was not picked out for selection, she was not tricked into the “showers” that marked the end for so many, nor was she hung.

There was never a way out of this situation for Anne Frank. It was her fortune to die as she did. This is what makes any attempt to turn the book into some sort of inspiring document fail. How can a disconnected diary of a young woman who had no chance to survive turn into a motivational text? If anything, the book can be seen as a tribute to the utter absurdity of both that part of history and our own part. That is, today when speaking of the Holocaust, there are always two perspectives. On the one hand, there are the Holocaust survivors. On the other hand, we have the Holocaust deniers. Their interactions have created a strange version of the Einsteinian paradox in which a person would not continue to exist if he encountered a different version of himself as a result of time travel.

When we turn the story of Anne Frank into a cute memoir of a brave girl hiding inside a wall, we take the story of Nazi Germany and we turn it into a sort of Nancy Drew mystery. If we are willing to look at the story as the reflections of a young woman who saw nothing good ahead of herself but, still had the natural thoughts of a young teenager. She notes that “in the evenings when it’s dark, often see long lines of good, innocent people accompanied by crying children, walking on and on, ordered about by a handful of men who bully and beat them until they nearly drop. No one is spared. The sick, the elderly, children, babies, and pregnant women – all are marched to their death” (Frank). There is nothing cute in this representation; there is nothing motivational. Instead, there is just pure representation of facts.

Representation of what fact, you might ask? The bleak reality of the Nazi regime was that there was no way out as long as Hitler remained in control. Every time we turn a story like that of Anne Frank into an object of commercialization, we ignore the lesson that that story would and should actually teach us. 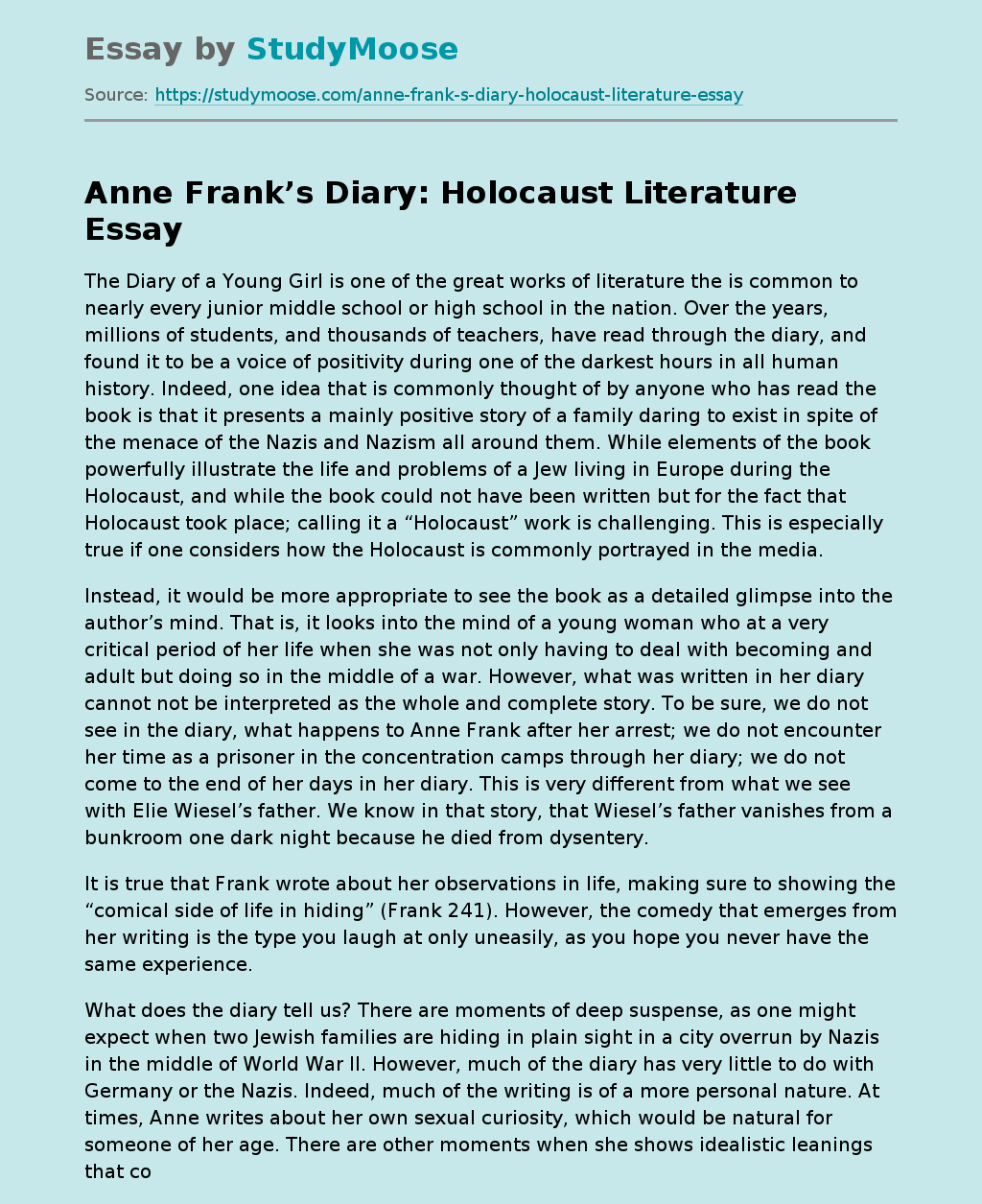