Discuss the significance of the relationship between Emma and Frank Churchill

“Had she intended ever to marry him, it might have been worthwhile to pause and consider, and try to understand the value of his preference, and the character of his temper”. Discuss the significance of the relationship between Emma and Frank Churchill in the light of this comment.

Jane Austen explores the themes of love, social class and misperception in Emma. Emma and Frank Churchill’s relationship is based on lies and deceit. Emma see’s Frank as a potential love interest, because they both belong to the same social class and they would make a perfect match, this gives us an idea about the principals behind marriage and the importance of social class.

Don't use plagiarized sources. Get your custom essay on
“ Discuss the significance of the relationship between Emma and Frank Churchill ”
Get custom paper
NEW! smart matching with writer

It also goes to show how even though Emma does not socially need to secure her place, being a woman she still feels the social pressure to think about ‘the perfect marriage’. Frank is at first presented to us in a very mysterious way, we know little about his character, however throughout we learn little truths about his character in social gatherings, his interaction with Emma and especially in Mr.

Knightley’s view of his character. Frank Churchill slows Emma’s journey to self realisation, by giving her this illusion that he loves her and with a letter conveying his true intentions her illusion is finally shattered.

Emma’s view of his character is based on social class and his refined appearance, all the times she see’s him in a negative light she justify’s his behaviour.

There was a part of her that saw him for what he really was. The fact that she questioned his actions, morals and intentions every now and then show us that she was somewhat aware of his thoughtlessness. However although she realised it at a deeper level, on the surface she spent her time justifying his questionable behaviour. This shows her use of imagination to paint an image of reality that works for her. The way Emma interprets reality according to her own needs without any regard for the outside reality and all the characters present within it, is similar to Frank Churchill; who takes this a step further and behaves in thoughtless ways without filtering reality but altering it by behaving in deceitful and thoughtless ways.

This also tells us that at this point in the novel Emma is starting to mature and her understanding of character is slightly clearer. However, her relationship with Frank Churchill only slows down Emma’s realisation, because their interaction is based on illusions that keep Emma from figuring out the truth about her own feelings and Frank Churchill’s. His character is first introduced in a very one dimensional light from Emma’s point of view, there is a focus on him being “well bred”. His descriptions are centred around the idea of his refinement and elegant air “height, air, address, all were unexceptionable…”. This characteristic of refinement was often linked to social class, and can be seen in Mr. Knightley, and language and dialogue also emphasise this distinction of classes.

We see the truth behind Frank Churchill’s careful presentation of himself as conveyed and noted by Mr. Knightley. Emma takes note of his careful presentation; “Emma was directly sure that he knew how to make himself agreeable” however she tries to avoid the truth by seeing things through the filter of her imagination. Through their interaction, Mr. Knightley’s role as the voice of reason is further emphasised. She dismisses parts of Frank’s character that appear thoughtless and selfish, mainly because she see’s him to be the perfect match for her, if not in terms of marriage then acquaintances. Emma’s character is seen at the centre of Highbury, and since Frank was known to be the “boast of highbury” even before he visited she may have seen it as a social obligation to get to know the mysterious character of Frank Churchill. He had been the talk of the town before even visiting, through letters Austen introduced us to his character, using letters as a way of showing the importance of gossip in a small town.

Their interaction mainly occurs in social contexts with other characters present, reflecting the impersonal nature of their relationship. W.L. Cross says “Austen’s style is the language of everyday life… she brings together her village folk and their visitors, at the dinner party and the ball, as naturally as they would meet in real life”, and through these social gatherings parts of the characters nature previously unknown is revealed to the readers. Every social gathering provides the readers with more information about Frank’s character and the nature of his relationship with Emma. There are times Austen shows his thoughtless nature, an example of this is when he asks Jane Fairfax to continue singing without considering if she is able to do so without it causing her pain or fatigue. Mr. Knightley steps in here asking Miss Bates to intervene, drawing a strong contrast between their characters.

We also begin to see a pattern in the way he speaks to Emma; he usually follows up everything she says. He deceives Emma in their conversations, making her believe he thinks like her and agrees to everything she says. In their conversations Jane Austen evokes dramatic irony like how he talks poorly of Jane Fairfax yet is secretly engaged to her. He creates another illusion for Emma regarding his love for her; he “made her think that she must be a little in love with him, in spite of every previous determination against it”. He is careful and cunning in his interaction with Emma, and the motive behind their interaction is kept hidden until the letter that reveals their relationship was based on deceit and his personal and social advancement. Letters are a very important symbol as they always reveal important news about characters or events.

This air of importance and ambiguity makes Emma seek Frank Churchill’s friendship and validation, she almost tries to make herself fall in love with him, because she knows they would be the ideal match. Her relationship with Churchill sheds light on the interaction between marriage and social class. The two values present behind Emma’s intentions to form a strong relationship with Frank Churchill are those of securing a social standing and maintaining the social hierarchy of Highbury. Frank Churchill is only concerned with his own plans and continues to deceive Emma until a letter from him reveals the truth. Jane Austen gives us an insight into the intricate social hierarchy and the different considerations that surround marriage, through their relationship the most important theme of marriage is reinforced. Their relationship eventually leads to the shattering of Emma’s illusions.

Discuss the significance of the relationship between Emma and Frank Churchill. (2020, Jun 01). Retrieved from https://studymoose.com/discuss-significance-relationship-emma-frank-churchill-new-essay 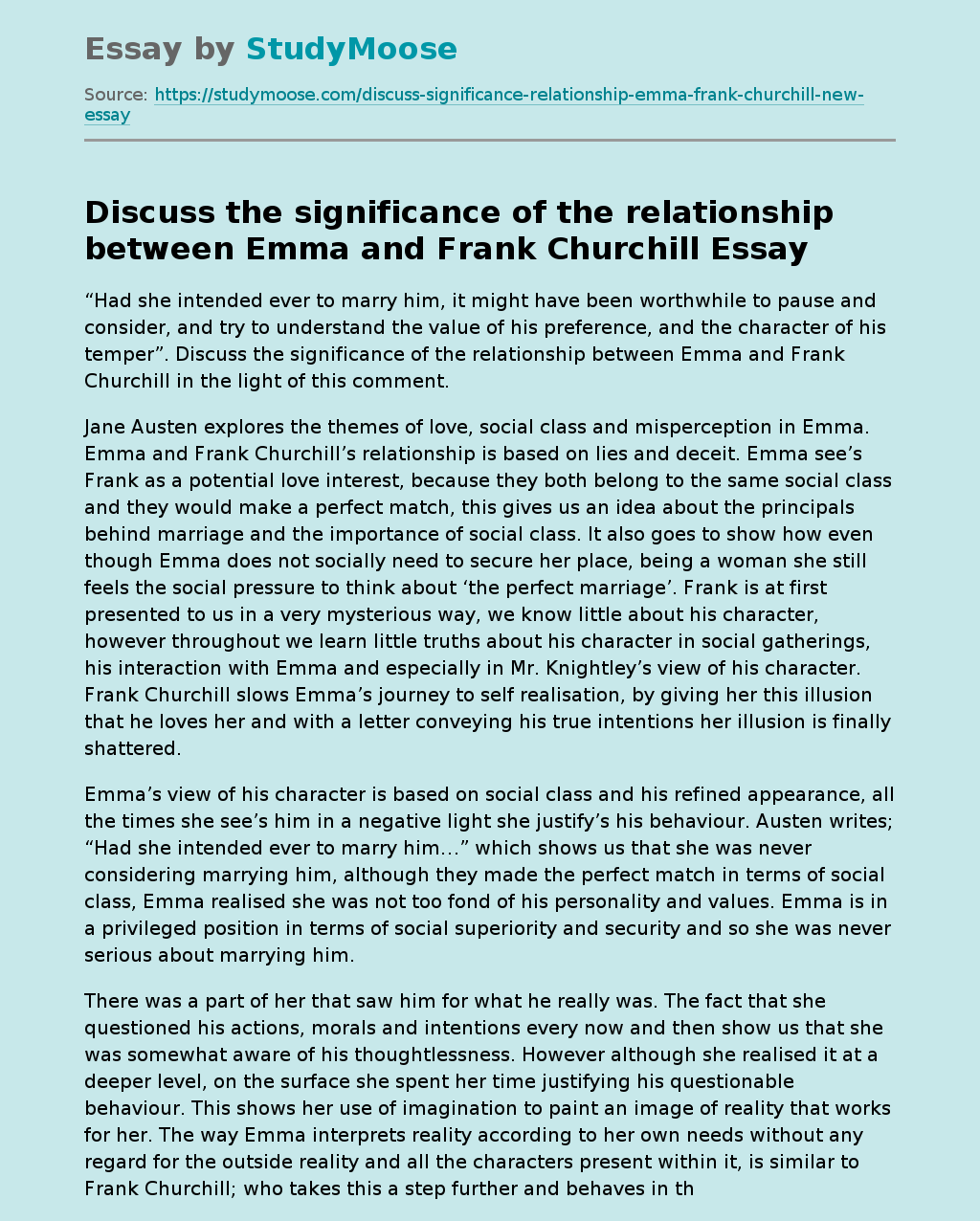