Martin Luther King’s renowned phrase “I have a dream” and Churchill’s equally celebrated “We shall fight” may first appear to be evoking different ideas. This is because, with the former quote coming from a black clergymen leading a non-violent revolution, arousing ideas of hope and determination and the latter being delivered by a white, Head of State leading defence, implying violence and fortitude, these contrasting quotes may evoke a whole host of differences from the neutrals perspective. But after further analysis, from the perspective of political rhetoric, they appear to have much more in common.

Don't use plagiarized sources. Get your custom essay on
“ Compare and contrast the oratorical skills of Martin Luther King and Winston Churchill in their speeches ”
Get custom paper
NEW! smart matching with writer

It is the purpose of this essay to compare and contrast the oratory skills of Winston Churchill and Martin Luther King in their speeches, in order to assess the similarities and differences in the methods of political rhetoric employed. Churchill’s “We Shall Fight Them on the Beaches” speech delivered to the House of Commons of the Parliament of the United Kingdom on June 4, 1940 during the Second World War shall be analysed alongside Martin Luther King’s ‘I Have a Dream’ speech, delivered on August 28, 1963 in Washington, USA during the American Civil Rights Movement.

It it is vital to comprehend that although the speeches are performed under different cultural conditions (there is a twenty three year time gap between them, with this chasm being further widened by the fact that the political leaders have come from polarised social backgrounds) they are both in this case, vying for the same cause under Aristotle’s three genres of rhetoric; deliberative, forensic and epideictic.

This is because both speeches fall into the ‘deliberative’ category, whereby it is envisaged by Aristotle that;

“The deliberative Rhetoric must exhort or persuade his audience, his speech is addressed to a judge of the future, and its end is to promote the good and avoid the harmful. Deliberative rhetoric concerns contingencies within human control. The deliberative orator addresses topics such as war and peace, national defence, trade and legislation, in order to assess what is harmful and beneficial. Accordingly, he must grasp the relationships between various means and the ends of expedience and happiness.”1

Both speeches are examples of Aristotle’s ‘deliberative rhetoric’ as they aim to persuade the audience, are addressed to a judge of the future, and aim to promote the good, whilst avoiding the harmful. It is constituted that MLK via “I Have A Dream” addresses his utopia of equal rights for blacks in America during the American Civil Rights Movement, whereas Churchill in “We Shall Fight Them on the Beaches” underpins the aspects of war and national defence during World War II.

Therefore, it will be argued that despite having different cultural conditions, contexts and aims, both leaders employed similar devices of political rhetoric in order to persuade the audience, because they are both examples of deliberative rhetoric. In order to test this hypothesis the analysis will be divided into three categories in relation to Aristotle’s theory of ‘The Art of Rhetoric’. As a result, it is critical to first comprehend the underlying importance of Aristotle’s theory of rhetoric in relation to both of these speeches as it helps to underpin the methods of persuasion that these leaders demonstrate in their speeches.

According to Aristotle, rhetoric is seen to be “The ability, in each particular case, to see the available means of persuasion.” This led to him establishing his theory of three means of persuasion in terms of rhetoric, these being entitled; “Ethos”, “Pathos” and “Logos”.

Ethos is broadly defined as the persuasive appeal of one’s character and refers to the trustworthiness or credibility of the writer or speaker. Ethos is conveyed through the tone and style of the message and through the way the writer or speaker refers to differing views. “It can also be affected by the writer’s reputation as it exists independently from the message- his or her expertise in the field, his or her previous record or integrity, and so forth.”2 The author’s character is what gives value to the ideas in the argument and thus provides support for the arguments since the audience trusts the speaker. Pathos can be broadly defined as the persuasive appeal to one’s emotions to alter judgment. This can be done through the use of metaphors, amplification and storytelling all of which evoke strong emotions in the audience. “Logos” is the Greek for ‘word’ and is the notion of using reason or proof to construct an argument for the cause. According to Aristotle “logos relates to the speech itself, in so far as it proves or seems to prove.”3 It includes appeals to statistics, logic and objectivity to help underpin the main essences of the argument and involves persuading the audience intellectually through the shape of the prose.

Compare and contrast the oratorical skills of Martin Luther King and Winston Churchill in their speeches. (2020, Jun 01). Retrieved from https://studymoose.com/compare-contrast-oratorical-skills-martin-luther-king-winston-churchill-speeches-new-essay 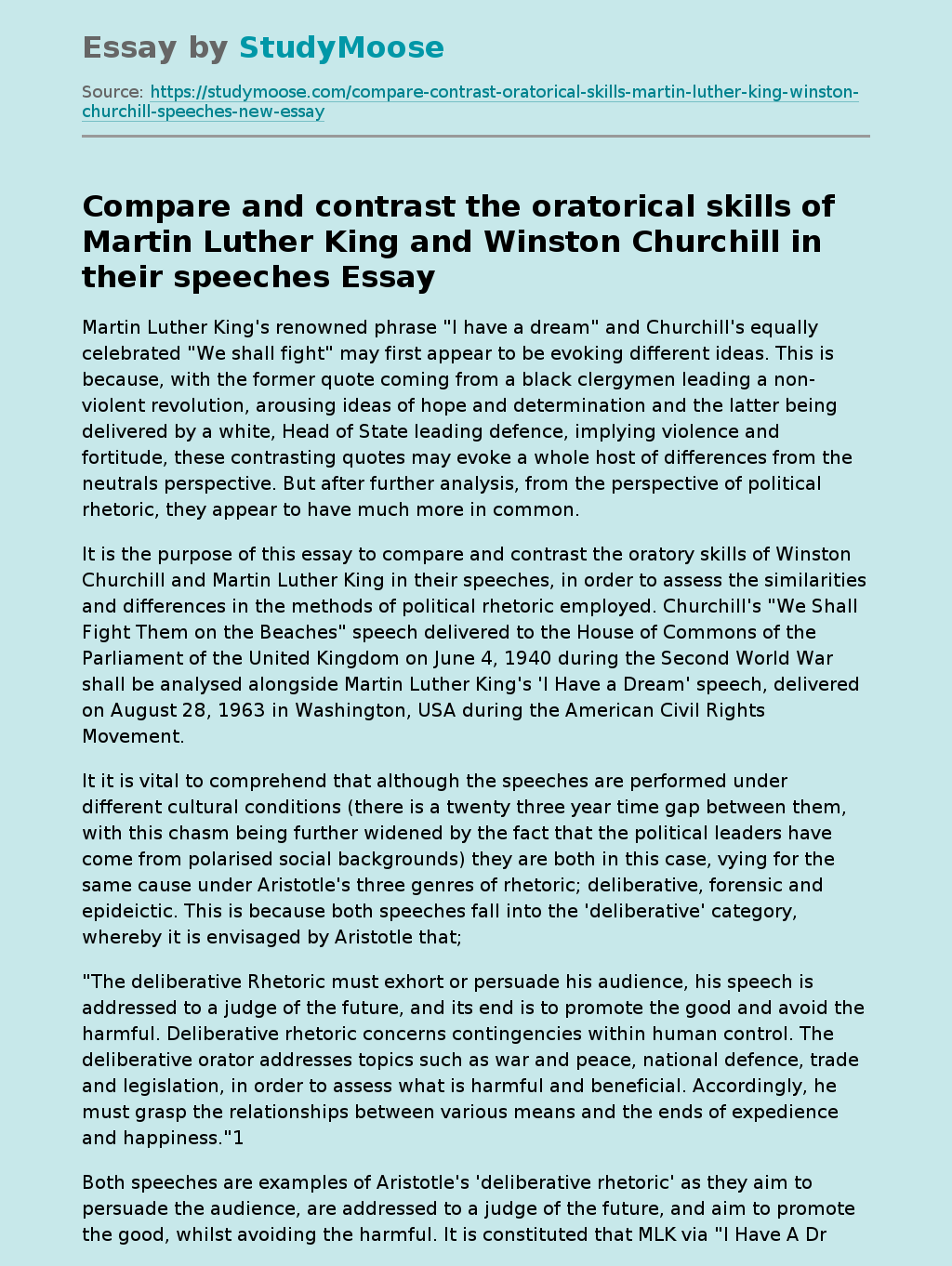