Don't use plagiarized sources. Get your custom essay on
“ Sociological Analysis of Martin Luther King ”
Get custom paper
NEW! smart matching with writer

’s “Letter from a Birmingham Jail” from a sociological point of view and shows how three major theories (structural functionalism, social conflict, and symbolic interactionism) are treated in the letter. The paper shows different appreciation of King’s ideas and works by his contemporaries and modern people. It also explores the concepts of “nonviolent direct action” and “natural law” and determines their importance in the civil rights movement.

Martin Luther King Jr.’s “Letter from a Birmingham Jail” is important from both historical and sociological points of view. It is an example of self-sacrifice for the idea of ​​equality and brotherhood of all people. Formally, King addresses to eight pastors who oppose the protests. In fact, he applies to everyone who does not approve racism, but considers methods of nonviolent struggle to be too radical.

From a sociological point of view, the “Letter from a Birmingham Jail” shows the way of nonviolent adjustment of the social conflict and stages of this way: “collection of the facts to determine whether injustices exist; negotiation; self-purification; and direct action” (Martin Luther King, Jr., 1963). In the Western world, he was the first to show that the fight does not necessarily mean violence.

Thus, it is possible to say that King’s method of nonviolent direct action was decisive in the civil rights movement. Sociologically, the “Letter from a Birmingham Jail” illuminates the idea of structural functionalism. It can be noticed that the structural system of society does not work harmoniously. People of African or mixed origin cannot attend the same schools, sit in the same parks, eat in the same restaurants, or enjoy the same drinking fountains as whites. They live in different areas and attended different churches. If they need medical assistance, they cannot go to the same hospital as whites. When they die, they are buried in different cemeteries. Families of color are forced to bring up their children in a humiliating and insulting atmosphere. The state and authorities, as one of social factors, support the racism. The clear examples were dishonest courts and cruel, inhuman actions of the police. Promises to restore justice and equalize the rights of white and colored residents do not mean anything. Church leadership prefers to stay aside the civil problems.

Martin Luther King Jr.’s “Letter from a Birmingham Jail” clearly shows that the church acts in a cowardly manner concerning the issue of racism, supporting the state law, but not the moral one, which claims that all men are brothers. Such a mechanism of society does not function properly because all of its elements are deformed. The deformation is caused by the pressure of state authorities and lack of justice, which was caused by the social conflict. Birmingham can be called a hot spot, where the conflict between the white and colored population was on the brink between the peaceful actions and open battles. The long-lasting conflict influenced the symbolic interactionism. This theory shows that social interaction is based not on the way human beings sense their environment, but on the way they define the environment and each other. In this situation, the colored people define the whites as oppressors and themselves as the oppressed ones. All this affects their perception of the world and brings the feeling of inferiority. Thus, it can be noticed that all three social theories are intertwined. The elements of society do not function in harmony. As a result, the social conflict arises affecting the outlook and symbolic perception of people.

Modern society supports King’s ideas and considers him to be a national hero. However, he often found misunderstanding among his contemporaries: “King’s nonviolence played into the hands of segregationists” (Mott, 1975, p.411). Peace and brotherhood cannot be achieved through aggression, so King chose the strategy of nonviolent direct action. A heightened sense of injustice, sympathy to his friends, family and even strangers encouraged King to start nonviolent direct action. He understood that racial injustice always goes hand in hand with economic one. It was of vital importance that King fought not only for the rights of people of color, but also for the rights of all the exploited people. It shows his understanding and love for people. The letter itself is written in an ethical and non-aggressive manner.

Thus, it does not alienate people from King, but convinces of his rectitude and calls for peace. Aggression and violence would only lead to human victims and, possibly, to another civil war. King’s tolerance managed to convince many people to switch over to his side. For example, Catholic bishop, Joseph Aloysius Durick, who became a staunch defender of civil rights, was inspired by King’s “Letter from a Birmingham Jail” (Rychlak, 2011). Nonviolent direct action is not the way of the cowards who are afraid to fight, but action that requires patience, strength and courage. A person should not submit to any injustice. The struggle should be directed not to the violence, but to conviction. Even though nonviolent strategy is a struggle based on the outrage at injustice and violence, it does not fill the fighters with anger and hatred.

Thanks to the consistent nonviolent actions in cases of intra-national conflicts, there remains the rule of law and human dignity is protected. Another discussed concept in King’s “Letter from a Birmingham Jail” is the concept of “natural law”. Chuck Edwards (2008) and Ronald J. Rychlak (2011) dwelled their articles on this idea. Actually, King did not invent this concept, but reminded about it in the times when civil laws contradicted the main natural law: all people are born equal. It is a concept that most people understand and agree to. King does not encourage people to break the law, but acts against humiliating and segregation laws. Martin Luther King, Jr.’s “Letter from a Birmingham Jail” played a determinant role in the civil rights movement. He showed how nonaggressive actions help to achieve peace and equality.

Faith and love for people helped him in his mission. His movement did not aim at conquering anyone else. King wanted the liberation of American society and all the population to participate in the self-liberation. His “Letter from a Birmingham Jail” proved that all the elements of society, such as family, government, and religion, play an important role in the formation of every personality and society as a whole. Only social group where civil laws are not contrary to the natural laws is able to live in peace, change and develop. 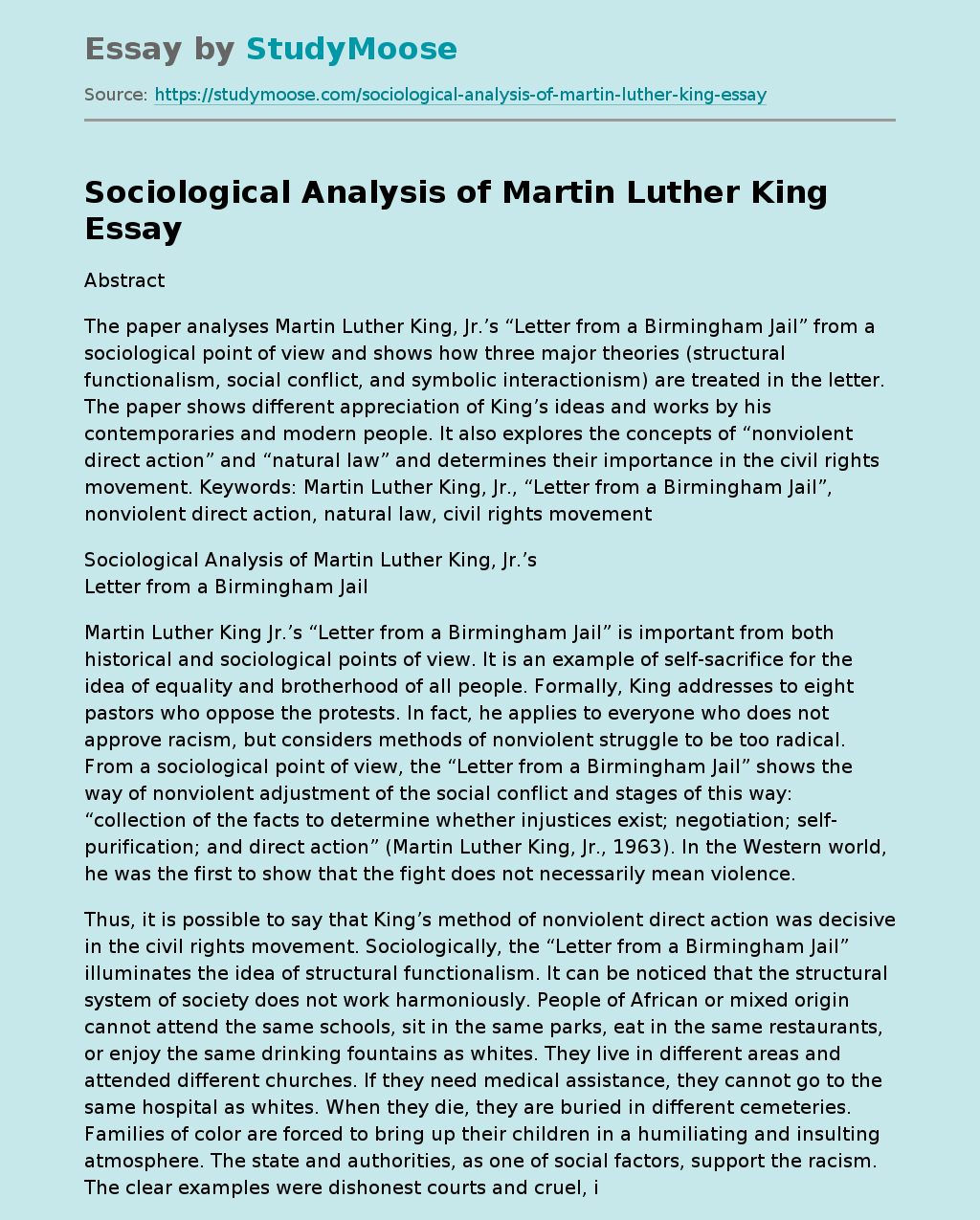