Malcolm X Vs. MLK JR
Extremist, or peace maker? That is the true difference between the beliefs, and ideals of Martin Luther King Jr. and Malcolm X. Both men were African-American civil rights activists during the 1950’s and 1960’s, and both wanted to be accepted for their race, but they wanted that acceptance in very different ways. The two men had very diverse beliefs, Malcolm being a devout Muslim and King being a Baptist clergyman, their religions played a big part in each of their views and how they went about achieving their goals.

Don't use plagiarized sources. Get your custom essay on
“ Martin Luther King vs. Malcolm X ”
Get custom paper
NEW! smart matching with writer

This is where their ideas differed, and why they wouldn’t technically be considered same, or “fighting for the same cause”.

Malcolm X was considered an extremist for a few main reasons, one being that he wanted complete segregation from the white race. He believed that African Americans were so mistreated that they should be completely shut off from the white Americans. In his Declaration of Independence (1964), he states that the “best solution is complete separation, with our people going back home, to our own African homeland”.

He wanted himself, and all other blacks to be sent to their ancestor’s land of Africa where they could live among other blacks, where they wouldn’t be thought of as a lower class, but as equals. Although Mr. X wanted equality for blacks and whites, he still believed that there should be segregation; he wanted both races to be “separate but equal”. In the sense of violence, X didn’t promote the use of violence, yet he did believe that man should be able to “defend himself when he is the constant victim of brutal attacks”.

In the end, Malcolm wanted a place of acceptance, and a place where he could be somewhat at peace with what he considered his own kind.

Peace is what brought Martin Luther King power in his speeches to the people of America. Like extremist Malcolm X he wanted acceptance for himself, and all of as he’d put it “brothers, and sisters”. The King’s speeches were very motivational during their time, and so uplifting that it’s generally believed if not assassinated complete freedoms for African Americans would’ve been accomplished much sooner. King believed he could achieve his dreams and goals of having whites and black living together in harmony and peacefulness through nonviolent protesting and also by educating the public.
Martin Luther King wanted acceptance just as Malcolm X did, but they wanted it in two very different ways. King wanted it through peace and unification with his fellow Americans, while Malcolm wanted it through rioting, and force of opposition.

It might seem like Martin Luther King Jr. and Malcolm X fought for different things for the African American people, but in all reality it comes down to the simplest form of an idea. They wanted acceptance. Without acceptance both causes were completely lost, no matter the arguments made, and the battles fought. Till acceptance was granted, all was lost. That’s why the differences of Malcolm X, and Martin Luther King Jr.’s differences are what united them, giving them their ultimate similarity. 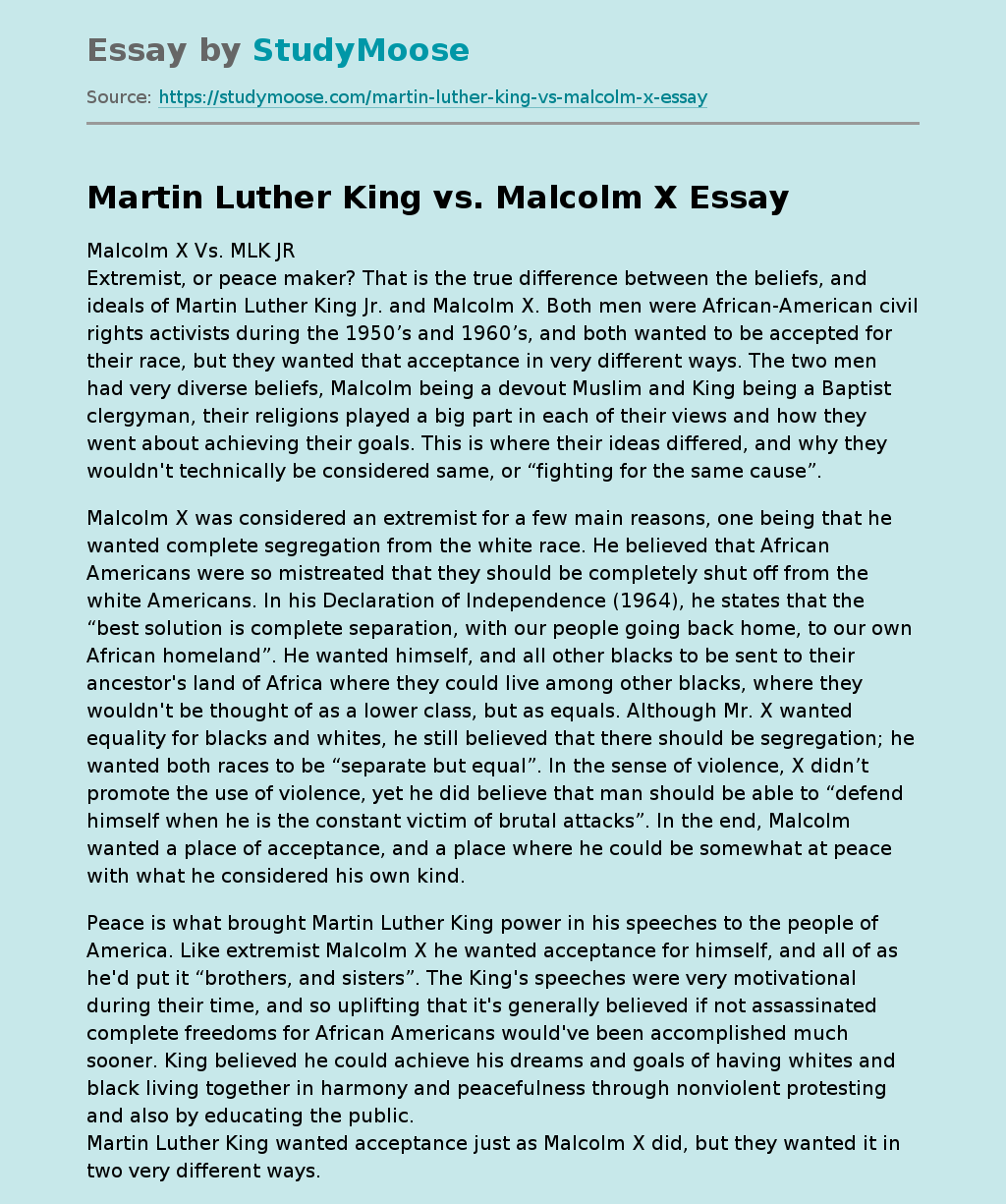