In the history of the American civil rights movement, two seminal figures emerge: that of the peaceful and nonviolent Martin Luther King, Jr., and the revolutionary and radical Malcolm X. From these two contrasting images, America did not know how exactly to classify the movement. On one hand, Malcolm X preached independence and a “by any means necessary” approach to achieving equality in America. And on the other, King preached a nonviolent, disobedient philosophy similar to that of Gandhi in the achievement of Indian independence earlier in the century.

Don't use plagiarized sources. Get your custom essay on
“ Compare the strategies and goals of Dr. Martin Luther King Jr. and Malcolm X during the Civil Rights Movements ”
Get custom paper
NEW! smart matching with writer

While most students are familiar with King as a civil rights leader, most are equally uninformed about the impact of Malcolm X in the African-American struggle for equality and freedom. And while there is much to learn from the two contrasting philosophies and approaches to change of each man, there are common threads that unite them: namely, a combined religiosity with political leadership that morphed into a demand for social and economic equality.

Despite their differences, King and Malcolm X represented the same cause, and with the achievement of the movement, left a similar legacy to generations of Americans seeking change in their own time. However, from a comparative perspective, one cannot imagine a civil rights movement without the tactics King favored, or a successful movement characterized by the kind of violence and hatred advocated by Malcolm X.

When one is asked to think of a comparison between two alternatives and which of the alternatives is “better”, one ought to imagine which alternative would produce the better outcome.

A better outcome in any struggle for political change is one not characterized by widespread violence. Dr. Martin Luther King Jr.’s childhood and young adulthood were exemplified by his work within the system, achieving prosperity through education and thinking, not through the violent struggle for existence like in the case of Malcolm X. In King’s “I Have a Dream” speech, he invites the listener to imagine a future in which Black children have an equal opportunity at achieving prosperity through education and hard word: an example of an equal chance not available at that time. Achieving this required nonviolent means consistent with the principles King adopted through his time studying Gandhi and civil disobedience. King called on people to be disobedient for the cause of racial equality, whereas Malcolm X called on people to be violently forceful'”in opposition to any kind of representation of white power'”for the cause of Black power. Unlike King, Malcolm X’s message did not convey a message of equality, but of hateful lashing out against an institution with the power to crush violent opposition. Like Gandhi, King insightfully recognized the efficacy of disobeying the system as a means of changing it. Violently attacking the system would only invite violent attacks back, and would, in the end, make the problem worse for Blacks.

While Black militancy is understandable given Malcolm X’s history and his perception of the problem afflicting Blacks at the time, the better means of achieving Black rights was through nonviolence: specifically, boycotts, demonstrations, and marches. Dr. King welcomed participation from all people, including whites and other minorities, unlike Malcolm X. In historical reflections on the civil rights movement, it took both Blacks and whites (working within the white power structure) to achieve the desired outcome. For instance, white New Yorkers Michael Schwerner and Andrew Goodman were killed by Klansmen in Mississippi decided to investigate the burning of a Black church. Viola Gregg Liuzzo, a white mother from Michigan, was killed by Alabaman Klansmen in 1965 when she tried to help Blacks in the South (Maxwell). Thousands of whites worked for Black freedom: an ideological shift supported and encouraged by the kinds of tactics Dr. King advocated. The same cannot be said of Malcolm X, who famously remarked that white people were “a race of devils” (Lomax 57). What white person would be encouraged to work for civil rights given such an antagonistic remark?

Although Black militancy was important in the context of the entire civil rights movement, the retaliatory tenor of Malcolm X’s message was sure to cause opposition from the establishment. The message was also profoundly collectivistic and an antithesis of the American value of individualism (McTaggart). His call for Blacks to come together created a movement for Black socialism in a kind of voluntary segregation. In a way, this defeated the purpose of the civil rights movement, and, absent of the efforts of other, less oppositional leaders, would have probably worsened the problem facing Blacks in America. Forcing the Black community to remain segregated from whites as a whole could have continued the sentiment among racist Americans that Black people are not equal to white people. Dr. King, in contrast, unswervingly advocated for a social conscience in America: drawing attention to the inequalities he witnessed in a number of areas of society. Rather than assuming these inequalities existed and not drawing public attention to them, Dr. King made it his role in the movement to challenge social assumptions about the place of Black people in America. Despite Malcolm X’s enormous influence on the movement, his message was not one of equality, but of retaliation for inequality.

Although both Malcolm X and Dr. Martin Luther King, Jr. were transformational leaders who were instrumental in raising public awareness of a problem of inequality, only King’s methods could have been successful in bringing about the desired outcome of the movement. Applied to the movement as a whole, Malcolm X’s philosophy of violent retaliation would have exacerbated the problem Blacks faced at the time, forcing the white establishment to increase oppression and segregation of the Black community. Because King’s techniques were successful in challenging the establishment, Blacks achieved a number of civil rights not previously available to them. The kind of transformation leader King represents is a rare symbol, and the inspiration he provided to Black people for change still inspires people to strive for equality and freedom.

Lomax, Louis E. When the Word is Given…: A Report on Elijah Muhammad, Malcolm X, and the Black Muslim World. New York: Greenwood Press, 1979.

Compare the strategies and goals of Dr. Martin Luther King Jr. and Malcolm X during the Civil Rights Movements. (2016, Mar 09). Retrieved from https://studymoose.com/compare-the-strategies-and-goals-of-dr-martin-luther-king-jr-and-malcolm-x-during-the-civil-rights-movements-essay 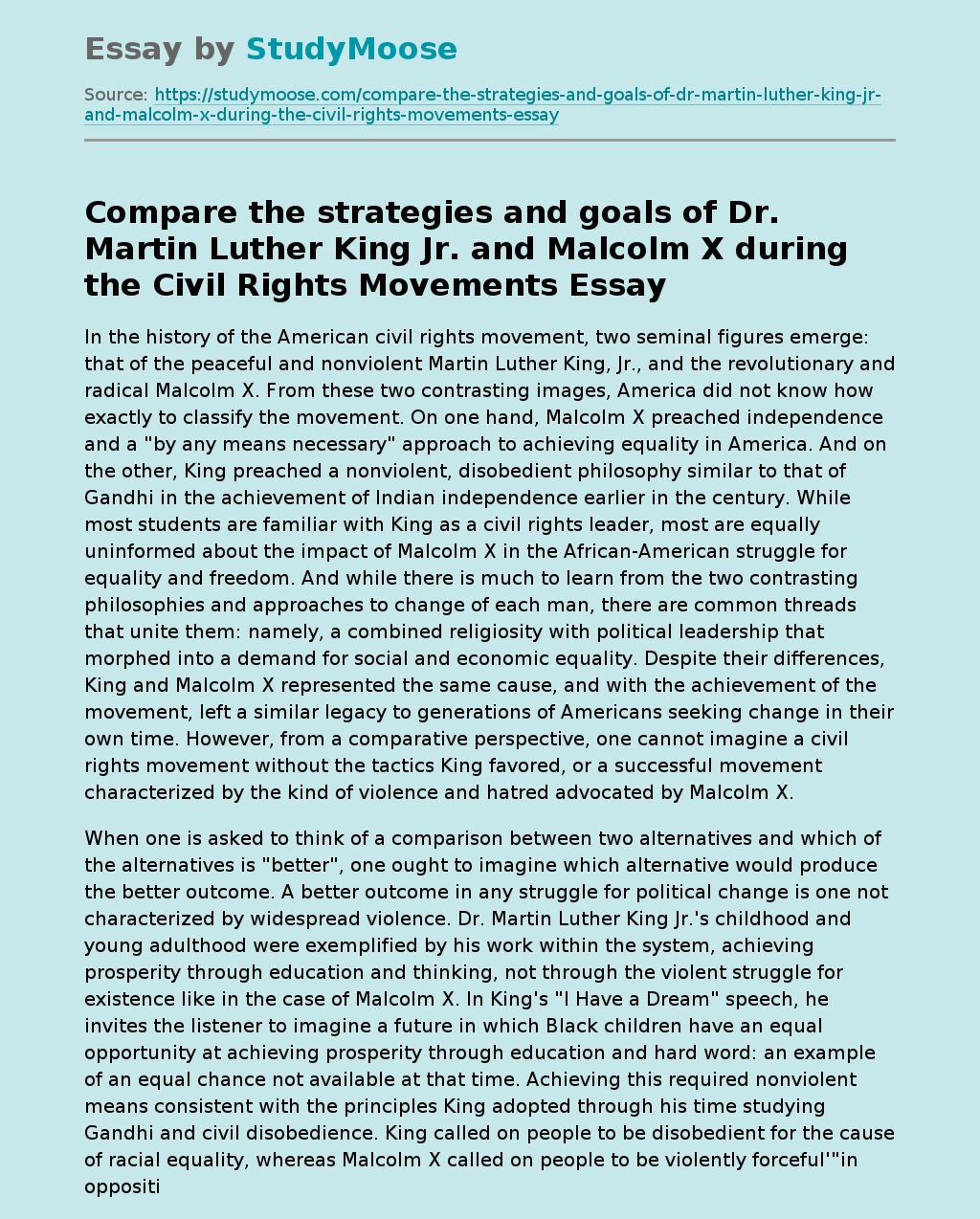