The Biography, Accomplishments and Influences of Winston Leonard Spencer Churchill

Most people live their life without even causing a ripple in the sea of life. Once in awhile, however, a great man comes who will not only create ripples but a tsunami in the history of the world. While he was still living he always spoke about his intention to leave a mark in history. There is no doubt that he was able to accomplish his mission. He is none other than Sir Winston Leonard Spencer Churchill. Winston Churchill’s life can be compared to a roller coaster ride.

Don't use plagiarized sources. Get your custom essay on
“ The Biography, Accomplishments and Influences of Winston Leonard Spencer Churchill ”
Get custom paper
NEW! smart matching with writer

There were moments when he was at the peak of his career as he led the England throughout World War I and World War II.

There were also times when he lost his battles and was forced to leave public office. . Indeed there was never a dull moment in the life of Winston Churchill. He was a good man, a prolific writer, a brilliant public speaker, a strong war leader, and a politician who had a vision for his country.

His main influence is not limited to his writings, speeches and the battles he had won. His greatest accomplishment is his love for freedom that he truly fought for. Personal Background of Winston Churchill Winston Churchill was born on November 30, 1874 Blenheim Palace in Oxfordshire, England.

As the son of famous politician, his parents did not seem to have enough time for him. His mother was also busy as she played the role of the wife of a politician. Also, his first few years in school was marked with disappointment. At the time he attended schooling at Harrow he did poorly in school and even stuttered when he talked.

It was in Harrow where he fell in love with literature. It is here where he showed signs of improvement. After graduating from Harrow, he enrolled in the Royal Military Academy at Sandhurst. This is where he led his class in tactics and in fortifications. Shortly after his graduation, he joined the army. The adventurous boy that he was, he managed to take leave from his post and obtained a work as a reporter. This was the period when young English gentlemen were restless as they sought recognition and fame. (Peter Welsh, 2007, p. )

They thought that fame and recognition will be bestowed upon them if they give service to their country during the war. As a result, Churchill traveled to other countries such as Cuba in search for real action. After leaving the army, Churchill decided to enter the political arena in 1900 as a member of the Conservative Party. Doubtful about his party mates’ desire for change, he switched to the Liberal Party in 1904. During this time he served in different government posts. In 1908, he met and married Clementine Ogilvy Hozier.

Speaking about his marriage, he recounted, “My most brilliant achievement was my ability to persuade my wife to marry me. ”(“Foreign Affairs: Winston Churchill”) Before World War I, the Prime Minister appointed him as the Lord of Admiralty where he was recognized for the development of different weapons that could be utilized during the war such as the improvement of the tank. He was also among the first to recognize the full potential of the aircraft as a weapon. As the British army joined WWI in 1914, Churchill made a serious blunder.

As a result, his reputation as a military tactician was seriously questioned. Consequently he resigned from his post. He returned to the political arena during the 1922 General Election. There were however some serious squabbles among the members of the Liberal Party. As a result, he once again transferred to the Conservative. He was eventually appointed as the Chancellor of Exchequer which is the same position his father held 2 decades before him. After 1929, his political career came to a stop as the Conservatives were defeated in the 1929 election.

His absence from public office for ten years enabled him to give more attention to his writings. It would seem however that Churchill’s political career has not yet ended as Prime Minister Chamberlain appointed him as the Lord of Admiralty during World War II. Perhaps, the prime minister thought that he was the only person who had sufficient experience and knowledge to defeat the Germans. In view, however, of the failure of the Prime Minister, King George VI appointed Churchill as the new prime minister and instructed him to form a new government.

The influence of Churchill as a leader of his country was felt more during the World War II. Faced with aggressive and relentless attacks coming from Germany, he made sure that the British army would be inspired to continue their fight. He made sure that they will maintain their courage that Great Britain is one of the superpowers in the world. In his address to the House of Commons in 1940, Churchill remarked that even if the rest of Europe will fail against the Germans, “we shall not flag or fail.

Even after World War II was ended he made sure to maintain his alliance with the United States to strengthen their military and to protect their economic interest. (Steven Lambakis, p. 109) At the same time he realized that if true and lasting peace will be maintained there must be strong relations between the existing superpowers. He envisioned the future to be a balance among the remaining superpowers who will deal with each other in good faith and in good will. (Lambakis p. 109) Thus, he befriended Soviet Union’s leader, Joseph Stalin.

As a politician, Churchill manifested strength and boldness in his character. His political career was marked by a series of changes of political affiliations. It would seem that he was always willing to give up his party affiliations if he felt that his party members are not doing enough for their country. Despite these changes, he managed to be elected to the Parliament. He also became the president of the Board of Trade in 1904 and served as the undersecretary of State for the Colonies. He also became the Prime Minister of Great Britain twice from 1940 -1945 and 1951-1955.

As a war leader, he also showed courage, strength, and dedication. At the time he took over the position of the Prime Minister, his country seemed to be on the verge of collapse against a determined and relentless German army. Yet with his powerful words, he inspired his countrymen, restored their pride in their country and defeated the Germans. As a public speaker, Churchill was able to overcome his insecurities that he had when he was still young. He frequently stuttered when he was still in school.

Despite these difficulties he became one of the most brilliant and gifted public speakers. As a prolific author and historian, Churchill has written so many books. His skill as a writer was finally given recognition in 1953 when he was awarded the Nobel Prize in Literature. Among his published works were: The Story of the Malakand Field Force, The River War, Savrola, London to Ladysmith via pretoria, Ian Hamilton’s March, Mr. Brodrick’s Army, and Lord Randolph Churchill As an advocate of peace, Churchill inspired his people that liberty and peace is worth dying for.

Because of his leadership he successfully defended England against the attacks of the German army. According to an Inder Dan Ratnu, Indian author, “Churchill’s preserved freedom, enabling it to spread to nations who had made it prisoner‹and many other nations falsifying the cynical belief that might makes right. ” (p. 2) Winton Churchill’s Influences As mentioned earlier, there is none other person in history that had made so much impact not only in his country but even throughout the world other than Winston Churchill.

Churchill’s inspirational words about the importance of freedom reverberated through the world. It made countries realized that freedom is not only for the rich and powerful countries. Even the smallest nations deserve freedom from tyrannical rule. With his powerful words every nation became conscious of how important freedom us and why we should fight for it with our life. Churchill’s exerted a positive influence to the world. His leadership also became a role mode for any leader in the world.

He made the oppressors realize that might does not make right. The fact that a country is stronger and more powerful than other countries does not give it the right to conquer any country that it pleases. At the same time, because of his leadership, the oppressed realized that there is nothing more honorable than dying in the battlefield fighting for the country’s liberty. The world realized that being conquered by another country is worse than death.

Conclusion Winston Churchill is indeed the best choice for the Man of the Century. His powerful words and strong leadership caused a tsunami in our history. His impact was felt not only within Britain but also throughout the world. He was not only a prolific writer, brilliant public speaker, and a good military leader. He was also a man of peace and an advocate of freedom. He single-handedly raised the conscious of his people on the importance of freedom. He taught them that the country’s freedom is worth dying for. He also encouraged true and lasting peace to the leaders of the world. 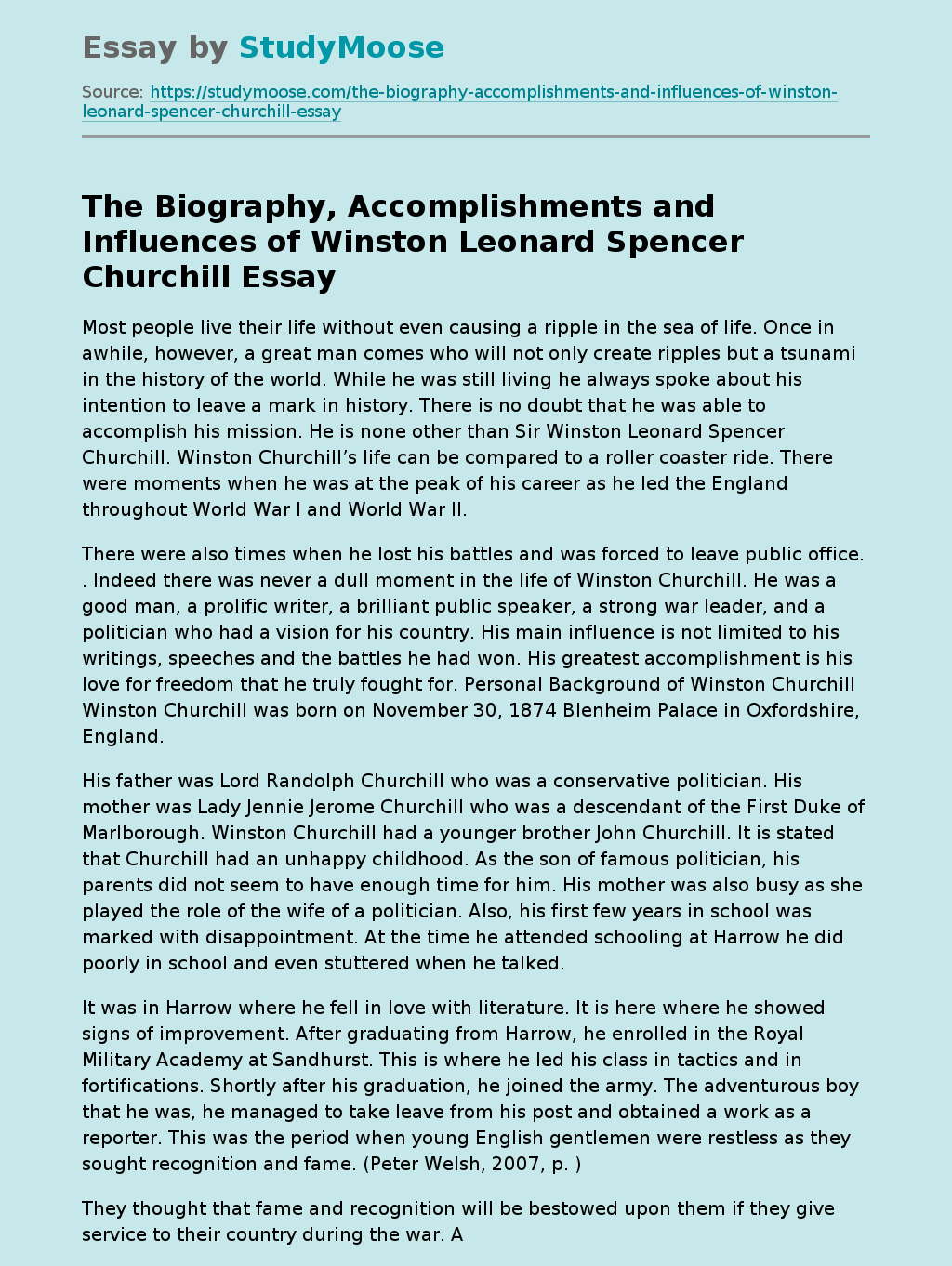