Respond with knowledge and understanding to the crucible by Arthur miller and vinegar tom by caryl Churchill. Looking closely at the drama from a performance perspective and to explore relationships and comparisons between texts and dramatic styles of different periods and cultures to show an awareness of their social context and genre. The plays; “the crucible” and “Vinegar tom” are both about the witch trials in the 16th And 17th century. They both showed the European history of witchcraft, and why it became such a problem and how it was dealt with and how the people of Salem were affected by witchcraft.

Don't use plagiarized sources. Get your custom essay on
“ Vinegar tom by caryl Churchill ”
Get custom paper
NEW! smart matching with writer

In the crucible, the main characters are Jon proctor who is a good man, but has committed adultery with Abigail.

This is the leader of the girls who accuses people of witchcraft during the trial. Elizabeth proctor who is John proctors wife she is an good Woman who is accused of being a witch. She could not forgive her husband for committing adultery until before she died. Proctor’s servant, Mary Warren is one of Abigail’s friends and plants evidence on Elizabeth and is accused of being a witch by Abigail.

I believe these characters are most important as they bring the story together and give the theme and images of love, evil, identity, vengeance and fear.

Proctor and his wife Elizabeth bring forward the idea of love and fear as when Proctor is about to sign his name to confess they have a little heart to heart and bring romance into the play, and they fear that they would loose each other. Proctor and Abigail also bring Fear and romance into the story for Abigail’s love for proctor scares him because he does not love her because he loves his wife more. He fears that his affair with Abigail will be made public.

Fear occurs in all the people in Salem too not only these characters because the hysteria from the girls makes a tense Atmosphere for everyone in the village. Fear of being accused makes people accused others for the slightest thing the theme of vengeance gives the play motivation for the villagers in Salem, it is represented as great power “John proctor: vengeance is walking Salem”. In the play, Proctor plays out the theme of Identity when he goes to sign his name and rips it up, because when he signs his name it would mean that he has confessed to witchcraft, which he has not done.

In addition, by signing his name he would be reining his reputation to being a pure man. Reputation is again linked with naming and identity as Parris (Abigail’s uncle) is worried about whether Abigail’s name is “entirely white”. In this play, the Theme of love, Fear and evil is also conveyed. The theme of love is Jack loves Alice but she does not want him or love him any more. The theme of fear is that the men fear of the increasing power of women, in this play all though out it women are described as “evil women”.

Both “vinegar tom “and “the crucible” are based around the same time and are both about the hysteria that people went through. The crucible and Vinegar tom have a similar scene where in “the crucible” Mary warren is being accused in the courtroom and the bird is supposed to be flying down on to the girls and in “vinegar tom” jack is asking Alice to “Give it him”. Both these scenes are similar in the way that jack is making out that Alice is a witch by saying “give it me” and then Alice says

“There its back” Then Susan says to Alice “What are you doing? ” This scene is similar to in “the crucible” when Abigail and the girls are making out that Mary is a witch by making it look as if she is getting a bird which is supposed 2 be represented at her soul, to come and get the girls. In these two scenes Alice and Mary warren are similar characters as they are both being portrayed as witches and Abigail and jack are similar as they re making them look like witches. 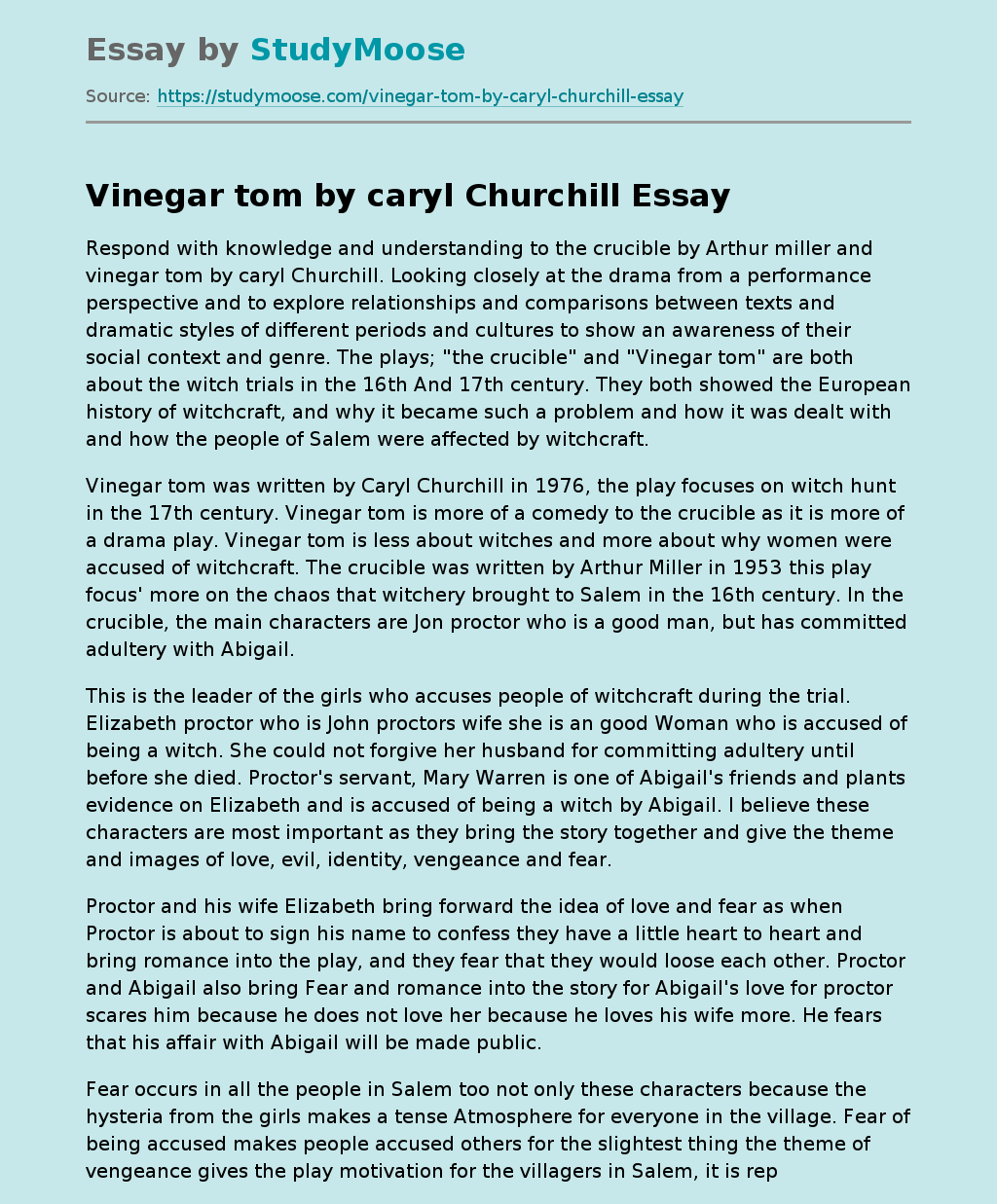