When looking at a work like Uncle Tom’s Cabin by Harriet Beecher Stowe, there are perhaps five main themes that leave a prominent message. Of the themes, gender is the least discussed by literary critics, who choose race and religion first. However, in looking closely at the work itself, gender as a theme resonates powerfully, especially when a consideration is given to why gender is important within the novel, how Stowe’s views affect the characterization within the novel, and how gender is socially constructed within the novel.

+84 relevant experts are online
Hire writer
Don't use plagiarized sources. Get your custom essay on
“ Theme of Gender in Uncle Tom’s Cabin ”
Get custom paper
NEW! smart matching with writer

To begin with, it is well known that Harriet Beecher Stowe wrote Uncle Tom’s Cabin based on her own life experiences while living in Ohio—a slave state. In fact, many of the tragic incidents within the novel came to her from stories told by former slaves. One particular slave’s story touched her above all others, as he refused to betray his owner by running away, and it was he that became the outline for the character of Tom within the novel. In looking at the theme of gender within the novel itself, it can be said that much of Stowe’s own influences as a black woman in a slave state impressed the formation and narrative of the novel.

In fact, Stowe “spoke for motherhood and the flag and apple pie, but she made her readers uncomfortable eating that pie unless others were eating it too” (Hedrick, 1). She was radical in her themes because they were so common to life itself that people felt uncomfortable discussing them—which makes her unique and profound as an author.

Moreover, it is through this insight into Stowe that a reader can grasp the truly profound nature of the narrative that she weaves.

Indeed, Stowe “used the written word as a vehicle for religious, social, and political purposes—often mixing these with entertainment. Had she been a theologian or philosopher—occupations effectively denied her because of her sex—she would have poured her ideas into different molds” (Hedrick, 1). As it was, Stowe’s ideas were so prominent in culture and society that even her ideologies, today, reach a certain sentimentality within readers. While, of course, the work itself is fiction, the elements within are startlingly based on fact and this does much to make the themes even more insightful.

Now, to get into the aesthetics of the theme, it helps to first look at how slaves were viewed within society as a whole. The role of the black slave was socially constructed as one of little or no value as a human, but of having value as property and “although Stowe’s text values the feminine traits it assigns to blacks…it nevertheless represents a complex hierarchy based on essentialized race and gender characteristics in which agency is generally assigned in proportion to whiteness” (Moon, 151).

To be white is to be whole, essentially, and to be black is to be half a person, not worthy of civil rights, let alone the right to vote. However, to be a black slave and a woman added an entirely new dimension to the socially constructed roles of slavery. White women, indeed, were not equal in civil liberties with men until after the social and labor reforms of the 1930’s. So, to be a black woman in the middle to late 1800’s meant even less to the slave owner than can be imagined in the twenty-first century.

If black men were considered property to the slave owner, than women were even less valuable, except for the fact that they provided a stream-lined breeding of new slaves into the family. In Stowe’s work, the idea of “sentiment and idealizations of love, [within] the special realm of right-minded women and domesticated blacks, are linked in unsettling ways to the social realities of property and possession” (Moon, 122). Indeed, Stowe intended to highlight the brutal and cruel nature of slavery in the hopes that history would not be repeated, but could learn from the mistakes of the past.

Essentially, Stowe sought to characterize powerful black women in a way never seen before—before they were little more than property, not worth considering, but, Stowe was determined to use the stories of her childhood in a way that could change the civil liberties of both black men and women. To Stowe, slaves had the same rights as all people, and Uncle Tom’s Cabin makes note of the harrowing evils that slave owners put humanity—as indeed black men and women are humans—through.

Within Uncle Tom’s Cabin, Stowe idealized the stereotype of the black man and woman slave to form a socially constructed role that would highlight her greater themes. In her work, women slaves are powerful women who a reader can connect with and feel true compassion for. For example, the character of Rachel Halliday, who is described as having both an ‘ample, motherly form’ and an ‘ample wing,’ is above all a figure representing abundance and generosity” (Noble, 66). The insight granted with this character is meant to show that a woman is a woman, despite her coloring.

Stowe was one of the first writers in history to highlight women in this fashion. Indeed, what makes this work unique is that the black women have as much an emotional connection to the reader as do the black men. Even more, the reader is drawn with a distinct urgency to the black women, knowing that they are more than property, knowing that they have emotions, passions, and character of their own. What Stowe does is to highlight humanity in a whole new light. She does much, even, for the power of the feminine character.

For gender itself, Stowe breaks from the norm of other writers of her time and gives a meaning and purpose never seen before to the black women. In this, one can see that the true theme of her work isn’t slavery itself, and it isn’t merely the politics of race and slavery—it is that of humanity, that the woman figure is just as important as the man, despite race or position within society. Of the character Rachel, “Stowe writes that she ‘never looked so truly and benignly happy as at the head of her table.

There was so much motherliness and fullheartedness even in the way she passed a plate of cakes or poured a cup of coffee, that it seemed to put a spirit into the food and drink she offered. ’ This famous chapter equates maternal plenitude with home and heaven” (Noble, 66). What Stowe is doing, here, is to highlight even further the nature of the female character and her role within society itself. The maternal figure has been a powerful archetype throughout literature, since the time of Christ, and does much to serve Stowe in this sense as well.

The spirit through which the female character lives her life is one that should be cherished as to its meaning. Despite the fact that she is a slave, and despite the fact that she is a black woman—little more than property, of less value than any of the male slaves, the character is able to make a life, to offer her hearth and home with open arms, as if she had a plentitude to give. Her offering is one of generosity—and mostly, it can be said that those with less have less to offer. But, in Rachel’s case, the less she had, the more she had to offer, as she was thankful for everything, and, even, thankful that she had anything to offer.

What Stowe does, here, is to offer a different view of humanity, not just of gender. To show thankfulness, despite the poverty, is a trait to be admired and one which, unfortunately, society as a whole does not possess. Indeed, the work “highlights female characters who both embody and challenge the status quo, yet widespread cultural change required both genders to stretch their identities and counter ‘the separate realms and responsibilities’ of middle-class gender roles” (O’Brien). In this way, Stowe is able to represent the female form in a way not entirely seen in cultural literature before.

The black women within her work are strong, essentially stronger than any white woman within the work, and engender a different ideal than ever considered before, especially in slave literature. What Stowe does is break the norm of the hierarchy of traditional black roles, and “this hierarchy operated through the assertion of stereotypical images of both men and women of African descent… all of which were represented as natural and for the most part unchanging; only white men were constructed as capable of continual improvement” (Moon, 151).

But, Stowe shows that all men and women are capable of change and growth—not despite their color, but because of it. Indeed, it can even be said that black men and women were capable of more change, as a human, than white men and women, who were trapped in the socially constructed norms of white culture. However, what Stowe does is introduce a new theme of racial identity—despite gender—and that is a problem for some critics. Moreover, “the problem of racial identity—in fact any problem of the body, such as sexual defilement—is effaced. White women and girls are also subject to this sacrificial logic in antislavery fiction.

Little Eva’s death anticipates the martyrdom of Tom. The unexplained wasting away of her body is presented to us as the inevitable, almost natural result of her pure spirituality” (Moon, 199-200). The whites in her work suffer as much, spiritually as the blacks, but they do not have the same capacity for growth—which represents a problem to some critics who view the nature of the white man and woman as one of change and development. However, for a reader of Stowe, this simply makes her work that much more profound when looking at how race influences even the gender roles within the novel.

Overall, When looking at a work like Uncle Tom’s Cabin by Harriet Beecher Stowe, one can say that of the themes within her work, that gender is the most profound. The theme of socially constructed gender roles resonates powerfully with any reader, especially when a consideration is given to why gender is important within the novel, how Stowe’s views affect the characterization within the novel, and how gender is not only socially constructed within society, but within the work as well. 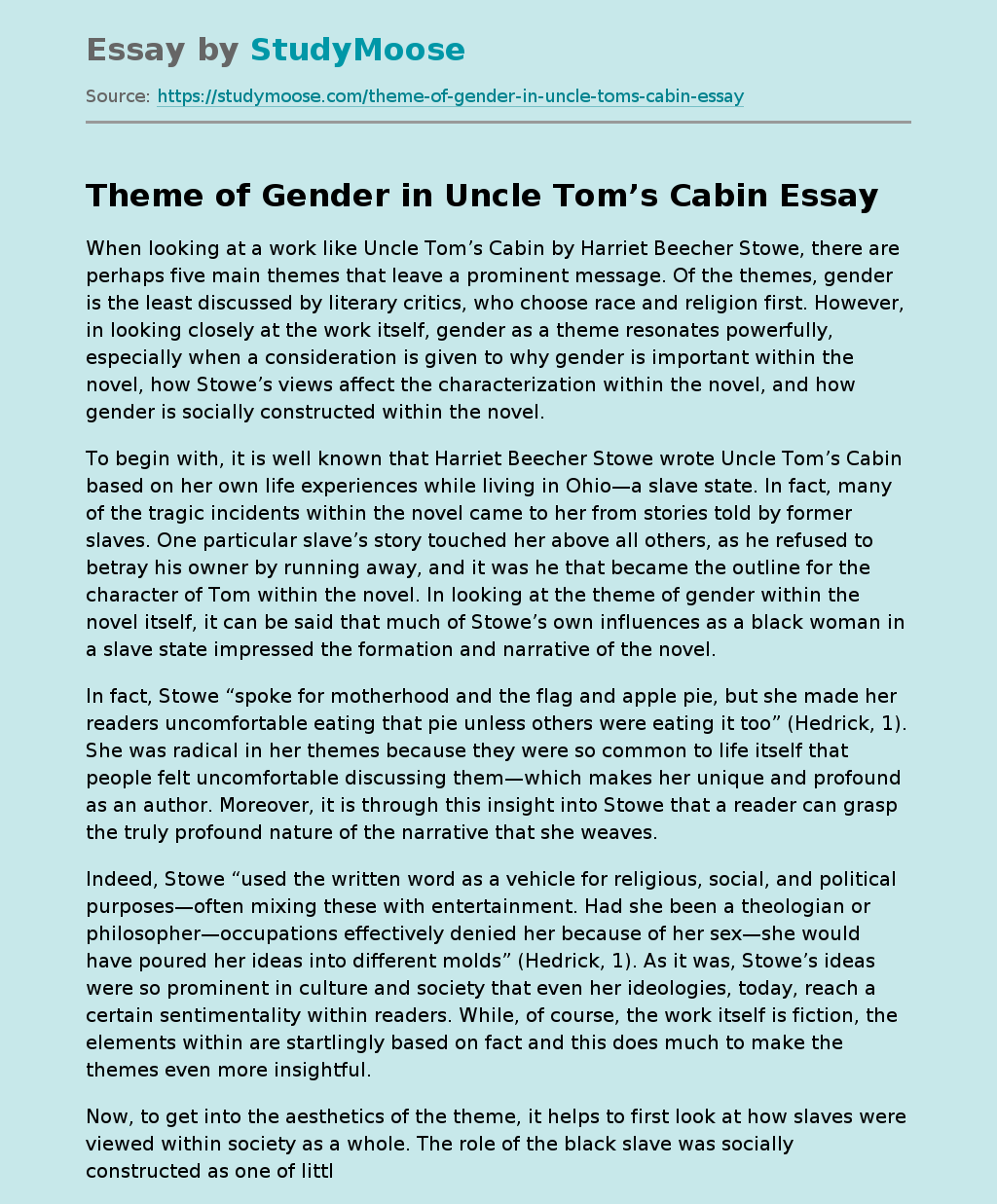