Tompkins goes on to say that critics do not recognize the significance of Uncle Tom’s Cabin because she uses her language and elements of sentimentality to persuade her female audience, through this her novel can ‘reorganize culture from the woman’s point of view’ (Tompkins 124). Stowe has been able to bring about a cultural development through her work, leaving it as one of the greatest works of art that produce pure feelings through her visual images throughout Uncle Tom’s Cabin.

Don't use plagiarized sources. Get your custom essay on
“ Realism in Uncle Tom’s Cabin ”
Get custom paper
NEW! smart matching with writer

This novel is put back and ignored by many only because she uses a feminine language to create emotions and reactions within the story. Not only did Stowe create a political effect, but she maintained a religious theme throughout to provide the power to have her audience to stand up and protest the evils of slavery.

It is necessary to acknowledge that Uncle Tom’s Cabin was not only engaging but active politically, not just due to the emotions, but because of the role that it played during the nineteenth century.

Stowe uses the female power in the novel and ties in religion in Uncle Tom’s Cabin; this is what makes her book so perseverant through the decades after writing it, well beyond the abolition of slavery. There are many examples in the novel that show how Stowe brought the complexity, ambition, and resourcefulness to create realness of American society during her time. Eliza’s interaction with Senator Bird is one example that hits all three characterizations above, Eliza explains to the Birds that she has lost two sons, forcing the Senator to understand slavery through his memories of losing his son than logical reason.

In The Ecstasies of Sentimental Wounding in Uncle Tom’s Cabin by Marianne Noble, she explains that through Stowe uses emotional wounds to reform Senator Bird by “appealing to the universal anguish of separation” to start his political reformation on the Fugitive Slave Act (3).

Women such as Shelby’s wife, Mr. Legree’s mother, and Mrs. Bird all play a moral upholding with the men in the novel, showing they have a stronger faith than the men we encounter. Stowe uses the principle of Christians to show immorality of slavery to those who read her novel. Mrs. Bird places her religion above the law, specifically the Fugitive Slave Law. When she tells her husband John, “I don’t know anything about politics, but I can read my Bible; and there I see that I must feed the hungry, clothe the naked, and comfort the desolate; and that Bible I mean to follow” (Stowe 70).

Stowe uses the power of religion to help move audiences, using the death of Eva and Tom to create sacrifices. Eva’s life and death, to Tompkins, is the epitome of Victorian Sentimentalism. During the 19th century, literature used death as a significant theme, and death has the power to change to the world, whether through a fictional novel or in real life. Her death hurts all characters in the book and brings the slaves and the family together in grief (Stowe 260). The power of this, Tompkins asserts, is that it shows the audience how ‘By giving Topsy her love, Eva initiates a process of redemption whose power, transmitted from heart to heart, can change the entire world’ (131).

After Eva’s death, Ophelia shows Topsy the impact Eva has brought on her after her death, telling Topsy, “I can love you, though I am not like that dear little child. I hope I’ve learnt something of the love of Christ from her. I can love you; I do, and I’ll try to help you to grow up a good Christian girl (259).’ Every person who came in touch with Eva learned to love, learned the word and love of Christ, for Eva saw no faults in anyone, never focused on the color of their skin. She undeniably loved as Jesus would have, she is a pure, spiritual soul giving off vibes of what a Christian person should be. The religious revival of Topsy’s soul is through Eva and her love for everyone that encounters her.

Slaves use religion to help them find strength despite the horrible suffering they went through. We can see this play out with Uncle Tom, despite the evilness of Legree, he manages to maintain his Christianity, not as he did with the Shelby’s or St. Clares, but none the less he holds on to it. Sharon Cumberland article “An overview of Uncle Tom’s Cabin” slightly explains that Uncle Tom is modeled on Jesus Christ and he is designed to demonstrate how evil can be transformed into good by love (2018). This idea makes sense with Stowe coming from a line of preachers; she is using her novel to preach the evilness of slavery through realistic examples of people not only in the south but the north too.

Typology is vital as a literary device; biblical characters become the reflection of the deaths of Eva and Uncle Tom. Forming a connection between the fictional world of Uncle Tom’s Cabin and the realism of the events in Stowe’s time helps create the typological argument against slavery. Stowe creates realist events within the novel, moving the readers to identify the troubles of the characters with their Christian ideals and values.

John Harvard explains in Fighting Slavery by Presenting Facts in Detail, “the reader’s world… a space that action can change… Stowe presents her typological critique as a call for the reader to take the action that St. Clare and Ophelia only begin to take” (259). Coming back to the conversation of Senator Bird and his wife, the Senator is using political actions to justify the Fugitive Slave Act including that they must put their private feelings aside in the state of public agitation (Stowe 70). Mrs. Bird is using the Bible to go against her husband’s beliefs on the matter, such as many would during the time. Tompkins quote that “stories like the death of little Eva are compelling… they enact a philosophy, as much political as religious” are features of a typological narrative. Stowe uses not only realism, but biblical examples to move her audience towards change providing a cultural, geological, and personal connection within the readers.

Stowe uses the novel to enact and make improvements in society through the abolition of slavery. The religious views of Stowe are brought on to readers that they were simple, childlike, and pure. Both the north and south used the Bible to either excuse or defend their practices, and this action’s brought to light within Uncle Tom’s Cabin. The novel moved its audience with a passionate response from the readers, through heart-rendering events. Many emotional actions take place in Uncle Tom’s Cabin through the death of Eva, the murder of Tom, the redemption of Sambo, Eliza, and George. Jane Tompkins boosted the sentimental value of Stowe’s novel, writing that she showed how the women’s emotions had the power to change the world, and the character’s tribulations identified with Christian values. Through Harriet Beecher Stowe’s complexity, ambition, and resourcefulness she indeed delivered better than authors in her time by creating realism within Uncle Tom’s Cabin that has made her novel last over a hundred years and possibly persevere through more. 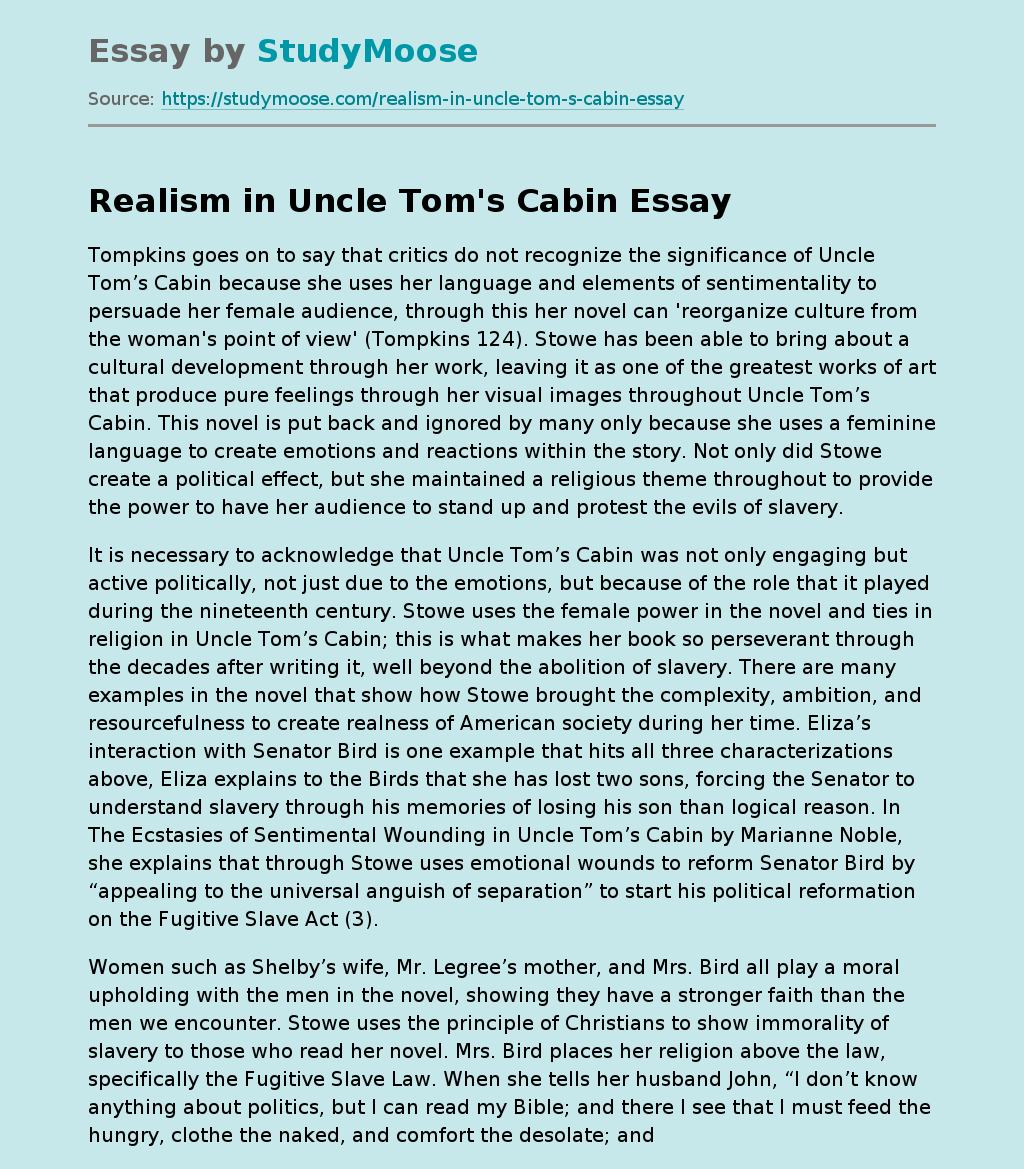