Use of magic realism within Tim Winton's "Cloudstreet"

Tim Winton’s Cloudstreet is a novel that fits into many genres, including that of family saga, gothic and magic realism. Although we can see evidence of all these in the text, it is the conventions of magic realism which work well in the creation of meaning and the formation of parallels between the society depicted within the novel, and a contemporary Australian. Some key elements of magic realist novels are that they include the use of fantastical elements, extensive use of symbols and imagery to drive the narrative and the distortion of time.

Turn in your highest-quality paper
Get a qualified writer to help you with
“ Use of magic realism within Tim Winton’s “Cloudstreet” ”
Get high-quality paper
NEW! AI matching with writer

We can see examples of these elements within Cloudstreet, which all function to add to meaning both within the novel and in a modern context by embedding issues of concern, such as the need for reconciliation and the importance of family, which are relevant to an audience of many generations.

Fantastical elements are a part of magic realism, and in Cloudstreet they can be found in the form of the Aboriginal mystic, the Pentecostal pig and the spirits in the house.

The spirits are particularly important in their contribution to the creation of meaning within the novel, as they are symbolic of white Australian treatment of Aborigines. One of these spirits is the ghost of a young Aboriginal girl, who was taken in by the house’s previous owner, an elderly woman, in order to “make ladies of them so they could set a standard for the rest of their sorry race.” This section of the text is clearly representative of the feeling of superiority many white Australians had towards the Aboriginal people of the 1940’s, which is sadly still true to some extent today.

They crawled from windows but were tracked down and returned to the house.” One of the young girls eventually takes rat poison in order to escape the constraints of her situation, and she resides as a spirit in the house, only seen to certain family members, such as Fish. This part of the narrative is representing the attempts made at reconciliation at the time, and the shallowly concealed contempt many white Australians held for their indigenous neighbours. We can see this in a scene with Fish in the library in which the ghosts of the young girl and the old lady are fighting “The two women bare their teeth at each other, dark and light, light and dark, hating, hurting.” Fish rejects these spirits, “I hate youse stupids! This is my house!” which is again representative of many white Australian attitudes towards Aborigines in terms of land rights and possession.

Tim Winton presents an informed view concerning Aboriginal dispossession, “For the Aborigines this land isn’t just your home, it is your sacred place. To be separated from the land is to be put in limbo, to be stuck between life and death,” which is then presented to us within Cloudstreet, through his use of the conventions of magic realism. The use of fantastical elements in the form of spirits is a prime example of how a magic realist novel, such as Cloudstreet, can hold clear parallels to issues of concern within a contemporary Australian society.

Cloudstreet has a narrative rich in sensory detail, one that is driven by the extensive use of symbols and imagery. In Cloudstreet, this is including, but not limited to, water, which is representing both life and death, and the Aboriginal mystic who is representative of the Aboriginal connection with the land. However, the most meaningful would be the house itself, representing not only a community, but also a divided nation, which eventually becomes whole, presenting an idealistic view of the future. The house in Cloudstreet plays an important part in the narrative as it emphasizes the importance of family in a chaotic world, and the problems that arise when this is ignored. We are at first presented with two separate families, suffering from their own tragedies. Throughout the novel we see tension and disagreements, not only in the form of interfamily conflict, but also conflict between the two families as a whole, such as between Oriel Lamb and Dolly Pickles.

These women are such binary opposites of each other that they do not understand each other at all. Dolly resents that Oriel is the good mother she never was, which results in tension, until Dolly falls down the stairs late in the novel and Oriel is the one to nurse her back to health. It wasn’t until this accident that they realize they had been a constant in each others life for twenty years, and their reconciliation, aided by the marriage of Rose and Quick, was complete. Other characters undergo similar rites of passage towards reconciliation and realizing the importance of family, such as Lester; “Take away the family and that’s it, there’s no point…If I did nothing else in me weak old life, I know I had a family, and I enjoyed every bit of it,” and when these reconciliations and acceptances of each others differences is complete, the division between the two families is gone, “It’s a bloody tribe, a new tribe” (Rose).

This presents an idealistic view of the future in that it suggests that we can overcome our differences to live harmoniously within our communities. We can again see how Winton, who believes that we should “Learn to belong, don’t break community,” has brought his own beliefs out through the conventions of the text. The house is an important metaphor within Cloudstreet as it strongly enforces both the necessity of family, and the need for reconciliation, and these are some of the interwoven strands that make up the fundamental base of the novel, as well as fitting the criteria of magic realism in that its imagery and symbols are what drives the narrative.

Structure also plays an important role within a magic realist novel, as it works to reflect a deeper meaning. In the case of Cloudstreet, the structure is cyclical; we begin and end at a family picnic by the river, which is showing just how far the two families have come over the past years. We realize that the whole story has been told as a flashback in Fish’s final moments, him being a multi voiced, multi layered narrator. Although Fish has not progressed physically since his revival from drowning, the final chapter confirms that he has been existing spiritually on an ethereal plane. We can see that his time on earth has not been wasted as he has seen the two families coming together, with differences resolved and able to communicate with each other once more, such as Dolly and Rose; “Rose was glad of these talks with her mother.

She found soft parts still left in herself, soft parts in Dolly as well, and in a way she figured it saved her from herself. It was love really, finding some love left. It was like a tonic.” The birth of Wax Harry in the library cleansed the room of its spirits, symbolizing the new driving out the old; ” The room sighs, the house breathes its first painless breath in half a century.” The way Cloudstreet has been structured has worked extremely well in both its contribution to meaning within the narrative, and its enforcement of ideas and concerns, such as family and reconciliation, that parallel our society. The arc has brought us back to the beginning, with all differences resolved, which is symbolic of the reconciliation between white Australians and Aborigines being complete. However this still remains to be true, even in the 15 years since it was written, which shows how a magic realist novel can be just that, although there may be many areas of relevance within modern Australian society, there are also certain aspects which are still wishful thinking and hope for the future.

If it were not for the skilful mixture of reality and the unexplainable, Cloudstreet would no longer be a magic realist novel. The way Winton has imposed magical elements into an ordinary suburban world, where they are accepted, demonstrates his belief that we are becoming so caught up in materialism and the growth of technology that we no longer celebrate the ordinary and have become too skeptical to consider events out of the mainstream. We can see his beliefs through the conventions of magic realism that exist within Cloudstreet, and these extraordinary ideas, such as the fragmentation of Fish and the Aboriginal spirit, encourage us to reflect upon what we really value, such as family and the need for reconciliation in order to resolve the pain of the past.

Use of magic realism within Tim Winton's "Cloudstreet". (2016, Jul 06). Retrieved from https://studymoose.com/use-of-magic-realism-within-tim-wintons-cloudstreet-essay 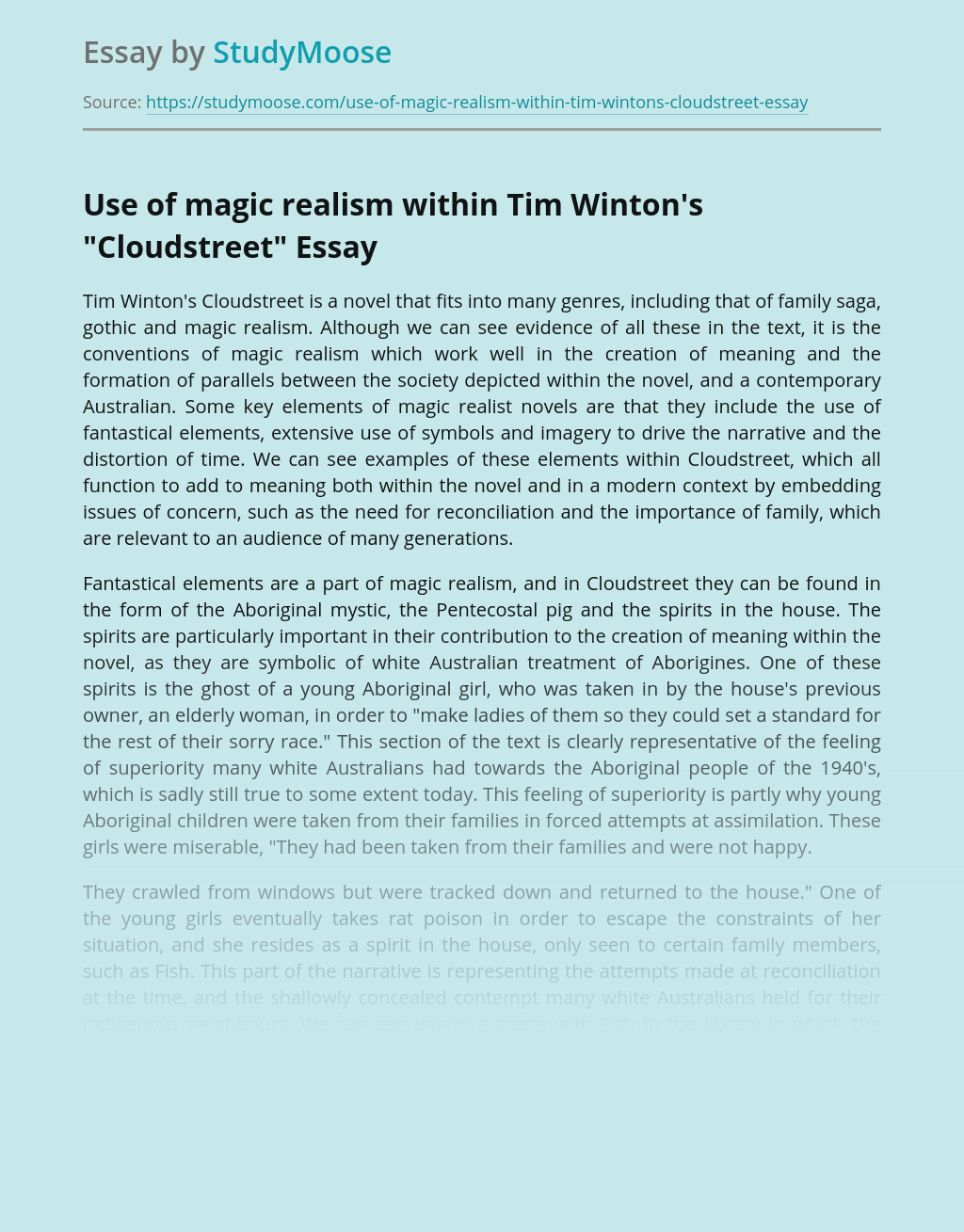 Turn in your highest-quality paper
Get a qualified writer to help you with
“ Use of magic realism within Tim Winton’s “Cloudstreet” ”
Get high-quality paper
Helping students since 2015
Stay Safe, Stay Original