“We Shall Fight on the Beaches” is one of the most motivational and inspirational speeches during World War II. The oration begins with Churchill describing on how the war is proceeding and their position in it. Based on the details of the situation, it sounds very grim for them. Churchill, using this to his advantage, creates a higher moral and encourages people that they will win the fight and they will not give up. Churchill accomplishes this using all forms of rhetorical devices such as Pathos, Logos, Ethos, anaphora etc.

Don't use plagiarized sources. Get your custom essay on
“ Winston Churchill: An Inspiration ”
Get custom paper
NEW! smart matching with writer

Instead of merely mentioning that he has a plan of action, he describes in detail what is going to happen so that they can achieve victory. His intention was to give the audience hope and something to look forward to, a brighter future. Winston Churchill, not only an inspirational leader, but an extremely important figure during WWII, has given a speech that may have very well encouraged enough people to take action that they had changed the tide of war.

This speech is very well deserving of making the list due to its copious amount of rhetoric devices and the quantity of emotion that has been expressed throughout the speech.

In his earlier years, Churchill frequently had to deal with the absence of his parents due to their busy social lives; the only company that he possessed during that time was of his nanny and his younger brother Jack. At twelve years of age, he had the earning to study military tactics at the prestigious Harrow school.

From there he had been accepted into Sandhurst and later graduated from that nearly at the top of his class and was given a commission as a cavalry officer. Churchill was given his first leave, but instead of taking a break and relaxing, he decides to take a trip to Cuba to observe Spanish troops down a rebellion. He had used his experiences of war to write 3 books, one of which describes how he was captured and taken as a prisoner of war. At the age of 25, Winston Churchill began his political career after returning home. With hard work and dedication to his goal, in 1911 he became First Lord of the Admiralty, meaning that he was put in charge of the British navy. All these choices and experiences had shaped him to become a great leader, war hero, politician, and writer. All his actions had given him great recognition and became a very significant figure for the British.

Throughout his speech, he uses a variety of words and phrases that appeal to emotion, otherwise known as pathos. Winston Churchill says “always so ready to be led to the trampling down in other lands of liberties and comforts which they have never known in their own.”(Churchill) this phrase stimulates your emotions and he is saying that the Germans are always ready to take down other countries freedom and their possessions. He says this to create anger in the audience to make it known that the Germans are our enemy and they are despicable people and will do many dreadful situations. He wants to create an image that will stick in the heads of the audience. Churchill also uses this phrase as a way to get everybody on the same page as he; he wants the audience to all think one thing: we need to stop them. This was a great strategy that Churchill uses and now that he has said that, he has gotten their attention. “Only 30 unwounded survivors were brought off by the Navy, and we do not know the fate of their comrades. Their sacrifice, however, was not in vain.” (Churchill) He says this to create a sad mood.

He uses logos to give the audience an idea of what they are up against. “The Rifle Brigade, the 60th Rifles, and the Queen Victoria’s Rifles, with a battalion of British tanks and 1,000 Frenchmen, in all about four thousand strong, defended Calais to the last.” (Churchill) Churchill uses logos to give the audience an image of what they have to protect themselves from the Nazis. Churchill also uses ethos to give the audience a reliable source that has hope that they will win the war. “I have, myself, full confidence that if all do their duty, if nothing is neglected, and if the best arrangements are made, as they are being made, we shall prove ourselves once again able to defend our Island home, to ride out the storm of war, and to outlive the menace of tyranny, if necessary for years, if necessary alone.” (Churchill) He uses himself as a credible source since he has built up a very sturdy reputation. The audience knows him and trusts him to make a robust decision.

One man’s bloodthirsty passion for power can bring out the best in our leaders. It shows what one man can do by just speaking out, and how with enough encouragement, great things can happen. Churchill has proven himself and has done great work, and he has also made a very effective speech; this is a speech that is truly worth being put on the list. 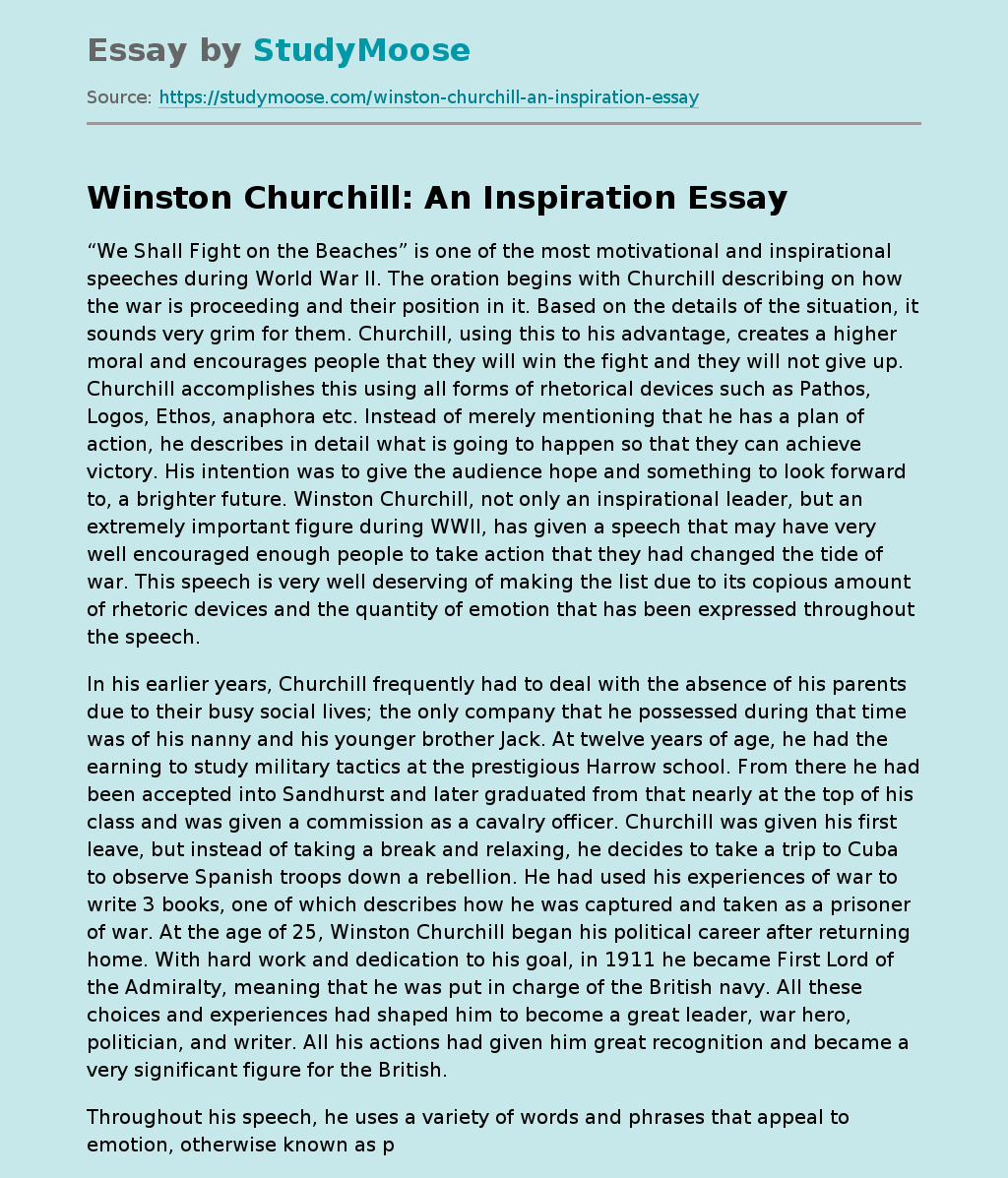