Character sketches of Winston Smith and Julia in “1984”.

The two main characters in 1984 are Winston Smith and Julia. Winston has his beliefs. It is very hard to make him believe in someone else’s ideas or lies. He is a little paranoid about people watching him. In the story 1984, people can be watched through TVs (telescreens). Because of this paranoia, he found a place in his apartment were he could sit without being seen. He spends much of his time sitting in this corner writing in his diary.

Don't use plagiarized sources. Get your custom essay on
“ “1984” Winston Smith and Julia Report ”
Get custom paper
NEW! smart matching with writer

In his diary, he writes things that could easily have him killed. Winston is a quiet person who has a few friends. He has a strong feeling about how the world is and a stronger feeling about how it should be. Here is my example from the book that shows Winston’s character: “Just now I held up the fingers of my hand to you. You saw five fingers. Do you remember that?” “Yes.

” O’Brien held up the fingers of his left hand, with the thumb concealed. “There are five fingers there. Do you see five fingers?” “Yes.” And he did see them, for a fleeting instant, before the scenery of his mind changed. He saw five fingers, and there was no deformity. Then everything was normal again, and the old fear, the hatred and the bewilderment came crowding back again. But there had been a moment – he did not know how long, thirty seconds, perhaps – of luminous certainty, when each new suggestion of O’Brien’s had filled up a patch of emptiness and had become absolute truth, and when two and two could have been three as easily as five, if that were what was needed.

It had faded out before O’Brien had dropped his hand; but though he could not recapture it, he could remember it, as one remembers a vivid experience at some remote period of one’s life when one was in effect a different person. Earlier in that section O’Brien had tortured him into believing two plus two equals five. Julia’s feelings are not nearly as strong as Winston’s. She is somewhat sneaky, and she is very good at eluding The Thought Police. Julia is quiet, and she likes to think of the future and the past rather than the present. She enjoys small things that are old and simple. Julia is somewhat interested in the way the world is turning. She enjoys nature and animals. Here is my example from the book that shows Julia’s character: She fell to her knees, threw open the bag and tumbled out some spanners and a screwdriver that filled the top part of it. Underneath was number of neat paper packets. The first packet that she passed to Winston had a strange and yet familiar feelings. It was filled with some kind of heavy, sand-like stuff which yielded wherever you touched it. “It isn’t sugar?” he said. “Real sugar. Not saccharine, sugar. And here’s a loaf of bread – proper white bread, not our bloody stuff – and a little pot of jam. And here’s a tin of milk – but look! This is the one I’m really proud of. I had to wrap a bit of sacking round it, because ” But she did not have to tell him why she had wrapped it up. The smell was already filling the room, a rich hot smell which seemed like an emanation from his early childhood, but which one did occasionally meet with even now, blowing down a passage-way before a door slammed, or diffusing itself mysteriously in a crowded street, sniffed for an instant and then lost again. “It’s coffee,” she murmured, “real coffee.” Julia had more interesting things in her bag after the coffee, this example shows her interest in old and simple things. If Winston had a flat tire, he would probably sit in his car for a while. After maybe one half hour, he would get out of the car and deal with it. When he was dealing with it, he would not think about the work very much. Winston would definitely write a lot about it in his diary. In 1984, all the dish washing is done by the cooks. If Winston had to do the dishes, he would probably not be very good at it. He would take a long time. He probably would not break very many dishes. If he had the option to use a dishwasher, he would definitely do it. Winston would probably have a few dishes that he liked using and would use only them. Before he met Julia, he would eat without much appetite and was skinny. If Winston were faced with a bully, he would react with anger. After his first reaction, he would look the person over. If he thought the person were stronger, he would become afraid and sulky. Winston would begin to tell the person that he was right, in hope of escaping pain. Winston does not like trouble; but if he has to deal with it, he does it with force. If Winston had to go grocery shopping, he would be as quick as possible. He would probably not do the best possible job, and he would probably forget things. Winston would not use any coupons or go to certain stores because they were cheaper. He would not enjoy shopping. Winston would try to get other people to do the shopping for him. 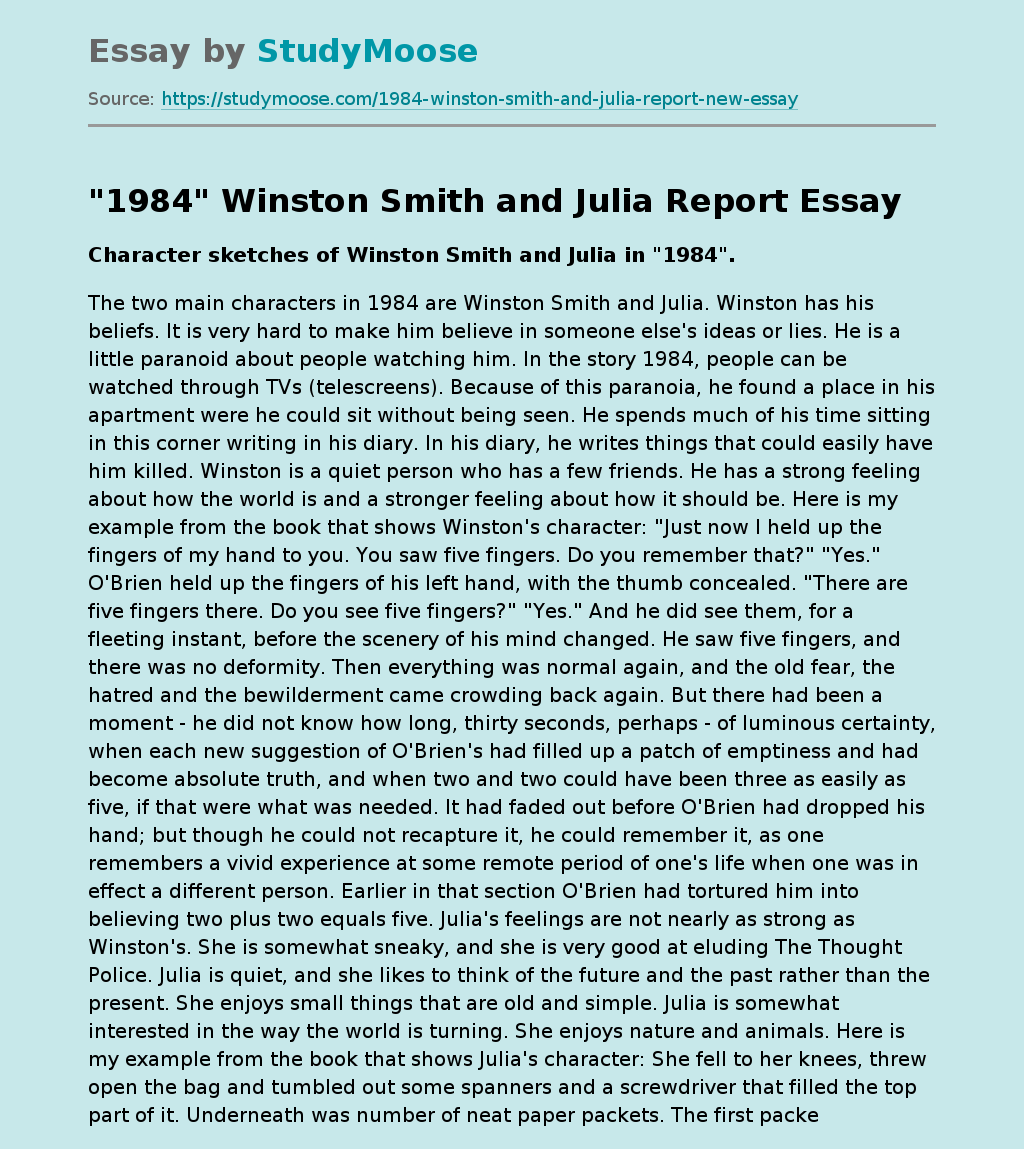