Winston's transformation from "1984" by George Orwell

George Orwell’s novel 1984 demonstrates how a person can be completely changed. Winston Smith the protagonist in 1984 was completely changed by the end of the novel. The government transformed Winston’s beliefs from despising to loving Big Brother. By the end of the novel Winston was fully transformed, his way of thinking was altered and he was brainwashed into loving Big Brother for the rest of his existence.

Winston has been tortured, in the Ministry of Love by O’Brien for days, maybe weeks or months, we never know.

Don't use plagiarized sources. Get your custom essay on
“ Winston’s transformation from “1984” by George Orwell ”
Get custom paper
NEW! smart matching with writer

As the torture takes place he never becomes fully transformed until he loses the ability to love. At a certain stage during his torture Julia was the only thing he still loved. She was the only person that stood in the way of Winston loving Big Brother. He mentioned earlier in the novel that his love for her could never be broken, they would never be able to separate and he wouldn’t be able to live with out ever seeing Julia again.

O’Brien asks Winston and Julia, “You are prepared, the two of you, to separate and never see one another again? No broke in Julia. It appeared to Winston that a long time passed before he answered. … No he said finally” (Orwell 142-3).

The reason that love kept him from being fully transformed to what the government wanted him to be is that he is not suppose to feel love for anyone but Big Brother and the party. Julia is the only person he loves and until he betrays Julia and feels no love for her, he has not been fully altered into what O’Brien and the government want him to be.

The Ministry of Love made Winston hate himself first by degrading him, making him appear like he was dying and then forcing him look at his own worn out decrepit reflection in the mirror. Winston began to hate himself. The hate for himself caused him to become uncertain of his own beliefs of Big Brother and the government and also doubtful of his love for Julia.

The mask was closing on his face… he had suddenly understood that in the whole world there was just one person to whom he could transfer his punishment – one body that he could thrust between himself and the rats. (Orwell 236)

After betraying Julia, Winston’s torture ended. He saved himself from the rats by showing that he no longer loved Julia. His love was then gone. Winston’s transformation into subordinate party member was now complete.

The first scene of Winston out in the real world after his transformation as a loyal subject of Big Brother was of himself actively listening to the telescreen for news on the war with Urasia. Winston could not keep his mind on any one subject anymore, “In these days he could never fix his mind on any one subject for more than a few moments at a time” (Orwell 237). That is probably something that the government actually wants, the inability to stay focused on any one subject. They do this so the people never doubt Big Brother’s power and authority and they don’t think about certain issues such as the validity of Big Brother, somewhat like a child. He has some memory of what happened to him in room 101. His memory of room 101 was evident when he said, the smell of the gin which stayed with him smelled like rats, without saying the word “rats” which was an obvious effect of the unspeakable and lasting trauma of his experience of room 101. He remembers his mother buying him Snakes and Ladders, but moves it aside in his mind as a false memory, an apparent outcome of the transformation.

Winston starts thinking about a defeat in Africa and that it may end the party. He becomes filled with different feelings about it, and then he says, “the spasm has passed” (Orwell 239), which indicates that it was a corrupt thought. Before he was brainwashed by O’Brien that would have been a pleasant thought since, the destruction of the party was his objective. Winston also almost unconsciously traces “2 + 2 = 5” (Orwell 239) on a table. This was another indication that Winston’s mind had been altered to what the government wants. He actually believed that the sum of two and two was five. It was his own belief, unlike when he was forced to believe that two plus two equals five during the transformation process. Winston’s encounter with Julia was another indication that he has lost the ability to love again.

He remembers meeting Julia on a cold March day. He says they almost didn’t meet. Winston was actually about to pass Julia in the same way as he would pass any other person on the street, when she was not too long ago the love of his life. He actually did meet her and put his hand around her waist, but he felt no love in the midst of their encounter. He says the thought of doing anything with her frightened him, “They could have lain down on the ground and done that if they had wanted to. His flesh froze with horror at the thought of it” (Orwell 239). That demonstrates how powerful the government is and they can actually control what people think and feel, which is exactly what they did to Winston. He cannot and has no desire of doing anything evil against the government.

Ultimately Winston Smith, the protagonist in George Orwell’s novel 1984, has been transformed. The government destroyed his beliefs and put in new ones. They instated the beliefs they want all their subjects to have into Winston. George Orwell wants all his readers to see that it is possible for a government to control what people do and more importantly, believe by closely monitoring them, keeping them subordinate at all times and when necessary induce torture and brainwashing to enforce those beliefs.

The concept of the government brainwashing people to make them believe what they want the people to believe as in 1984, applies to our world to a certain extent. The United States government is not literally brainwashing and torturing us to get their way, but they do use tactics to influence our ideas with propaganda. In this point in history the U.S. is attacking Afghanistan and possibly other areas, we do not know about. The government wants its citizens to believe that war is the appropriate thing to do at this time. They spread propaganda about how evil Afghanistan is and that we need to attack them to protect ourselves. They want us to be scared about another attack, anthrax, biological weapons etc. so that we let them do what they want and they can say, “we are doing this to protect the American people and that is what they want and need”. The government puts ideas of war in our minds, by repeating it and making it seem necessary, somewhat like O’Brien repeating 2 + 2 = 5.

Winston's transformation from "1984" by George Orwell. (2016, Jun 22). Retrieved from https://studymoose.com/winstons-transformation-from-1984-by-george-orwell-essay 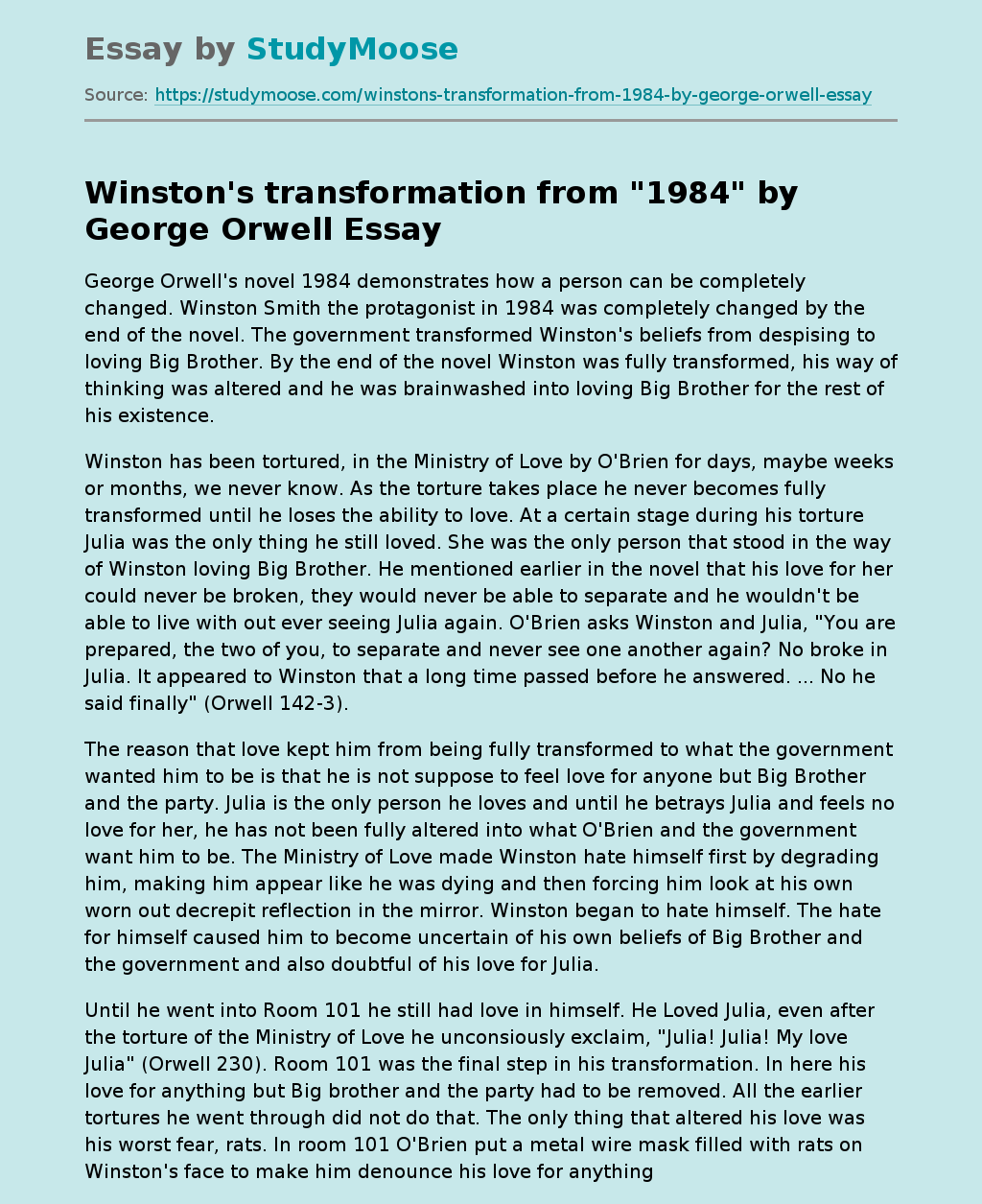