Critical Analysis and Evaluation of "1984" by George Orwell

George Orwell, whose real name was Eric Blair, was born in Bengal, India, in 1903. When he was eight years old, as it was customary, his mother brought him back to England to be educated. He was sent to a boarding school on the south coast, a school whose students were sons of the upper class. He was allowed in with lower tuition and not being from a wealthy background, he was subject to snobbery of the others at the school. In 1917 he went to Eton on a scholarship and he enjoyed himself, making friends and reading many books.

Don't use plagiarized sources. Get your custom essay on
“ Critical Analysis and Evaluation of “1984” by George Orwell ”
Get custom paper
NEW! smart matching with writer

Orwell graduated in 1921 and instead of going on to a university; he joined the Civil Service and went to Burma as a sergeant in the Indian Imperial Police. He served as a policeman in Burma from 1922 until he took leave in 1927 and resigned his post.

Orwell now had time to think and he decided to live among working-class people in Paris and among the tramps in England for more than a year.

During these years he worked as a schoolteacher and got married. Both he and his wife kept a village pub and a village general store. All of these experiences led up to the basis for his first book, Down and Out in Paris and London, which was an autobiographical work he published in 1933. This was his first book and he used the name George Orwell. He explained later that he took the last name from an English river near where he lived and the first name as being typically English.

The latter part of his work was written primarily about different things and places that he had experienced. For example, he wrote, Homage to Catalonia, from his experiences in the Spanish Civil War and A Clergyman’s Daughter, makes use of his teaching experiences. Orwell died at the young age of forty-seven from neglected lung ailments. In his death he left behind a growing reputation for greatness and the conviction that modern man was inadequate to cope with the demands of his history.

It is not apparent that Orwell used any sources in his writing of 1984. If he had, they were not included in my copy of 1984.

I feel that George Orwell wrote 1984 as a warning after years of brooding on the twin menaces of Nazism and Stalinism. He wanted to lay out the basis of what he thought the world could become. By writing this anti-utopian story, I feel he hoped to frighten us so that we might be on our guard. If a certain city knew of a tornado on the rise, they could be prepared. But, if that tornado hit that same town and they were not expecting it, the potential damage could be far greater. Orwell was warning us.

The position the author takes on his story seems to be a hopeful one. He hopes that Winston will end up defeating Oceania’s mad system of government and find true love with Julia but he is not writing a love story. He planted his seed (the plot) in some nasty soil. The environment in which he set his story would only allow for Winston to get so far before Big Brother got the best of him. He clearly felt sympathy for Winston but he also wanted to make his point for the book clear. Wintson would have to love Big Brother.

Winston Smith, a physically insignificant man of thirty-nine, is Orwell’s principal protagonist. He works in the Records department of the Ministry of Truth, revising the past as it appears in the newspapers, and he is tired of living under the paternalistic government of Oceania. Waking up every morning in this mad society has turned him slowly into a rebel. He first started writing in a diary, which was looked at with suspicion by the Though Police. Writing would record history as it really occurred and this was exactly what the Big Brother did not want.

Big Brother is the name of a person that does not exist. He is the major political figure in Oceania that opposes everything Emmanuel Goldstein is about. If one takes the position that “the party is correct,” than Big Brother becomes God, President and ultimate friend. Goldstein, on the other hand, preached that Big Brother was wrong and eventually had to flee from Oceania because of his growing hatred. The videotapes with which he spoke against Oceania’s politics and Big Brother were used in the daily Two-Minute Hates. In this period of time, work ceased and everyone gathered around a telescreen, large, flat television screens that pervaded Oceania. Goldstein appeared on the telescreen and everyone was to scream and mock this man, for he was not right. A young woman, Julia, instigates a liaison between herself and Winston. Rebelling against Big Brother, they make love, which Winston believes is a severe thoughtcrime.

He felt that sexual relationships accompanying love would result in a loyalty between individuals that is contrary to the desires of the Party. They then rent an apartment and take comfort that O’Brien, a vigorous, intelligent man of mysteriously high rank in the Inner Party, is their friend. O’Brien lets Winston read a seditious book. This book describes the relationships of Oceania with Eastasia and Eurasia. Once O’Brien had enough evidence to convict Winston and Julia, the two were arrested in their rented room. They were imprisoned in the Ministry of Love where O’Brien put Winston through the first two stages of his retraining. Over the nine months of “rehabilitation” he learned to love O’Brien and they conversed as if friends. The last stage came in the dreaded Room 101, where Winston was made to face what he secretly feared most, rats. He betrays Julia and is subjugated physically, mentally, and emotionally. All that remains is for Winston to love Big Brother.

Personal Evaluation of Book and Author

George Orwell is an excellent author. Before I was introduced with 1984, I read Animal Farm and this gave me a taste for his writing. In both Animal Farm and 1984 alike, Orwell’s writing was easy to adapt to. His style of writing helped my understanding of the book and made it enjoyable. In 1984, he presented a very interesting scenario similar to Nazi Germany. I believe that Orwell put much effort into this book and made his story very realistic. As I read along, there was nothing which seemed too out of reach or too unbelievable. His protagonist, Winston Smith, was an ordinary citizen in Oceania by appearance but his thoughts and actions were radical according to Big Brother.

Orwell in a sense let me down by letting the worst catch up with Winston and having Big Brother be the final destruction of him. This, though, I feel had to happen to fulfill the authors purpose for writing the story. He wanted to lay out the idea of an anti-utopian society and, I think he hoped by presenting it, that it might not happen. I believe that he fulfilled his purpose in writing the story and that he laid out a warning for the potential dangers of totalitarianism. His book was at first thought to be too radical but the more it was read and reread, he seemed to be right on target. He proposed a very interesting story with endless possibilities.

Reading 1984 was a learning experience. I learned the value in speaking out against the majority. I also learned the danger in allowing groups to gain too much power. When I was reading the book, I forgot some political aspects about W.W.II and I went back to a report I had written on that subject. After reviewing the war, it made me realize how well Orwell set his thoughts out through the book and how he formulated an interesting story. Orwell might not have been the most creative of all authors but I learned that this did not matter. He worked hard on such an elaborate plot that it was not necessary to be that creative. This was a fictional piece of literature and therefore I could not agree or disagree with the knowledge I previously knew about the book’s subject. Though, the book speaks of a society that was remarkably similar to Nazi Germany.

I recommend this book to anyone. It was well written and thoughtful ;I will always remember its impact on me. The best thing about it was that anyone could pick up this book and get the jest of it. It was not imperative to understand what utopia meant or have any knowledge of W.W.II, Nazi Germany, or the Soviet Union or to understand the book. As I had said before, I had to refresh my history of W.W.II but this did not hinder me from enjoying the book.

Critical Analysis and Evaluation of "1984" by George Orwell. (2016, Jun 21). Retrieved from https://studymoose.com/critical-analysis-and-evaluation-of-1984-by-george-orwell-essay 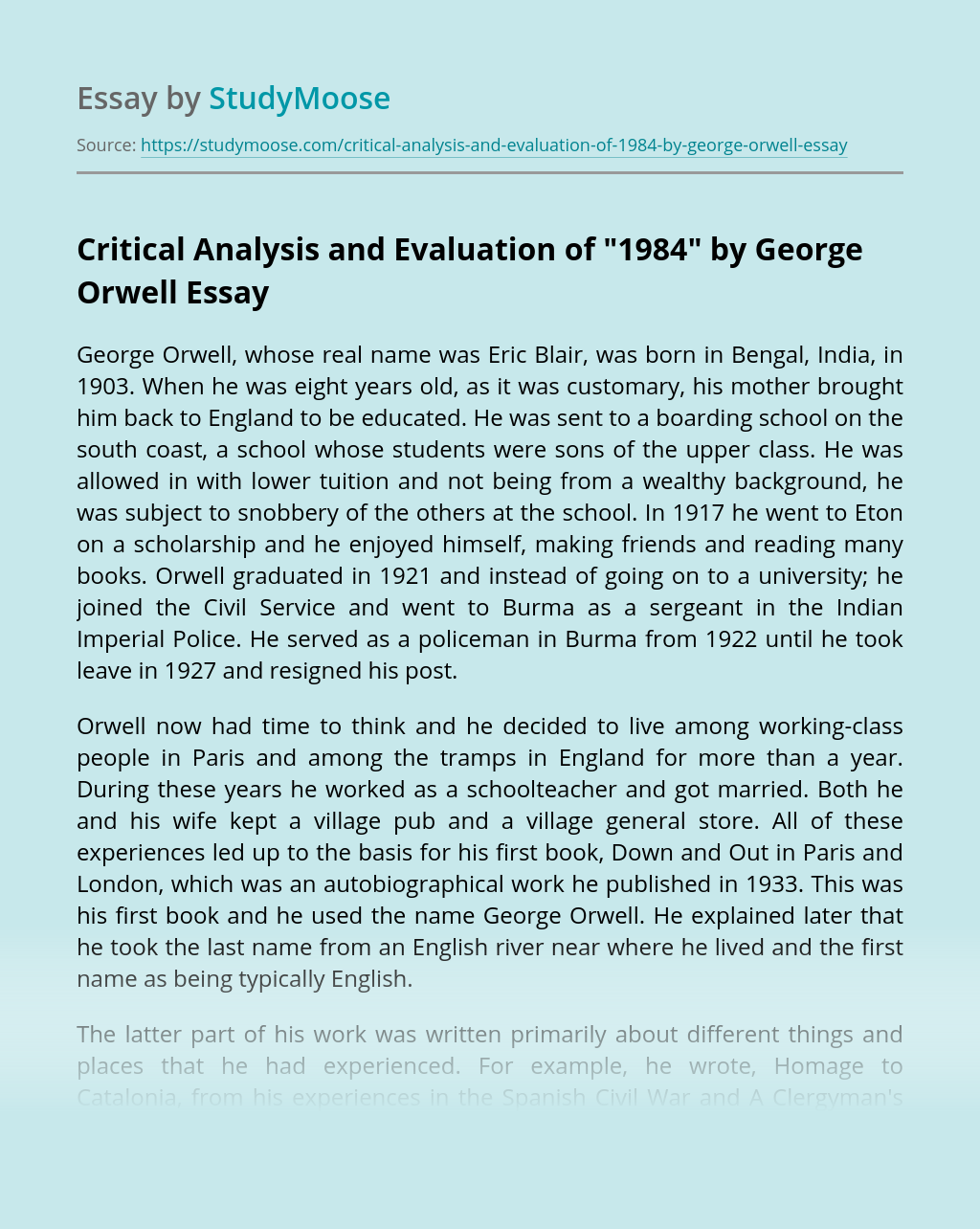