George Orwell uses his novel 1984 to convey that human beings, as a species, are extremely susceptible to dehumanization and oppression in society. Orwell demonstrates how a government’s manipulation of technology, language, media, and history can oppress and degrade its citizens. In 1984 the political manipulation of technology oppresses the people of Oceania and leads to the downfall of individuality and of the qualities that define humanity. Telescreens and the Internet are used not for entertainment purposes but to monitor people’s lives.

Don't use plagiarized sources.
Get Your Custom Essay on Oppression and Dehumanization in George Orwell’s 1984 Just from $13,9/Page

In Orwell’s case, Pynchon cites media technologies such as interactive flat-screen TVs and the Internet as instruments of surveillance’” (Deery). The impact of spying via the telescreens reduces people’s opportunities to behave freely. Therefore invasion of privacy happens daily and widespread paranoia sets in. “There was of course no way of knowing whether you were being watched at any given moment. How often, or on what system, the Thought Police plugged in on any individual wire was guesswork.

It was even conceivable that they watched everybody all the time.

But at any rate they could plug in your wire whenever they wanted to” (Orwell 2). The never-ending surveillance by law enforcement invades personal privacy. Without privacy, the freedoms and rights of individuals are demolished. By distorting technology the Party subjugates the people of Oceania. To maintain their totalitarian hold, the Party directly limits free speech and free thought by manipulating language itself. In a democratic society equality allows citizens to be different yet enjoy equal rights.

Repression of equality destroys people’s ability to act independently from one another. “In ‘Politics and the English Language’ (1946) Orwell lists ‘equality’ as one of those ‘words used in variable meanings, in most cases more or less dishonestly. ’ (5) In 1984 he reveals even sharper anxieties about the term: Here not only has the ideal of equality as understood by the best political thinkers been totally abandoned, but the actual word itself has been reduced by ‘Newspeak’ to mean no more than ‘identical’” (Kearney).

In 1984 politicians consciously manipulate concepts and ideas. This paralyzes the human ability to express feelings and emotions, which is exactly what the totalitarian government desires. “We shall crush you down to the point from which there is no coming back. Things will happen to you from which you could not recover, if you lived a thousand years. Never again will you be capable of ordinary human feeling. Everything will be dead inside you. Never again will you be capable of love, or friendship, or joy of living, or laughter, or curiosity, or courage, or integrity.

You will be hollow. We shall squeeze you empty, and then we shall fill you with ourselves” (Orwell 148). By manipulating language the Party replaces individual feeling with Party propaganda. To broadcast their dehumanizing propaganda, the government in 1984 manipulates the media and exposure to it. People are unable to form their own opinions and therefore must rely on the media to do so for them. The people of Oceania are unable to think critically, for example, about public figures. But what was strange was that although Goldstein was hated and despised by everybody, although every day and a thousand times a day, on platforms, on the telescreen, in newspapers, in books, his theories were refuted, smashed, ridiculed, held up to the general gaze for the pitiful rubbish that they were, in spite of all this, his influence never seemed to grow less” (Orwell 7). Through only allowing exposure to their propaganda the Party is able to control the minds of its citizens. Citizens are only exposed to propaganda glorifying the Party.

News propaganda is omitted of negative statistics and through this omission nothing is left to report but positive statistics. The people are robbed of an opportunity to criticize the Party, adding to their overall dehumanization. “The fabulous statistics continued to pour out of the telescreen. As compared with last year there was more food, more clothes, more houses, more furniture, more cooking-pots, more fuel, more ships, more helicopters, more books, more babies — more of everything except disease, crime, and insanity.

Year by year and minute by minute, everybody and everything was whizzing rapidly upwards” (Orwell 33). Through omitting the negative, the people are only informed of the positive. Society is left with nothing to question, and nothing to analyze. By deceiving the people, the Party is able to maintain support, and therefore power. This manipulation of media allows oppression to go unnoticed because the citizens are unable to think critically. By manipulating history and giving no opportunity for inquiry the government dehumanizes the people even more by destroying free thought.

The Party knows that memories will lead to questions, and then to critical thought. So it implements Doublethink and Newspeak as tools to negate the urge to question the legitimacy of the Party’s history. “The Party tacitly acknowledges the limitation of its control of the material and by implication the circulation of stories and memories by the implementation of both Doublethink and Newspeak. Doublethink can only be thought of as an imperfect system of thought control most at risk by the conjunction of materially anchored memory.

The very need for the existence of the concept acknowledges that failure, since from the trajectories traced through the material city there emerge spatial codes that challenges both forms of discursive control as well as a reformulated history” (Phillips). The government reformulates history, takes out the inconsistencies. The people are exposed to more propaganda. Due to their lack of critical thinking ability they are unable to question its accuracy. The Party maintains its totalitarian society by lying, cheating, and deceiving its citizens.

Accumulation of knowledge is one way that an individual can stand out from the rest. The Party makes it impossible for any knowledge to be accumulated, since history is always being rewritten. “If, for example, Eurasia or Eastasia (whichever it may be) is the enemy today, then that country must always have been the enemy. And if the facts say otherwise then the facts must be altered. Thus history is continuously rewritten” (Orwell 124). Through these alterations the government destroys the desire to question, and therefore the desire to criticize.

In Oceania the government forces its own citizens to participate in rewriting history. The Party oppresses the people by not allowing individual decisions. It demands that people must lie and therefore destroys an opportunity to speak freely. “The reporting of Big Brother’s Order for the Day in The Times of December 3rd 1983 is extremely unsatisfactory and makes references to non-existent persons. Rewrite it in full and submit your draft to higher authority before filing” (Orwell 24). By making citizens participate in the rewriting of their own history, the government is able to destroy individuality.

Through this forced involvement in the manipulation of history the Party corrupts the mind and wipes out any trace of individuality inside. While the people’s minds are vulnerable, they are filled up with propaganda in support of the totalitarian government of Oceania. Government facilities of Oceania clearly display the Party’s commitment to oppression and dehumanization. They are prepared to lie to, and deceive the people for years to come. “There were the vast repositories where the corrected documents were stored, and the hidden furnaces where the original copies were destroyed.

And somewhere or other, quite anonymous, there were the directing brains who co-ordinated the whole effort and laid down the lines of policy which made it necessary that this fragment of the past should be preserved, that one falsified, and the other rubbed out of existence” (Orwell 24). It’s shown that the Party does not care about humanity, individuality, or personal freedoms, therefore carries out its own agenda to achieve a society in which the people are totally controlled by the government. In conclusion George Orwell’s 1984 clearly depicts that human beings are susceptible to oppression and dehumanization in society.

Orwell’s predictions about the political use of these technologies appear to have been accurate. Hence today, ‘News is whatever the government says it is, surveillance of ordinary citizens has entered the mainstream of police activity, reasonable search and seizure is a joke” (Deery). Through 1984 Orwell shows how the citizens of Oceania are oppressed and dehumanized through the Party’s manipulation of technology, language, media, and history. Orwell warns that oppression and dehumanization may be carried out by governments around the world, secretly manipulating us.

Oppression and Dehumanization in George Orwell’s 1984. (2017, Feb 13). Retrieved from https://studymoose.com/oppression-and-dehumanization-in-george-orwells-1984-essay 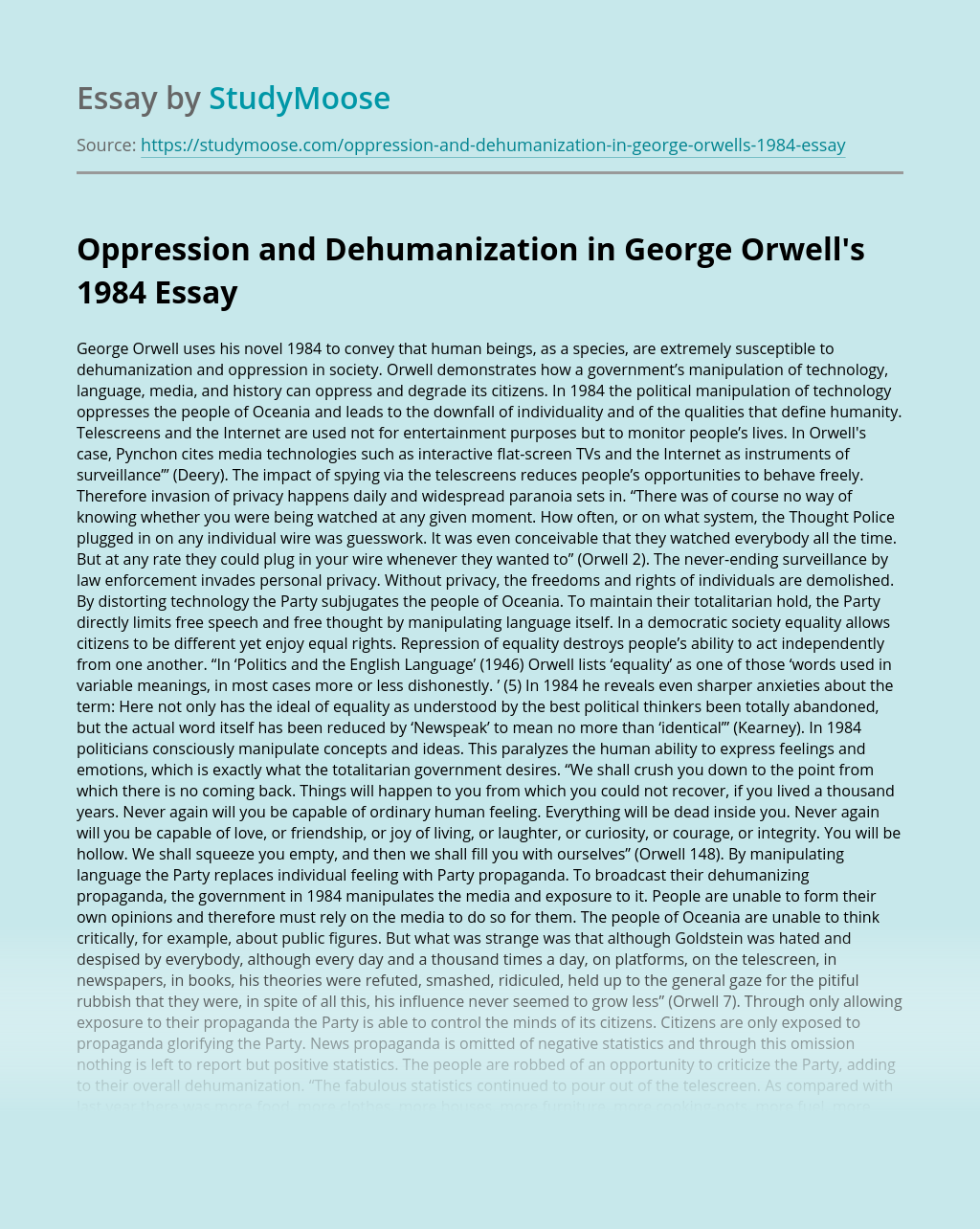 Dehumanization In The Holocaust

Rate this post As the German economy declined President Paul von Hindenburg looked for outside influences to help improve the economy. Using Adolf Hitler, Von Hindenburg terminated the democracy and started new laws. After Von Hindenburg died, Hitler took complete control as the new dictator of Germany. During World War I, Nazi Germany and its...

All Quiet on the Western Front: Victory

Rate this post Winston Churchill always said, “You ask: what is our aim? I can answer in one word: It is victory, victory at all costs, victory in spite of all terror, victory, no matter how long and hard the world may be; for without victory, there is no survival. ” In Erich Maria Remarque’s...

Get Essay
The Loss of Humanity: The Dehumanization of the Jews

Rate this post Elie Wiesel’s memoir Night is based on his experiences in the German prisoner-of-war camp of Auschwitz and Buchenwald during the Second World War. Having grown up an Orthodox Jew in the Hungarian village of Sighet, Wiesel and his family was deported to Auschwitz in 1944 where his mom and youngest sister were...

Rate this post Dehumanization played a crucial role in Beloved, slavery and the civil war by demoralizing, degrading and insulting African Americans. In Beloved, the slaves were dehumanized throughout the story. There were many instances where a slave was demoralized, degraded or abused. There were many instances where one would “get the bit”. In chapter...

Rate this post George Orwell uses his novel 1984 to convey that human beings, as a species, are extremely susceptible to dehumanization and oppression in society. Orwell demonstrates how a government’s manipulation of technology, language, media, and history can oppress and degrade its citizens. In 1984 the political manipulation of technology oppresses the people of...