An Analysis of Rebellion in George Orwell's 1984

As a new society unfolds, so do new values and authority. In 1984, George Orwell presents a futuristic vision of the power of government as well as its social conventions. Primarily, Orwell uses Winston Smith to exhibit the effects that government control can have on morality. Winston lives in Oceania where “The Party” exploits its complete power by controlling people emotionally and mentally. However, this disturbs Winston who subsequently challenges The Party and is provoked into becoming a rebel. He recognizes that he is at the point of no return; consequently, he marches blindly ahead in the hope of defeating The Party.

Don't use plagiarized sources. Get your custom essay on
“ An Analysis of Rebellion in George Orwell’s 1984 ”
Get custom paper
NEW! smart matching with writer

However, Winton’s defiant nature is quickly extinguished after he is caught and tormented for committing subversive acts. The once rebellious Winston is then forever changed, as he becomes a loyal subject of Big Brother. Winston’s challenge of Oceania’s imposed values and beliefs demonstrates humanity’s need and subsequent pursuit of freedom.

In Oceania, The Party is seen as the ultimate power; it imposes its authority and fear over its citizens with the use of technology.

From the street corners to Winston’s living room, the telescreens are used to monitor the thoughts and actions of its people. “It was even conceivable, that they watched everybody all the time. But at any rate they could plug in your wire whenever they wanted to. You had to live- did live, form habit that became instinct- in the assumption that every sound you made was overhead, and, except in darkness, every movement scrutinised.

” (Orwell 5). By not knowing which move is being watched or which words are being listened to, all privacy and freedom of speech is eliminated from their daily lives. The telescreens are used as a source of control and power rather than communication. They also display propaganda from the Ministry of Truth to support the Party’s actions and power.

The Party also uses the media as a tool for manipulation. Posters, slogans, and advertisements display messages such as “BIG BROTHER IS WATCHING YOU” and “WAR IS PEACE; FREEDOM IS SLAVERY; IGNORANCE IS STRENGTH”. These slogans, in addition to presenting Big Brother as a symbolic figure, work together to complete the manipulation and control of its citizens. However, altering the history and memory of Oceania also enforces political control. History books opportunely reflect the Party’s ideology which forbids individuals from keeping mementos such as photographs and documents from their past. As a result, the citizens have vague memories of their past and willingly believe whatever the Party tells them. “Who controls the past controls the future. Who controls the present controls the past” (Orwell 32). By controlling the past, The Party ensures that they control the future, and through false history, the psychological independence of people is controlled. By stealing people’s privacy, manipulating and manoeuvring their lives, and presenting altered history, the Party is able to exploit its power. Winston, a man with a conscience and a sense of right and wrong has no choice; he must fight for his beliefs.

Big Brother, a symbolic figure for power, agitates Winton’s morality. Although a member of the Party, he disagrees with the conventions of The Party. At first, Winston demonstrates his defiance using a diary as a secure place to keep his thoughts. “DOWN WITH BIG BROTHER” (Orwell 20). Here, Winston expresses his feelings about the party. He is aware that having or expressing thoughts against Big Brother is viewed as a thought crime in Oceania; nevertheless he also knows that he cannot sit back and accept their philosophy. “Thought crime does not entail death: thought crime IS death” (Orwell 30). Winston has the good sense to be extremely careful when writing in his diary; he is paranoid about being caught and places himself away from the telescreen where he hopes he will not be detected. This action demonstrates his unwillingness to simply accept the party line and the government’s control.

Another equally serious offence against the Party is his love affair with Julia. Well aware of the Party’s stand on pleasurable sexual activity, Winston, nevertheless, can not and does not suppress his desire for her. He also discovers that he is not the only one with these forbidden feelings. “That was above all what he wanted to hear. Not merely the love of one person, but the animal instinct, the simple undifferentiated desire: that was the force that would tear the Party to pieces” (Orwell 132). With the knowledge that he is not alone in this battle, Winston is even more committed and empowered to continue his defiance against the system. He recognizes that he must act cautiously and, in order to continue his affair without being caught, Winston rents a room above Mr.Charrington’s shop. Another subversive act is Winston’s communication with O’Brien, a leader in the Party.

Winton bases his trust of O’Brien through the voices in his dreams, the eye contact between them during hate meetings, and when O’Brien turns off his telescreen when the two meet. “Between himself and O’Brien, and of the impulse he sometimes felt, simply to walk into O’Brien’s presence, announce that he was the enemy of the Party and demand his help”(Orwell 159) Trustingly, Winston reveals his views to O’Brien, hoping that in the future, others will also join in the defeat of the Party. O’Brien convinces Winston that he is member of the Brotherhood; Winston eagerly joins. The authority the Party enforces over Oceania’s citizens seizes Winston’s morality and gives him the courage to increase the momentum of his rebellious acts. Unfortunately, a power far greater than his is watching his every move.

As Winston continues his treasonous acts, he realises there is no way out; his optimism for a better future has him stride blindly into shark-infested waters. Winston realizes that by writing in his diary it is only a matter of time before the Thought Police capture him. “Whether he wrote DOWN WITH BIG BROTHER, or whether he refrained from writing it, made no difference. Whether he went on with the diary, or whether he did not go on with it, made no difference” (Orwell 21). Intellectually, Winston realizes that he will probably get caught, but he cannot turn back. His affair with Julia boosts his ego and so he continues with the hope that other rebels will unite with him against the Party. Unfortunately, in his dream of defeating Big Brother, Winston becomes careless and his acts against the Party take him down a dangerous path, leading him into torturous consequences. Winston allows himself to take unnecessary risks, such as trusting O’Brien.

Unknowingly, the room he rents above Mr. Charrington’s shop to meet with Julia is under surveillance. Mr. Charrington, a member of the Thought Police, uses the telescreen to capture Winston’s sexual affair with Julia. As a member of the Thought Police, it is his duty to turn them in, and he does. He has the two arrested and they are sent to the Ministry. Winston’s carelessness now comes back to haunt him. In his eagerness to find others who loathe the system, he trusted O’Brien who led him to believe that he shares his hatred for Big Brother. However, Winston soon learns that O’Brien’s intentions are quite different. When Winston is caught, O’Brien visits him to “help” him through this wretchedness.

However, Winston’s misplaced trust is exploited when O’Brien preys on his biggest fear. He is taken to Room 101 where he is tortured both physically and mentally with his ultimate revulsion: rats. Winston’s fortitude collapses, changing his perspective. “…it was all right, everything was all right. The struggle was finished. He had won the victory over himself. He loved Big Brother.” (Orwell 311). Winston’s physical pain and mental anguish help him to now embrace the unquestionable power and wisdom of the Party. The irony is evident: Winston’s determination to defeat Big Brother is defeated… by Big Brother.

In Winston’s pursuit to gain independent thought, he struggles against the absolute power of the Party, thus demonstrating the battle between him and his government. In Oceania, the Party controls the people physically, mentally and emotionally in order to maintain their supremacy. However, the Party’s abusive power subverts Winston’s morality, aggravating him into rebellion. Once started, Winston realizes that he cannot turn back from his revolt, even though, intellectually he acknowledges that his battle could cost him far more than his freedom. He is driven to continue. Winston’s fervour for change comes to an immediate halt after he is caught and punished for his disloyalty to the Party. A man forever changed becomes a loyal supporter of Big Brother. Orwell’s 1984 is a frightening journey of a man’s fight for freedom of thought and expression. In 1948, when the book was written it was considered a futuristic view of society. Today, many of the events have already become a reality. Big Brother is indeed watching!

An Analysis of Rebellion in George Orwell's 1984. (2016, Aug 01). Retrieved from http://studymoose.com/an-analysis-of-rebellion-in-george-orwells-1984-essay 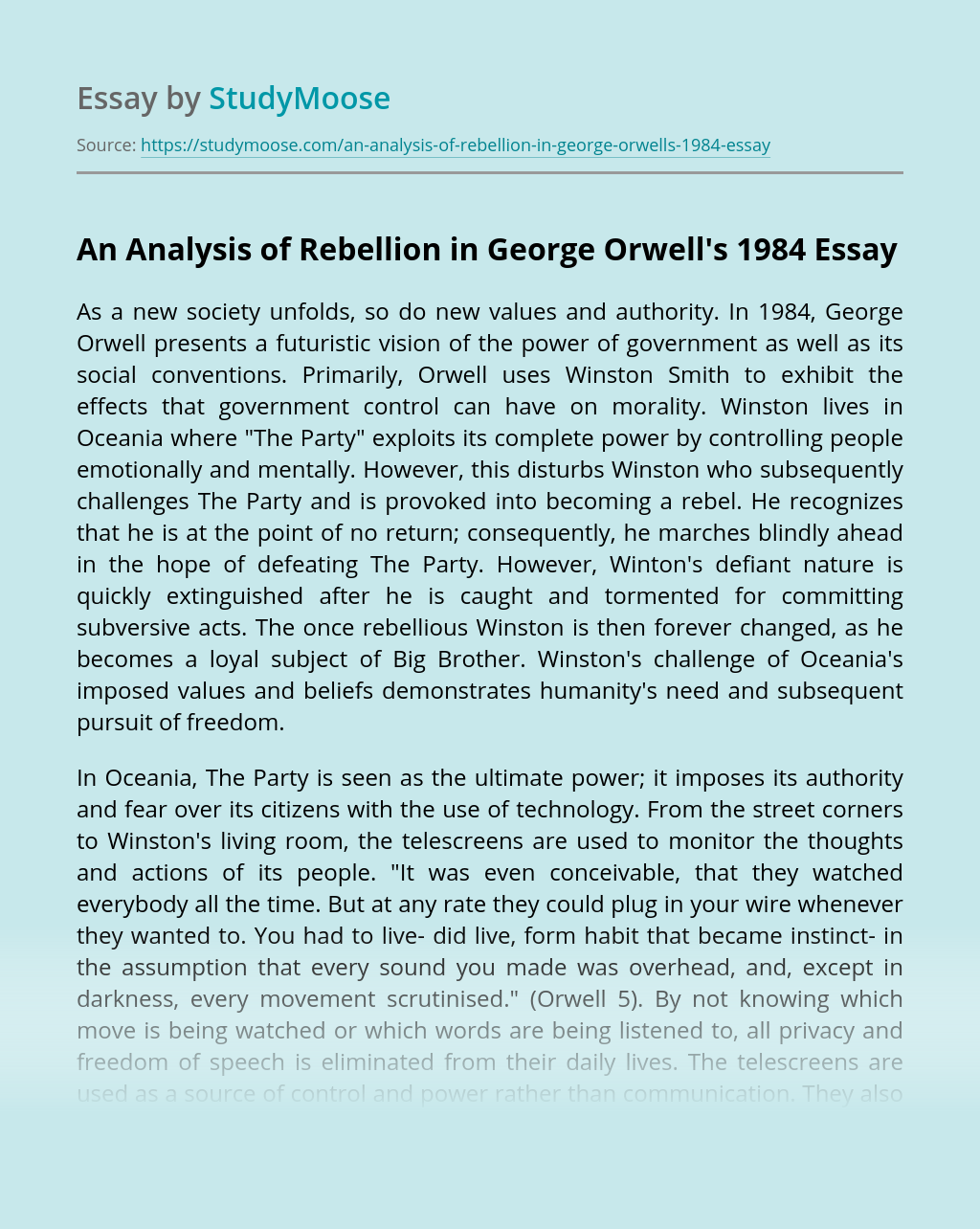