1984, a novel by English writer George Orwell, was a cautionary tale about the perils of a totalitarian society. Class distinctions are one of the worst dangers that were discussed in the novel. It was portrayed as a means for Big Brother to maintain his rule over Oceania. The different social classes in Oceania viewed each other as competitors for economic, political and social dominance. In the process, the possibility of a political rebellion in Oceania is quelled.

Don't use plagiarized sources. Get your custom essay on
“ Class Distinctions in George Orwell’s 1984 ”
Get custom paper
NEW! smart matching with writer

The respective lifestyles of these sectors were characterized with inequality – the Inner Party enjoyed more privileges than the Outer Party, although they both made up the Party of Oceania. Members of the Inner Party were accorded key government positions, had larger incomes and lived in luxurious homes. In sharp contrast, members of the Outer Party lived in dilapidated flats.

They also had to devote even their spare time to Party activities such as community hikes and games or risk being suspected as a “traitor” (K-1. com, n. pag. ). The proles are the backbone of Oceania – they are employed in industry and on farms. However, the Party accepts them as members of society only because of their capacity to produce. As a result, the proles live in extreme penury. They reside in districts where there are fewer telescreens and policemen – they don’t have any contact with the state as long as they did not commit any wrongdoing.

Consequently, proles can indulge in prohibited things such as prostitution, old books, old furniture and alcohol. The Party, on the other hand, does not pay much attention to what they do – the former regards proles as too uneducated and disorganized to pose as a serious threat to their rule (K-1. com, n. pag. ). Given that the ideology of the Party is Ingsoc (English Socialist Movement), it is ironic that inequality is very rampant among the citizens of Oceania.

The novel provided an explanation to this phenomenon through the fictional book The Theory and Practice of Oligarchical Collectivism. The latter believed to be written by a certain Emmanuel Goldstein, the leader of the dissident group the Brotherhood. But it turned out that the Thought Police created the book in order to trap Winston Smith (SparkNotes, n. pag. ). The book’s first chapter, Ignorance is Strength, argued that human societies are traditionally divided into three classes: the High, the Middle and the Low.

The objective of the High is to uphold its dominance over society. The goal of the Middle, on the other hand, is to attain the status of the High. As for the Low, it is too busy trying to find a way out of poverty to be concerned with matters that do not directly affect it. As a result, struggles throughout history share the same pattern. The Middle overthrows the High with the help of the Low in the name of justice and liberty. Once the Middle becomes the High, it thrusts the Low back to its original marginalized position.

A new Middle group will then emerge to repeat the cycle. The second chapter, Freedom is Slavery, was explained to Winston by O’Brien. According to O’Brien, the goal of attaining freedom is useless due to the inevitability of death. Thus, when “Freedom is Slavery” is reversed to “Slavery is Freedom,” it is implied that complete submission to the Party will grant an individual freedom in the form of experiencing the Party’s immortality and omnipotence.

The third chapter, entitled War is Peace, first identified the three superstates of the world: Oceania (the United States and the British Empire), Eurasia (Russia and Europe) and Eastasia (China, Japan and Korea). The chapter went on to argue that these superstates waged war with one another for economic reasons – they wanted to gain unlimited access to the natural resources of foreign lands and to find new markets in which they could dump their surplus goods. Furthermore, war in itself is already a possible solution to an economic slump.

An increase in the number of jobs in the defence sector due to war will increase economic activity by increasing the income of consumers (NewspeakDictionary. com, n. pag. ). Big Brother remained in power in Oceania through class distinctions. Class distinctions kept the people divided and fighting among themselves. As a result, Big Brother was able to manipulate them into serving his interests. The longer the people remained divided, the longer they remained enslaved. 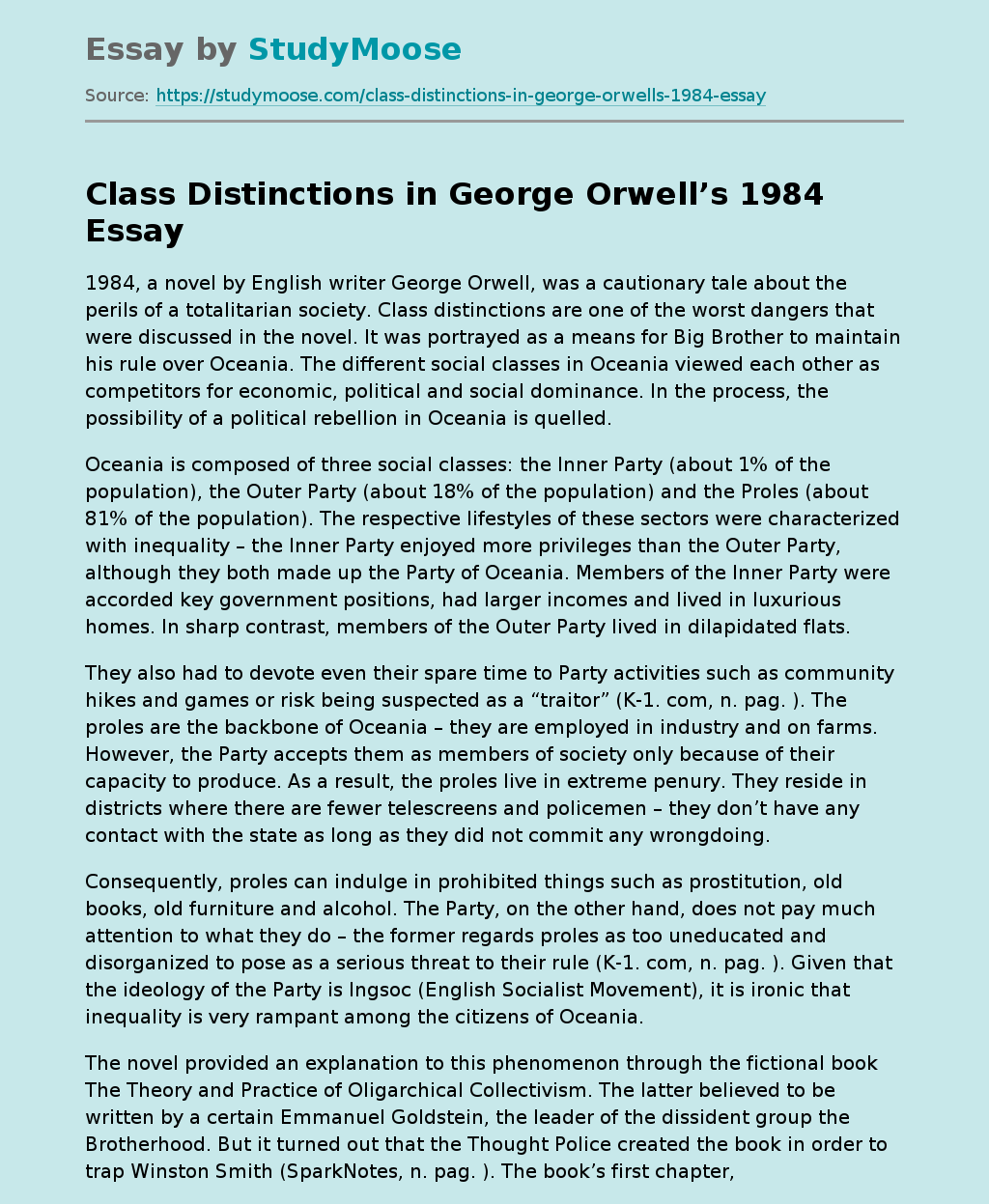