Analysis of the Character of Winston in 1984

Written by the author George Orwell, 1984 gives a terrifying outlook of society. George Orwell presents a world in which society, controlled by the State, is indoctrinated in propaganda and illusion. The main character is different from the rest of the people since he decides to defy the society he lives in. From the first chapters, the author creates the image of an unsatisfied man with the people surrounding him. The character of Winston, however, seems a bit of a paradox since, whilst he tries to rebel against his society, he irrevocably loves his job.

Don't use plagiarized sources. Get your custom essay on
“ Analysis of the Character of Winston in 1984 ”
Get custom paper
NEW! smart matching with writer

From the beginning of the book, Winston disobeys the Party’s orders (by writing a diary), showing his disapproval of the way society is. Furthermore, the fact that Winston keeps a journal, conscious of the danger he risks, is evidence that he hates his society. As the reader advances in the first chapter, he can witness Winston’s attitude towards the Party’s values and the society.

His attitude seems to always differ from the other employees. Indeed during the “Two Minutes Hate” whilst everyone seems to loathe Goldstein, Winston is only faking his hate. This shows his refusal into following the Party’s rules.

Moreover “Winston’s hatred was not turned against Goldstein but, on the contrary, against Big Brother, the Party and the Thought Police”. Winston has a very critical approach to the Party’s policies. Winston’s uneasiness towards the telescreen is further proof on how he feels about society. Indeed, the telescreen represents another controlling aspect of the society.

Winston also hates women, a specific part of society. They represent absolute obedience and depersonalization which he completely disapproves of. Yet, his feelings towards them are presented as complex since Orwell insists on the fact that he looks down at them but also feels attracted to them. Winston is however having issues with pretty women: he feels that they are joining blindly the Party. His strong hatred for them is shown by the wish to hurt them: “flog to death”, “shoot arrows”, and “cut her throat at the climax”…

However his apparent complicity with O’Brien shows, underneath all the hatred, that Winston is actually longing for a friend in this society he hates. This complicity is due to the fact that Winston feels closely to O’Brien as he defied Big Brother’s authority. Winston might have then felt like he was not the only one to fully despise the world he lives in. Winston’s hatred for is society has a paradoxical aspect since he reject his society’s values and deeply loves his job at the same time. This seems paradoxical because Winston despises the fact that the Party controls, modifies everything whilst his job consists in modifying documents.

His job consists in modifying documents, as if he were rewriting History to make it coherent with the Party’s claims. Winston’s job requires organization skills, with special attention for dates. The reader learns that “Winston’s greatest pleasure in life was in his work”. The benefits that his job brings to his life are escaping his life and a position of power. The position of power might refer to the fact that Winston can change elements of the world he lives in and furthermore which might make Winston feel in complete control of his life and work.

However, Winston is far from being “in control” of anything, but he does have a certain amount of power at the Ministry, considering he is allowed to access archives. This could explain why Winston likes his job so much. Furthermore it seems that Winston is able to interact with the past and its “real” version being closer to reality than the updated version. On the other hand, Winston expresses a sense of uncertainty concerning the exact authenticity of the version he received. In addition, it is because Winston hates his society he uses his job as a way of forgetting his sad life.

His job requires a lot of concentration and dedication, which is exactly what he needs to escape his boring daily routine. Because he is so involved in his job, his life becomes easier. This means his job gives him the possibility of somewhat escaping from the horror of living under such an regime. 1984’s main character Winston is a complex man, who refuses to conform to the norms of society and chooses instead to defy it, while at the same time he very much enjoys his work at the Ministry. Winston hates his society, yet loves his job. This is coherent because the aspects of society that Winston so despises are changeable by his job.

Analysis of the Character of Winston in 1984. (2017, Mar 01). Retrieved from https://studymoose.com/analysis-of-the-character-of-winston-in-1984-essay 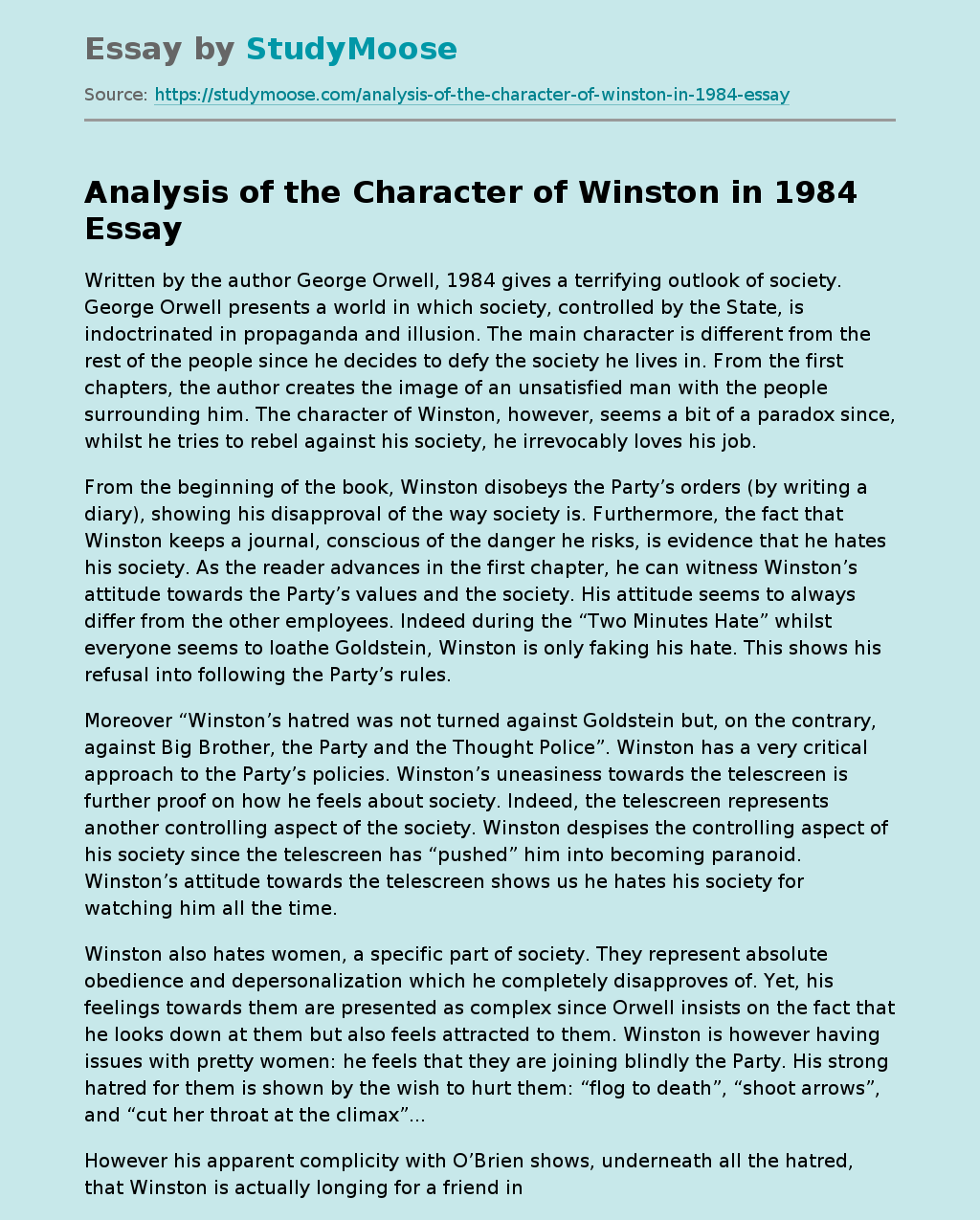