George was a bank clerk (who ‘goes to sleep at a bank from ten to four each day, except Saturdays, when they wake him up and put him outside at two ‘) and was living in a back room of the same house. The landlady suggested that, to save money, the two might share a room. They ‘chummed ‘ together for some years – both shared a love of the theatre -and a life-long friendship was formed. George, who remained a bachelor, rose to become manager of Barclays Bank in the Strand and outlived.

Don't use plagiarized sources. Get your custom essay on
“ Character Sketches ”
Get custom paper
NEW! smart matching with writer

Harris is a vain fellow who pretends to be extremely hard working but usually pushes off the burden on other people. he is outspoken and does not hesitate to tell his friends what he thinks about them even if it may not be pleasant. for example he outwardly tells george that his new blazer is utterly revolting and that he must not wear it around them (harris and j).

when harris takes on a job he makes a huge fuss out of it like the narator;s uncle podger. it may not be anything majorly important but if harris is going to do it …. the world would know about it. he also thinks very highly of himself and his voice though his friends do not want him to even attempt singing. he is extremely fascinated by tombs and graveyards much to j ‘s dislike. he is also quite short tempered and it is best to let him rant off his anger rather than try and talk to him about it.

he wouldn ‘t mind a drink at any time of the day and enjoys the company of his friends .

Jerome is the narrator of the book. He is a young, single middle-class man living in London, much like the author himself at the time of the publication of the book, and the initial J is possibly meant to suggest that he stands in for Jerome. J is fond of history and literature and spends much of his time daydreaming about the days when knights roamed the countryside of England. This daydreaming sometimes gets him into trouble when he does not pay suitable attention to what he is doing. J, like his two friends on the boat trip, is a little vain and conceited, but he realizes it and pokes gentle fun at himself, his friends, and the habits of others like them through his anecdotes, where he and his friends are often the butt of ego-skewering jokes. J has always been fond of boats, but prefers the old fashioned…

Montmorency is the dog that accompanied the three men in their river trip. Monymorency looked like an angel sent to Earth in the form of a small Fox Terrier. He had a gentle noble expression which brought tears to the eyes of elderly folk. When Monmorency first arrived , the author thought that he would not live long. But , he soon changed his opinion about Montmorency when his true nature was exposed.

The author had to pay for chickens Montmorency had killed and had to drag him out of umpty street fights. Once Montmorency killed the neighbours cat and on one occassion he had kept a man stuck in his own toolshed for about two hours. The author ‘s gardener made money by betting on Montmorency ‘s rat-killing skills. He liked to roam around and fight with dogs of a similar disreputable nature. Therefore, he enjoyed places like inns and pubs. 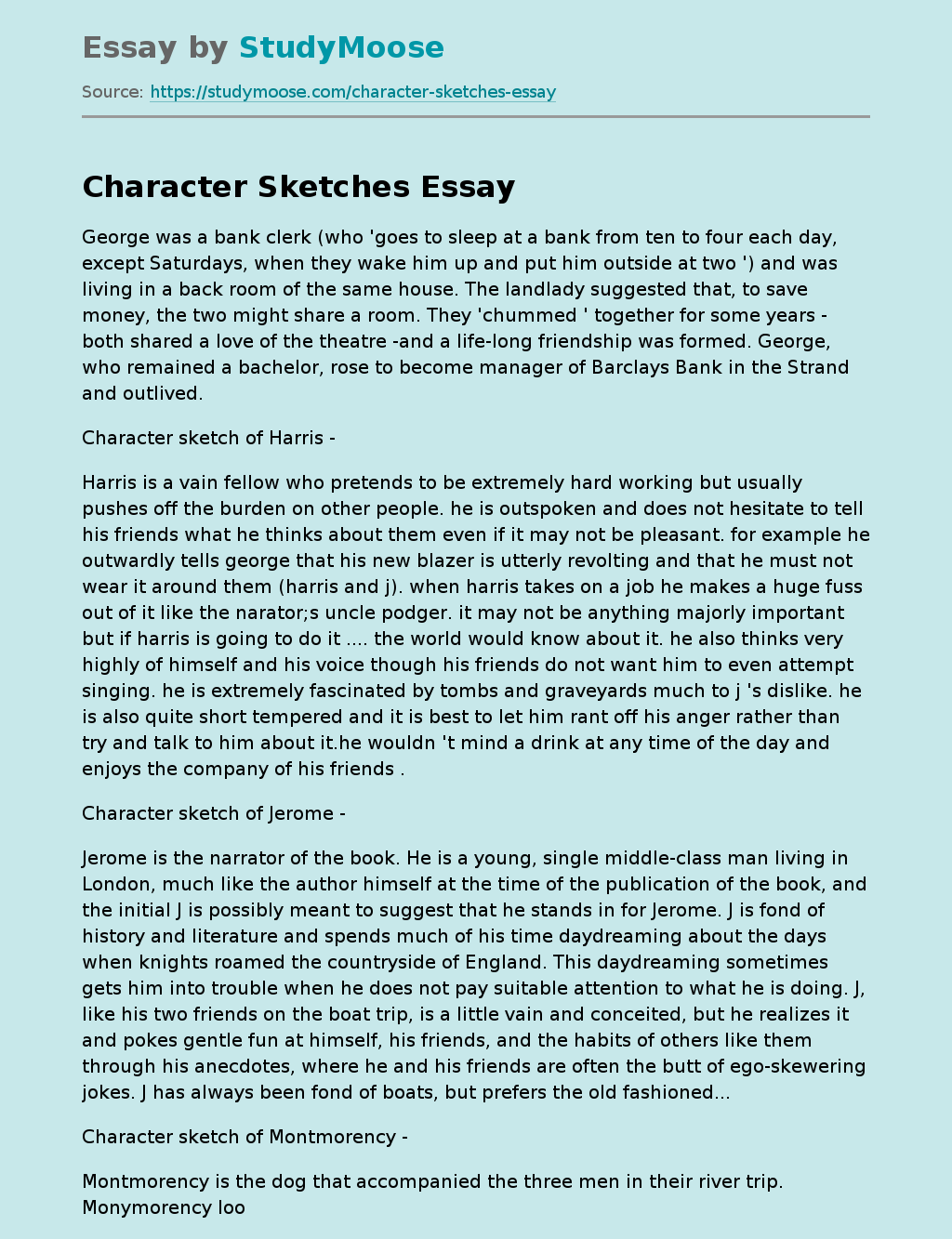