A Summary of Robert Harris’ Pompeii

The novel “Pompeii” is basically about one of the most famous natural calamities in known history, the explosion of Mount Vesuvius. Robert Harris should be commended for the immense research that he had infused in the text, both on history and engineering. Readers are treated to a blast to the past particularly during the time of the Romans. The timeline of the narrative is set a few days before the infamous eruption of Mount Vesuvius, an explosion said to be more powerful than the atomic bombs of Hiroshima, an explosion that lasted for a whole day and a whole night.

The book is rich in vivid description of the setting, tension between characters, and subtle twist and turns. These elements amalgamate to produce an effect of heavy build-up which would make the novel as explosive as an angry volcano, and yet at the same time undeniably stunning. Throughout the text, enriching history and impressive engineering details are interwoven. This aspect of the novel was particularly interesting because readers would realize and appreciate the importance of aqueducts.

The novel shared that it was the ingenious water supply that enabled the Romans to prosper amidst the hot climate.

The novel was also written in a modern tone that made it easy to follow. And just like the effect of “Titanic”, the readers of “Pompeii” already knew that the volcano is about to explode, but the characters do not. This aspect of the novel is one effective technique to keep the readers turning the pages.

Characters Attilius – is the hero of the story. A young engineer from a family of aqueduct engineers. An intelligent person who actions are always guided by reason. He still mourns the death of his wife. Pliny the elder- leader of the fleet who helped Atillius to get to Pompeii.

The character in the novel is actually a real figure in history. Revered as a person of knowledge and leadership. Corelia – the young daughter of Ampliatus. The object of affection Attilius. Reminded him of his deceased wife. Exomnius – The aquarius who mysterious vanished without notice. Later in the plot, it would be revealed that Exomnius was a corrupt aquarius in connivance with the more corrupt Ampliatus. Ampliatus – The main antagonist of the story. A former slave turned rich through claiming the properties of his dead master. A greedy and self-righteous businessman.

Could only be described as selfish and detestable. Corax – Subordinate of Attilius whose job is overseer. Looks down on Ampliatus probably because of he is older. Brebix – A strong hardworking man who respects Attilius’ position Massavo – a porter with a large head. He posses a cheery attitude. Plot The protagonist of the story is Marcus Attilius Primus. He was assigned to be the aquarius of major aqueduct, the Agua Agusta, which was sixty mile aqueduct. This was an important task because the Agua Agusta is the source of water to all the cities in the Bay of Naples.

Even though the task at hand is tremendous, Attilius was determined to do the job. It seems that aqueduct engineering is running through the veins of Attilius. He came from a family of aqueduct engineers. He is a quite a young engineer, even his physical appearance does not lie about his young age. He is viewed by his subordinates as too young to be an aquarius at his age of 27. The term “aquarius” pertains to the title given to the main engineer of the aqueduct, the one who responsible for the aqueduct. An aquarius could translate to hydraulics engineer.

His youth made it difficult for him to gain the respect that he deserve from his work gang. With Attilius in command, his subordinates acted and did their job underperforming, as if it was against their will. One of his subordinates heckled “boys should stick to their books” (Harris 3). But of all his subordinates, it was Corax, the overseer, who had given him a difficult time. The plot would gain momentum when Attilius received a new assignment. A stack of mystery would build up in the plot. From this point on, the novel would have a detective-story-like taste to it.

Attilius reasoning and his talent in problem solving is put to the test. Then comes a mystery that would make Attilius wonder. The previous aquarius of the aqueduct (named Exominus) had mysteriously disappeared. In addition, the area, which the aqueduct is suppose to supply water, is experiencing drought. And as additional concern, fishes die because of the water. Attilius investigates the mystery of why the fishes had been dying. He soon discovers that there was sulfur on the water and the substance was killing the fishes. During this point of the text, Numerius Popidius Ampliatus, the main antagonist, enters the scene.

He was a former slave who was liberated when his master died in an earthquake. Ampliatus accumulated his riches by claiming the properties of his deceased master. He seemed to got away with his mischief because no relative came to claim the properties. Actually, it was Ampliatus who was the owner of the fishery where the fishes were killed due to the sulfur contamination. He blamed the slave responsible for the fishery. It should be noted that the fishes that were killed were of the expensive kind. And in a truly villanous act, he fed his own slave to eels.

He even seemed to enjoy the sight of the slave being devoured by the eels. As he himself were not born as a slave. Then Corelia tried to save the poor slave. Corelia was a charming, young, and kind woman. The irony in her character is that she is the daughter of the detestable Ampliatus. When Attilius saw Corelia, the woman immediately reminded him of his deceased wife. And from there on, their romance would bloom gradually. Readers would soon witness what Ampliatus is really planning. The villain wants to be the provider of water to Pompeii.

In his evil plan, he was in connivance with Exomnius, the aquarius who disappeared. Exomnius was actually corrupt and was stealing from the imperial treasury. Amidst all of these mysteries, the receding flow of water to the Bay of Naples had entirely stopped flowing from the aqueduct. And because he was the aquarius, Attlius had to find a the source of the problem. He concluded that there must have been a blocked section of the aqueduct. Attilius would receive some help from Pliny the Elder. Pliny the Elder was the commander of the fleet that was docked in Misenum.

From then on, Attilius organized an expedition to go to Pompeii with the mission of clearing of the blocked section of the aqueduct. During this part of the narrative, Pliny the Elder’s characteristics seemed to mirror that of Attilius. The former was a man of knowledge and of good leadership. The same goes for the latter, but he seemed a little bit unrefined probably because of his young age. The line “Pliny never had difficulty in issuing for it was the essence of his command” is in contrast to how Attilius was treated by his subordinates during the initial portion of the novel (173).

Attilius and Pliny the Elder discovered that there were thousands of Roman coins (or sesterces) at the bottom of the aqueduct. They also realized that Exomnius was plotting to retrieve the coins for himself. Then the complications stated earlier in the novel had started to resolve themselves. Corelia brings Attilius documents that would put a stop to his father’s wrong doings. Then the highlight of the novel would be of course the eruption of Vesuvius. Pompeii and neighboring was completely ravaged. Ampliatus died because he did not want to leave his property.

He was truly a greedy man until the very end. Pliny the Elder also died while helping other people to safety. Attilius went back to save Coreliia not mind the risk. The two somehow managed to locate each other. And even though they had tried, escape was seemingly impossible. Fortunately, Attilius knows the underground passageways below the aqueduct. Water was already filling in, they decided to dig even though they know they could be either drowned or buried alive. The book concluded with Attilius and Coreila managing to dig their way through the aqueduct.

It was not cleared as to whether the two had survived. However, the last sentence says that there was a man and a woman who came forth the ruined aqueduct after the explosion. Conclusion The complications that Attilius had to face became microscopic when it was compared to the eruption of Vesuvius. The story is derived from one of the most famous natural calamities in history. Fortunately, the novel was far from being a disaster but rather a stunning showcase of how could nature silence us in our petty concerns.

A Summary of Robert Harris’ Pompeii. (2017, May 01). Retrieved from http://studymoose.com/a-summary-of-robert-harris-pompeii-essay 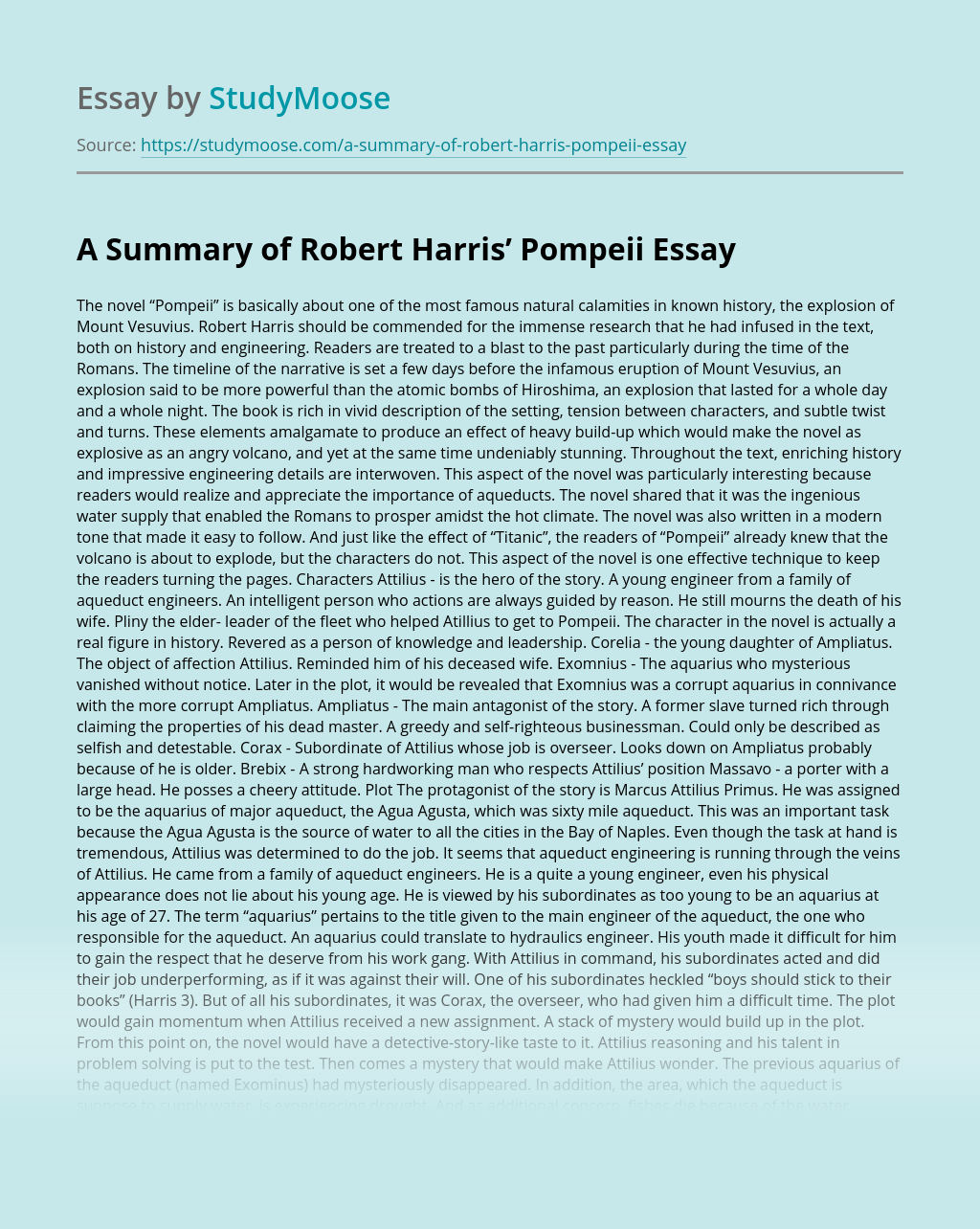 Don’t waste time
Get a verified expert to help you with A Summary of Robert Harris’ Pompeii
Hire verified expert
$35.80 for a 2-page paper
Stay Safe, Stay Original