A coward, by definition, is a person who lacks courage, especially one who is shamefully unable to control his fear and so shrinks from danger or trouble. In the short story, “Jealous Husband Returns in Form of Parrot”, Robert Olen Butler makes the point that cowardly behavior can ultimately lead to ones demise through his use of plot, characterization, symbolism, and irony. In this story, Butler portrays a jealous husbands cowardly behavior when dealing with his supposedly cheating wife, which leads to his death.

Don't use plagiarized sources.
Get Your Custom Essay on Jealous Husband Returns in Form of Parrot by Robert Olen Butler Just from $13,9/Page

He then returns in the form of a parrot to endure the pain of his decisions. As demonstrated by the husband, who is the main character in this story, cowardly behavior can be caused by weaknesses as relatively common as uncontrollable emotion and in-the-moment compulsion, combined with an aversion to attacking life’s problems head on. However, in this story the effect of this behavior is even more devastating and heart-breaking; it can be the ultimate demise of what could have been a long and otherwise meaningful life.

The story takes place in Houston and begins with the husband already in his bird form. He is in pet store with other parrots and his wife walks in. She does not know its him but she immediately picks him out over the other parrots. When he gets settled in his new cage at home, the husband begins reminiscing about his past cowardly actions that got him into his current situation. His insecurities began when his wife continually mentioned the new guy at her work. His cowardly actions follow soon after when he states that “my goal was to hold my tongue about half the time” (Butler, 188).

Instead of confronting her with his allegations, he locks himself up to keep quite. Later he finds the name and address of the man he suspects his wife is sleeping with. Still in human form, he makes the most cowardly decision yet and decides to spy on his wife’s possible lover. He goes to the house on a saturday afternoon and the neighborhood is empty. He heard sounds from the second floor window so he climbs a tree to get a better look. His desperateness for answers bring him dangerously close to the end of the tree branch, bring him to his final moments as a human. He feel from the tree, hitting his head and ending his human life. His cowardly behavior ultimately lead to his death. None of this would have happened if he confronted his wife. He was so scared that she would leave him that he never said a word to her.

Right from the start, Butler characterizes the husband and his lack of courage. The husband starts off by stating, “I never can quite say as much as I know” (187). Throughout the story, the husband’s continues to show this cowardly behavior by never confronting his wife about any of his accusations. Instead he suffers from his bottled-up feelings of inadequacy, low sense of self worth, and fear of losing his wife if he were to confront her with allegations of having extramarital affairs. Butler continues to shows the cowardly characteristics of the husband when he goes behind his wives back to try and find answers.

He described the event, stating, “I was holding on to a limb with arms and legs wrapped around it like it was her in those times when I could forget the others for a little while. But the crack in the shade was just out of view and I crawled on along till there was no limb left and I fell on my head” (188). Instead of confronting his wife or her lover, he engaged in an act of snooping, which ended his human life, and turned him into a parrot. As a result of the husband’s cowardliness, he endured a hellish existence as a parrot.

Even in parrot form, he continued to express his feeling of jealousy and inadequacy as a husband. His emotional problems, however, did not stop at feeling of being an inadequate husband. He also showed serious signs that he lacked a sense of self worth as a person. He seems to base his worth on his wife’s affection toward him, and expressed almost a feeling of helplessness without her. He belittled himself and his role in the relationship, stating, “When we held each other, I had no past at all, no present but her body, no future but to lie there and not let her go. I was an egg hatched beneath her crouching body, I entered as a chick into her wet sky of a body, and all that I wished was to sit on her shoulder and fluff my feathers and lay my head against her cheek, my neck exposed to her hand” (189).

By comparing himself to a chick, the husband expressed an inherent need to be cared for, and showed no sign of capability in coping with life on his own. In the end, the jealous husband (in the form of a parrot) committed his final cowardly act: he made the decision to purposely fly into the window and kill himself. This act was the most absolute and appalling effect of his cowardly ways. The last lines of the story are an insight into the husbands suicidal thought process. He said, “And I spread my wings. I will fly now. Even though I know there is something between me and that place where I can be free of all these feelings, I will fly. I will throw myself again and again there. Pretty bird. Bad bird. Good night” (191).

A huge potential for disaster in the husband’s marriage was symbolized as he displayed a pitiful lack of assertion. He was more than aware that his wife was engaging in an affair, but fear of losing her kept him from confronting her the way he could have. He described his cowardly dilemma, stating, “Hey, I’m not stupid. She said another thing about him and then another and right after the third one I locked myself in the bathroom because I couldn’t rage about this anymore. I felt like a damn fool whenever I actually said anything about this kind of feeling and she looked at me like she could start hating me real easy and so I was working on saying nothing, even if it meant locking myself up” (188).

By locking himself in the bathroom, he is taking the cowards way out of confronting his wife. This is a great use of symbolism, as he is metaphorically locking up his emotions and problems when he should be dealing with them and his wife. This is the same cowardly behavior that led to the husband’s demise, and is consistent with the symbolism of his life as a parrot, in which he was locked in a cage, just as he was locked in the bathroom as a man.

The most heart-wrenchingly part of the husband’s story, however, is not just that he had his heart broken daily; it was the simple fact that there was absolutely nothing he could do about it because he is now a bird. Butler displays irony when the husband, in his parrot life, compares his lack of communication in his marriage to his absolute inability to say what he thought as a parrot. In his human life he bottled up his emotions and feelings but now that he is a parrot he has a lot to say but no words to express them. He sat in a cage, wanting desperately to speak his mind, and express his love to his wife, but he couldn’t. He made the thought-provoking statement, “I can never say what is in my heart to her. Never” (190).

The effect of his cowardly behavior, by not saying what was in his heart in his human life, had made it even more impossible to communicate after he had fallen out of the tree and died. The husband states that “the crack in the shade was just out of view and I crawled on along till there was no limb left and I fell on my head” (188). The fact that he had fallen out of a tree and is reincarnated as a bird is also totally irony too. Butler could have reincarnate the husband as any animal and he chose a bird and birds don’t fall out of trees.

With this story, Robert Olen Butler clearly demonstrates that cowardly behavior can lead to ones demise with his use of plot, characterization, symbolism and irony. As a result of uncontrollably strong emotions, insecurities, desperately compulsive actions, and failure to engage in direct confrontation with his offenders, the husband died a sudden and cowardly death, only to return as a parrot, and suffer the intolerable pain of witnessing his wife’s heart-breaking promiscuity.

The ultimate result of his cowardly behavior was his suicide, which closed this cowardly tale with an appropriately cowardly ending. This story could be interpreted as a testament of failure to challenge a person’s own fears. This story is relevant to life because it is likely that devastating consequences, such as the ones experienced by the jealous husband, can be avoided by facing fears with courage, and standing up for one’s self with conviction, in spite of danger or trouble. 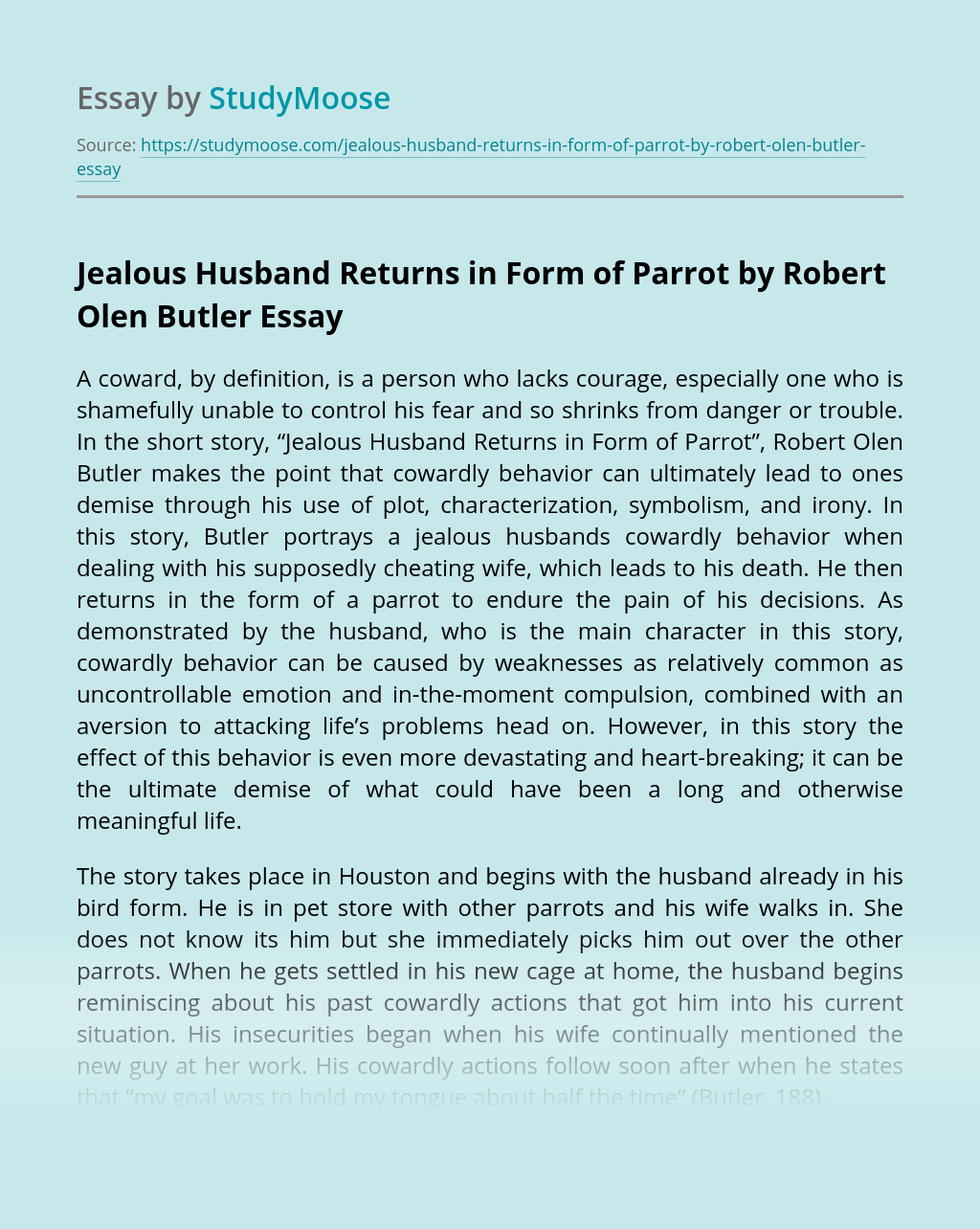 1. Which of Schwartz’s 10 values are driving the habits of supervisors at Bain & & Business, House Depot, and Best Buy? Offer examples to support your conclusions. Bain’s management is driven by he Schwartz’s values of power and self- direction. In a downturn, he chose to go against the grain and take benefit of...

View sample
Get Essay
The Knight in Rusty Armor

The Knight’s armor represents how he masks his feelings and hides from other individuals. He does not reveal his sensations and the truth that he got his armor stuck meant he didn’t know how; after concealing his feelings for so long, he had forgotten what it implied to express them. “We’re all stuck in armor...

The movie Sybil brought out several different emotions and reactions personally for me. The story line follows a young woman’s struggle with personality disorder; the cause and effects of her disease throughout her life, and the process of her repressed memories finally coming to the surface. Although I wouldn’t say that the disorders that Sybil...

“I experienced a sensation…of burning heat; and as if the letter sere not of red cloth, but red-hot iron.” These words in the introduction to The Scarlet Letter describe the letter as an object that contains power. The power left in the little red piece of cloth represents all the emotional toil that was associated...