Winston Churchill as a Leader

Sir Winston Churchill was a charismatic visionary leader, because of the passion he brought and his ability to use transformational leadership through his words to galvanize his countrymen. Churchill spent a lot of time on his speeches. He would work tirelessly on every word and every sentence to ensure his speeches had the proper flow. Through the use of inspirational motivation, as it is covered in the Full Range Leadership study guide, he would use this capability to inspire with his, ”must achieve future” approach.

Don't use plagiarized sources. Get your custom essay on
“ Winston Churchill as a Leader ”
Get custom paper
NEW! smart matching with writer

(Thomas N. Barnes Center for Enlisted Education, 2017, p. 11) I think he was influenced by the love of his country. He felt the Empire was still strong, influential, and a very active world power. According to Norman Rose’s Churchill: The Unruly Giant, there was an American Broadcaster, Ed Murrow, who heard some of Churchill’s speeches and stated, “Churchill mobilized the English language and sent it into battle.”

A prime example of Churchill’s ability to motivate his country was when France fell to Germany during World War II.

When France fell to the German Army in 1940, despair fell into the hearts of the British people. (Rose, 1994) One of the major power in Europe was crushed and fueled doubt if Britain could stand alone against the Nazi Regime. Churchill had to instill hope, that inspirational motivation to induce bravery in courage in his people.

Another visionary trait of Winston Churchill was that he used his dispositional flexibility, as according to the Change Management study guide, in how he was openminded and looked at flexible changed to defeat Germany twice by providing, “optimism grounded in realism and openness (Thomas N. Barnes Center for Enlisted Education, 2017). He did this by seeing the possibilities of military advancements and willing to take risks. According to Caroline Longstaff in her 2005 article, Winston Churchill, a leader from history or an inspiration for the Future? She discussed how Winston Churchill didn’t rely on the reports he received when he was the First lord of Admiralty (Longstaffe, 2005). Instead, he wanted to talk to the soldiers and sailors face-to-face. He would go down to the trenches and ask them if his decisions were effective. He would immerse himself into what the troops needed. He would push the advancements of tanks, the royal Navy Air Services, and the conversions of the Navy’s fuel from coal to oil (Longstaffe, 2005). These were innovative for their time and may seem intuitive now, but he was open to the change. He saw the advantages where others didn’t. If he wasn’t willing to stand up and make his point, the war would have been loss. He was motivated to protect the Empire. However, with the willingness to protect the Empire it was by any means, whether it was ethical or not.

Winston Churchill as a Leader. (2021, Apr 15). Retrieved from https://studymoose.com/winston-churchill-as-a-leader-essay 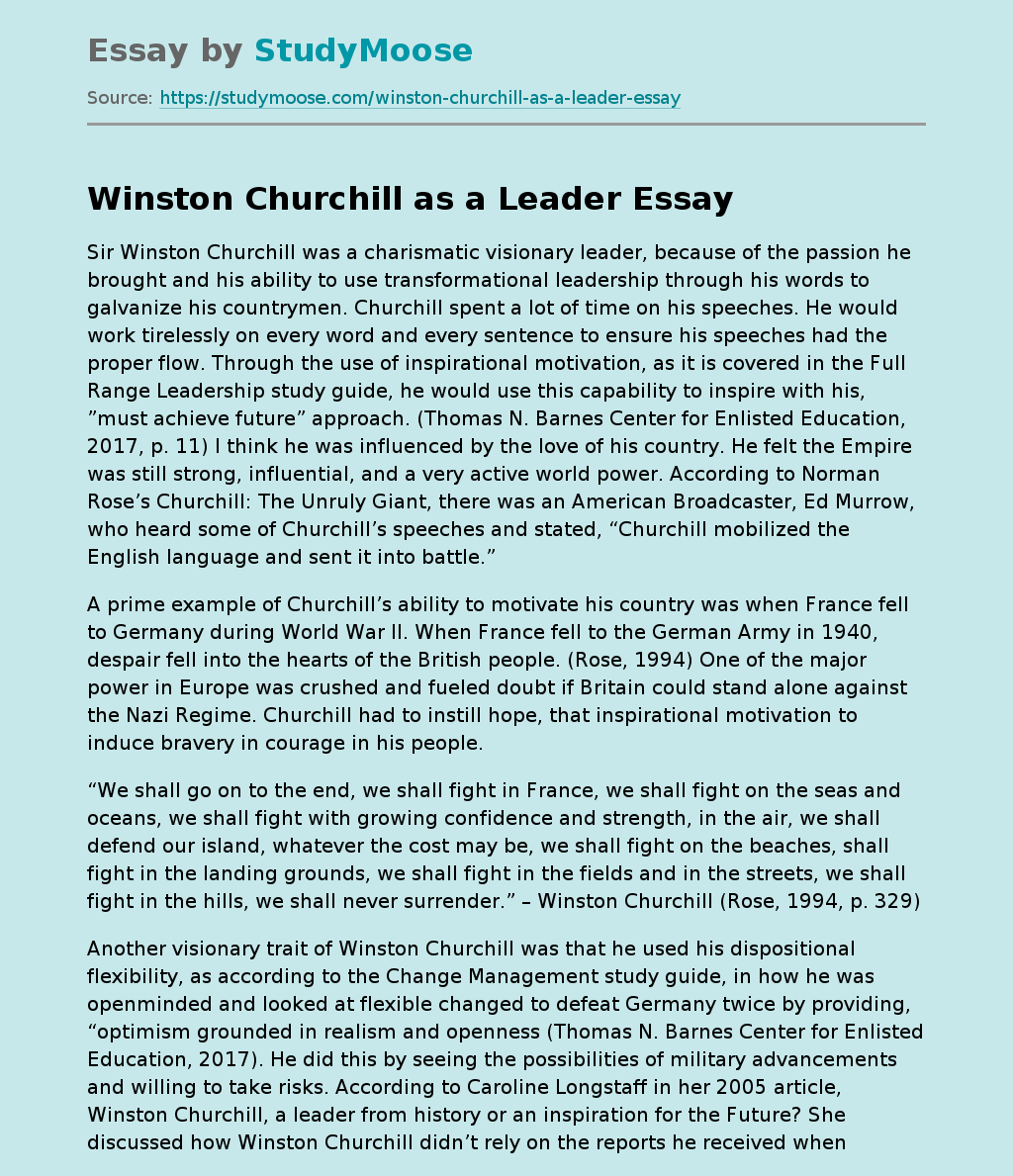