How does the diction of a literary work help to convey the writer’s message? Is there a specific way it helps the author persuade you? Martin Luther King Jr.’s “Letter from Birmingham Jail” displays many forms of rhetorical strategies, language, and diction in order to help convey his message of “unjust” or “just” laws. The diction in this literary work is very important in aiding King to help convey his message. By appealing to pathos a lot, he creates a feeling of hope and despair for the reader to choose which is more prominent in the lives of African Americans.

Turn in your highest-quality paper
Get a qualified writer to help you with
“ “Letter from Birmingham Jail” rhetorical analysis ”
Get high-quality paper
NEW! AI matching with writers

King wrote the “Letter” in response to the eight clergymen from Alabama who called his actions “untimely and unwise”. When he explains the reasons for him being in jail, King uses the argument that this injustice that was in Birmingham was everywhere and that people needed to do something about it. King’s diction, historical and biblical allusions, and rhetorical questions compose his eloquent diction in “Letter” that helps him show the importance non-violently fighting for rights.

King used many historical allusions to exemplify his reasoning for the rights of his people. Similar to the beliefs of Thoreau, human laws may sometimes contradict the most basic rights given to man by a higher being. King supported his argument by stating, “We should never forget that everything Adolf Hitler did in Germany was ‘legal’ and everything the Hungarian freedom fighters did in Hungary was ‘illegal.'” (210). These laws passed in Germany were man-made laws that contradicted higher laws and peoples’ religions.

Even though the concentration camps were horrible and disgusting acts forced on the Jewish people, they can’t be condemned, legally, because they did not come into conflict with Germany’s laws. This example helped to show how the legality of an act can often be a threat to the lives of many people. By doing this, King forces the reader to consider which laws in their lives, whether they realize the seriousness of them, may be infringing on the basic rights of man.

King’s use of religious figures shows the divinity of his position and also appeals to pathos. Religion during this time was present in the lives of those who were being oppressed and were not being given their most basic rights. King was a minister who believed that the union that we are in with God should supersede any unjust laws that we feel are oppressive of our rights. He says, “Human progress never rolls in on wheels of inevitability; it comes through the tireless efforts of men willing to be co-workers with God, and without his hard work, time itself becomes an ally of the forces of social stagnation.” (212).

Here, King is claiming that we need to have faith in life and in the decisions we make. If anything is to be done about the conditions we are in, it is to be done through God and all that he does for us. Therefore, we must go through God in order to get the basic rights that we are worthy of. Also, by referencing Jesus a number of times in “Letter,” King appeals to pathos because it relates the most important person in many people’s religions and shows how he was a peaceful negotiator. This gave stability to the non-violent approach of the Civil Rights Movement.

The use of rhetorical questions throughout King’s “Letter” are included to make the readers think about the reality of their situation. This simple method is very useful in this literary work because their location help to convey the seriousness of the situation to the reader. He supports his claim by saying, “Are you able to accept blows without retaliating?” (205). He uses many rhetorical questions like this to help make the reader think about the reality of the situation they are in. The use of this rhetorical strategy is very effective because it reveals an inevitable truth to the reader that must be interpreted by them. King explains his main concepts very clearly to help extend his position to the clergymen and make them understand his claims.

In conclusion, King’s use of rhetorical questions, historical and biblical allusions, and appeal to pathos help him to amplify the seriousness of the oppression of his people. His rhetorical strategies used were very effective to the clergymen and many others who have had the opportunity to read it. It helps King directly state his argument so that his position is clearly stated and understood throughout the entirety of the essay. He uses very eloquent diction and rhetorical strategies to tie his main ideas together and give him strong areas of support.

Without the use of these strategies and many more found in the letter, King’s argument may not have been as strong as it is. By giving us specific examples of just and unjust, combined with the power of his diction, King is able to convey a powerful message about what he believes in. His historical and biblical allusions appeal to pathos and ethos by giving strong support to the examples that he had previously mentioned. So, we must understand and take note of King’s diction in order to prevent any human laws from coming into conflict with higher laws, we need to abolish those unjust laws and only follow those basic human laws given to us a birth. 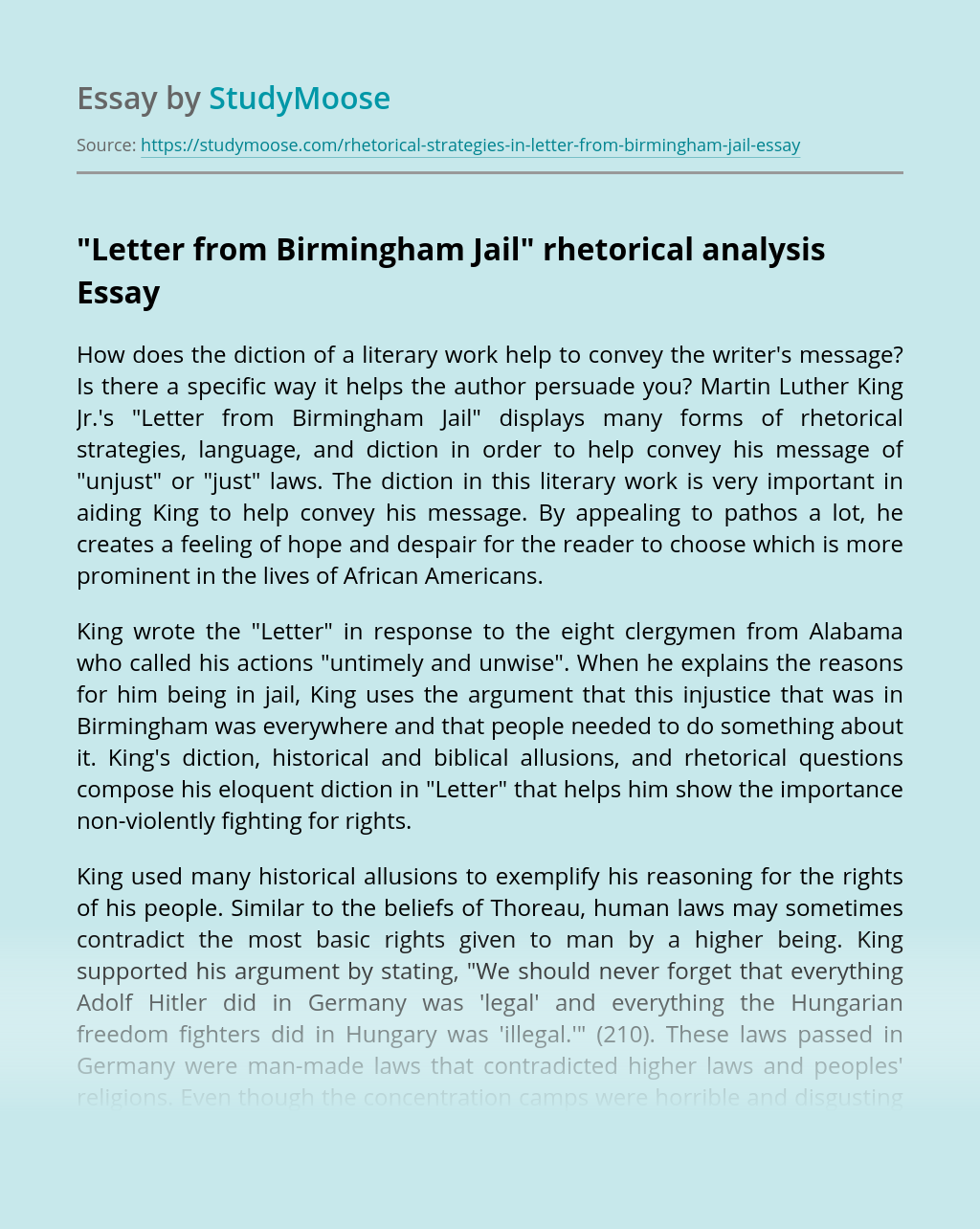 Turn in your highest-quality paper
Get a qualified writer to help you with
“ “Letter from Birmingham Jail” rhetorical analysis ”
Get high-quality paper
Helping students since 2015
Stay Safe, Stay Original