Thomas Jefferson and Martin Luther King, Jr. were brilliant men. The Declaration of Independence, written primarily by Jefferson, and the Letter From Birmingham Jail, written by King, are perfect examples of their intellect. Looking at these documents and observing the tactics they use while attempting to move their audience toward their ultimate goal, one can see the finesse that both Jefferson and King possessed. The Declaration of Independence had aspirations of obtaining a new form of government, away from the King of England, while the Letter From Birmingham Jail was intended to help move America toward a desegregated future.

Jefferson was charged with moving the Colonists to armed revolution, as well as not alienating the King of England and his powerful allies.

King’s priority, in the Letter From Birmingham Jail, was addressing the clergymen, who were primarily responsible for his jailing, but he was also attempting to draw the black community and, on a smaller scale, the white community, into the Civil Rights Movement.

Many similar factors dictated how Jefferson and King attempted to move their respective audiences, including emotional and logical appeal, as well as appeals to authority, however; the extent to which each used specific strategies varied drastically: Jefferson was concise and cleverly subtle with his aim toward different parts of his audience, while King was very detailed and forthright with all of his audiences.

In retrospect it is not inane to say that both Jefferson and King were excellent and effective rhetors, however; in their time they were both quite audacious in their endeavors.

Jefferson was committing treason, a crime punishable by death, and he was asking his fellow countrymen to do the same. Similarly, King was asking people to follow him in breaking the law, taking the risk of going to jail or tolerating physical and verbal abuse. This, obviously, was not a simple task, but each was profoundly committed to their cause, and they never fell short of giving good reason for their strife. Both Jefferson and King used a significant amount of emotional and logical appeal, not necessarily to make their audience aware of their stance, but to sway them to feel the same and to take action. The style in which the Declaration of Independence was written was very formal and proper, and the emotional appeals are undertone to the logical facts that are stated about the tyrannical King of England.

While the statement “He has…sent hither Swarms of Officers to harass our People, and eat out their substance” was most likely meant to strike emotion in the colonists, it was stated in a very particular manner, which gave it a more logical appeal when read by one whom was not living in the colonies at that time. All of the statements made about the King placed strong emphasis on the fact that “HE” was the one responsible for these terrible acts on the colonies, and each statement was precisely constructed to appeal to different audiences in a different way. On the other hand, Dr. King is very direct when using emotional appeal.

He used his greeting skillfully to disarm the clergymen who were responsible for his presence in jail, and then, to further build his character in their eyes, he says, “I feel that you are men of genuine good will and that your criticisms are sincerely set forth.” As he progresses through the letter and shifts toward different audiences he uses emotional appeal accordingly. The 14th paragraph of his Letter From Birmingham Jail is almost entirely devoted to calamitous situations that a common black family endured in his day. This was done to make the white audience aware of a black man’s point of view, but also it was meant to hit home with the black community and, in turn, incite more of them to stand up against the everyday injustices.

In addition to emotional and logical appeals, both Thomas Jefferson and Dr. King demonstrate their credibility with the use of appeals to authority via the use of religious or historical figures in their rhetoric. This particularly holds true for King, but Jefferson does mention “Nature’s God” and “Creator” in the course of his writing. To say that men are “endowed by their Creator with certain unalienable rights” was a bold assumption for Jefferson to make, considering that at that time the residents of the Thirteen Colonies were Puritans. Even though he was already a well-respected man, he used this approach to establish his credibility, since at that time there was no separation of church and state.

Martin Luther King, Jr. took this technique one step further by including biblical and historical references throughout his speech. He compared his quest to those of the Apostle Paul and Socrates, he compared his civil disobedience to that of the early Christians who were willing to face excruciating pain before they would submit to injustice, and he compared the label of ‘extremist,’ given to him by the clergymen, to the “extremist” views of Martin Luther, Thomas Jefferson, and even Jesus Christ. Dr. King uses this type of appeal more than twenty times in this dissertation to make the readers aware of his extensive education. By making his audience aware of his intelligence, he thereby makes himself more credible.

While, on the surface, the Declaration of Independence and the Letter From Birmingham Jail had completely different purposes, they were connected on a deeper level. The strategies used by Thomas Jefferson and Martin Luther King, Jr. were similar because they were essentially fighting for the same cause: freedom. Jefferson was fighting for the freedom of the American colonists, and King was fighting for the freedom of African Americans. Each is very eloquent, and while they use many of the same tactics, including emotional, logical, and authoritative appeals, the extent to which they use them differs. While King was very in depth and direct with all of his audience, Jefferson was concise and subtle with his intentions toward the varying parts of his audience. 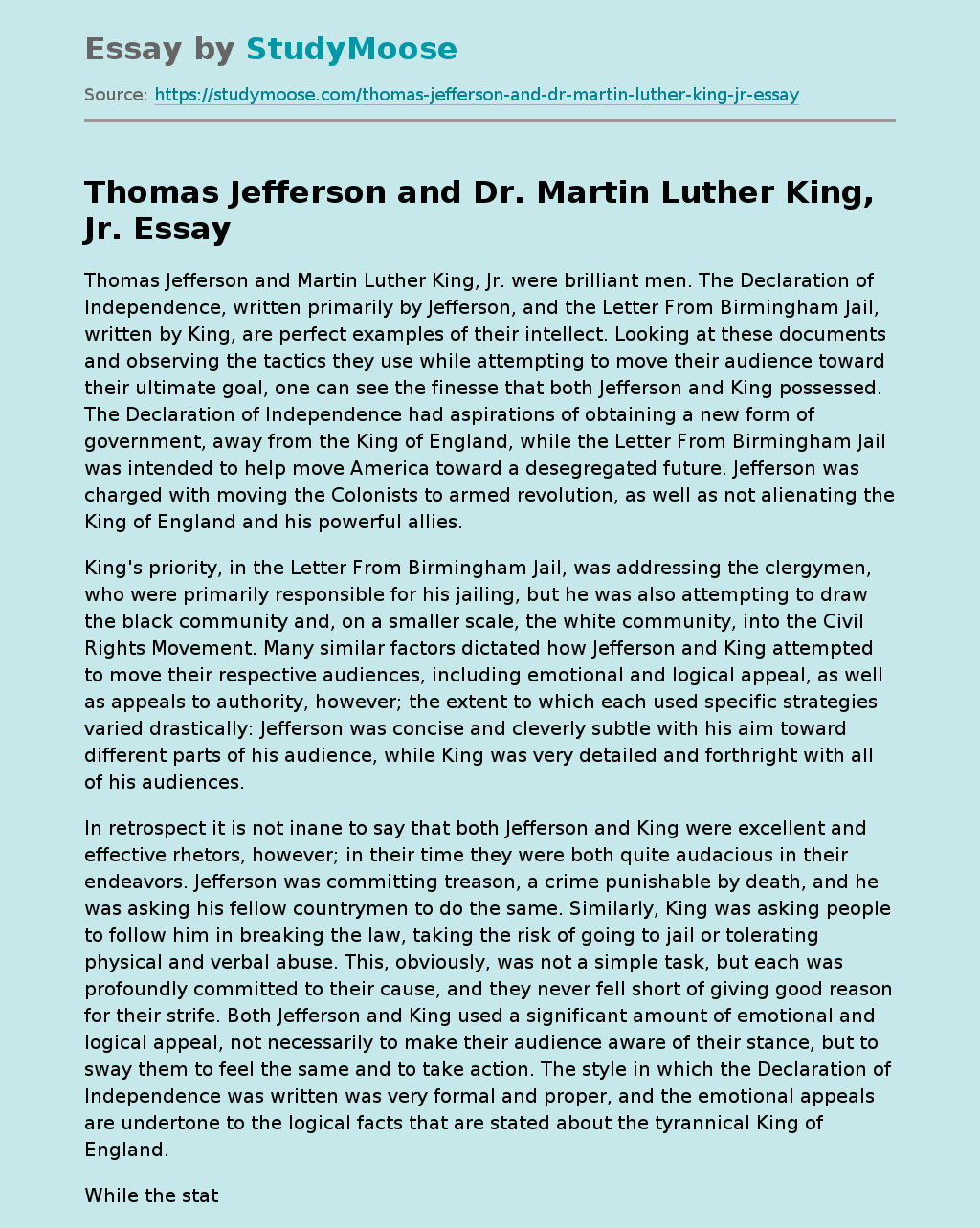