Both Martin Luther King, Jr. and Aung San Suu Kyi were peacefully resistant social activists who used their views and outlooks on how life should be to change the world around them. While Aung San Suu Kyi lived in Burma and fought for a democracy in her country, Martin Luther King, Jr. fought for equal rights in America. During the movements they were leading and participating in, both Suu Kyi and King wrote exceptionally touching writings that are still seen as huge pieces of history today.

Their writings touched people by showing them how extremely flawed their societies really were. During Martin Luther King, Jr.’s time in jail, he wrote a letter that is titled, “The Letter from Birmingham City Jail,” which explained that he was in Birmingham Jail because injustice was there, and he tells about how there should not be segregation. By contrast, in Aung San Suu Kyi’s writing, “In Quest of Democracy,” she wrote about her views on democracy and her efforts to create one.

They both wanted equality and more rights through non-violent means, and the way they wrote about those desires for justice was stirring to their people because each told familiar stories that related to personal experiences that their people had. Throughout all of King’s anti-segregation efforts, he was the head of many movements that impacted thousands. For instance, King was involved in the Montgomery Bus Boycott, Albany Movement, Birmingham Campaign, March on Washington, the Chicago Housing Movement, and a few others.

While King was in jail, he wrote a letter addressing the wrong things that were done to him and how he thought it was unjust. In his letter he wrote, “Injustice anywhere is a threat to justice everywhere” (204). By saying this, he showed that the reason he was in Birmingham fighting for civil rights was because equal rights has to start somewhere, and once it starts, it will spread. Martin Luther King, Jr. shows how the States are hypocritical because they claim, “The goal of America is freedom,” but yet they are being governed by Jim Crow Laws (215).

King used the power of words and non-violent resistance to start a movement that changed the world. Aung San Suu Kyi was a woman that lived in Burma, and after she studied abroad for a while, she returned to see how isolated her country was. She then made efforts to speak out against her dictator, U Ne Win, and start a movement toward a democracy and human rights. When Suu Kyi’s efforts started reaching other people and a movement was started, she was put under house arrest and all ties to the outside world were cut off. Aung San Suu Kyi wrote the piece, “In Quest of Democracy” to try to spread her efforts to make Burma a democracy. Suu Kyi explains how the government is at fault for a country’s despairs by saying, “The root of a nation’s misfortunes has to be sought in the moral failings of the government” (221). Suu Kyi also used her religion to help spread her movement of a democracy.

For example, she use non-violence, which is the eighth of The Ten Duties of Kings. Finally, since Aung San Suu Kyi was put under house arrest, her movement ended with her isolation. Next, Aung San Suu Kyi and Martin Luther King Jr. were able to express their beliefs non-violently in their countries. Throughout both of their lives they followed Gandhi’s non-violence movement. While King stated, “Nonviolent campaigns aimed at ending racial segregation across the South” (202), Suu Kyi also “peacefully used democracy to reverse the process of decline” (222).

While Christian was the main religion in America, Buddhism was the main religion in Burma. King and Suu Kyi used allusions to the scriptures of their religions to touch their people. Both King and Suu Kyi were extremely passionate about their movements and were determined to do anything they had to in order to reach their goals. Suu Kyi explains how, “In Burma, distanced by several decades of isolationism from political and intellectual developments in the outside world”. (220) Finally, they both had similar morals in the fact that they wanted equal rights for all humanity even though Suu Kyi was on house arrest and King was suppressed from being a different ethnicity.

All in all, Martin Luther King, Jr. and Aung San Suu Kyi were social activists who created movements from their own views that changed many peoples’ lives. Both supported and acted in a non-violent way. Therefore, Aung San Suu Kyi fought against the dictator of her country in order to form a democracy, and Martin Luther King, Jr. fought for anti-segregation, so that all Americans, no matter what ethnicity, would be treated equally. Each of them showed the people of their country how flawed their nation was by writing pieces while imprisoned for committing no crime. For instance, in Amnesty International, it stated “She had committed no crime” (Amnesty International) describing how Suu Kyi was imprisoned for doing nothing wrong. Finally, both Aung San Suu Kyi and Martin Luther King, Jr. were persistent activists who aspired and conquered their goals and ambitions to the best of their ability. 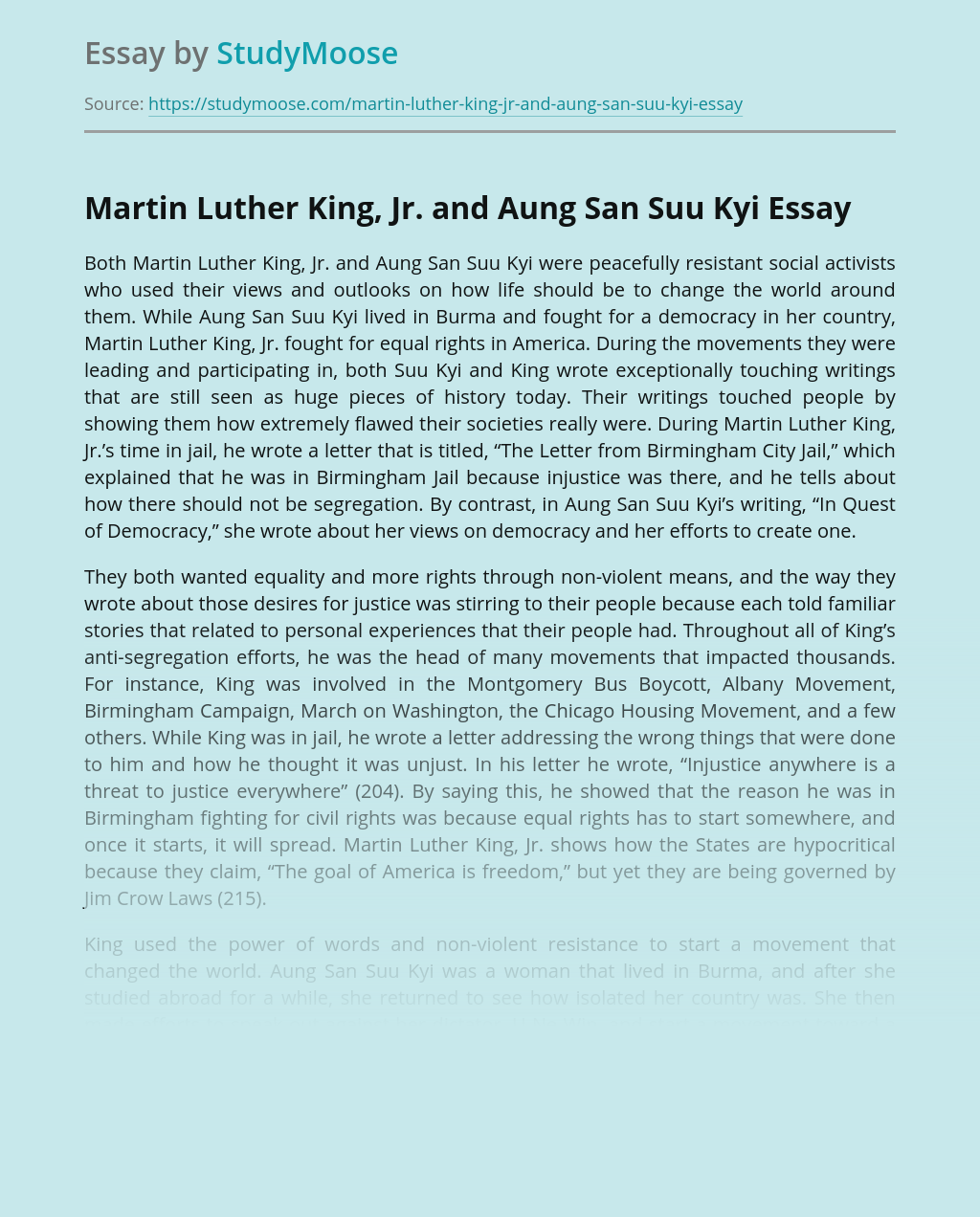