Patrick Henry and Martin Luther King Jr. were two of the most influential revolutionary’s known to mankind. Even though their views on how to become liberated were completely opposite, their passion and unrelenting determination eventually proved to be rewarding. Patrick Henry and Martin Luther King Jr. are as the sun and water fighting for the same withering blossom but with different methods to success.

Patrick Henry had an intense, win big or lose big approach to freedom. In his speech he is pleading to the president to open his eyes and notice that everything is not apt.

Henry was telling the president there was no peaceful means of settling this dispute with Great Britain. They tried to solve their differences by talking for ten years, Henry said, but to no avail. According to Henry, there was nothing left to do but fight for their freedoms. He said,” If we wish to be free-if we mean to preserve inviolate those inestimable privileges for which we have been so long contending-if we mean not basely to abandon the noble struggle in which we have been so long engaged, and which we have pledged ourselves never to abandon until the glorious object of our contest shall be obtained, we must fight! I repeat it, sir, we must fight!”.

He yearned for freedom so desperately he was willing to die for it. “Give me liberty, or give me death”.

Martin Luther King Jr. was just as ardent for freedom as Patrick Henry was, but his approach was different.

He devised a more passive plan to lift his oppression. He was very unwavering in his non-violent beliefs. His philosophy was that violence only brings momentary results. Violence only starts a circle of endless chaos. He believed you must offset hatred with love. In order to progress something has to be gained. When violence is present nothing is gained, therefore, in order to progress you will need to use non-violent tactics.

Patrick and Martin had many differences. They have different policies in which they followed to overcome cruelty. They also had different types of oppression. Martin was dealing with racial issue and Patrick was dealing with governmental issues. Martin was a peaceful, non-violent problem solver and Patrick wasn’t getting any results being nonviolent so he became violent. These two men also have some things in common. They both had a strong belief in God. They both had been under heavy subjugation. They both fought the oppressor, although with different means of force, both were successful.

These two great men help shape our country in to what it is today. Whether by violence or non-violent acts both overcame the harsh realities of life. Without their sacrifices where would we as a people be today? 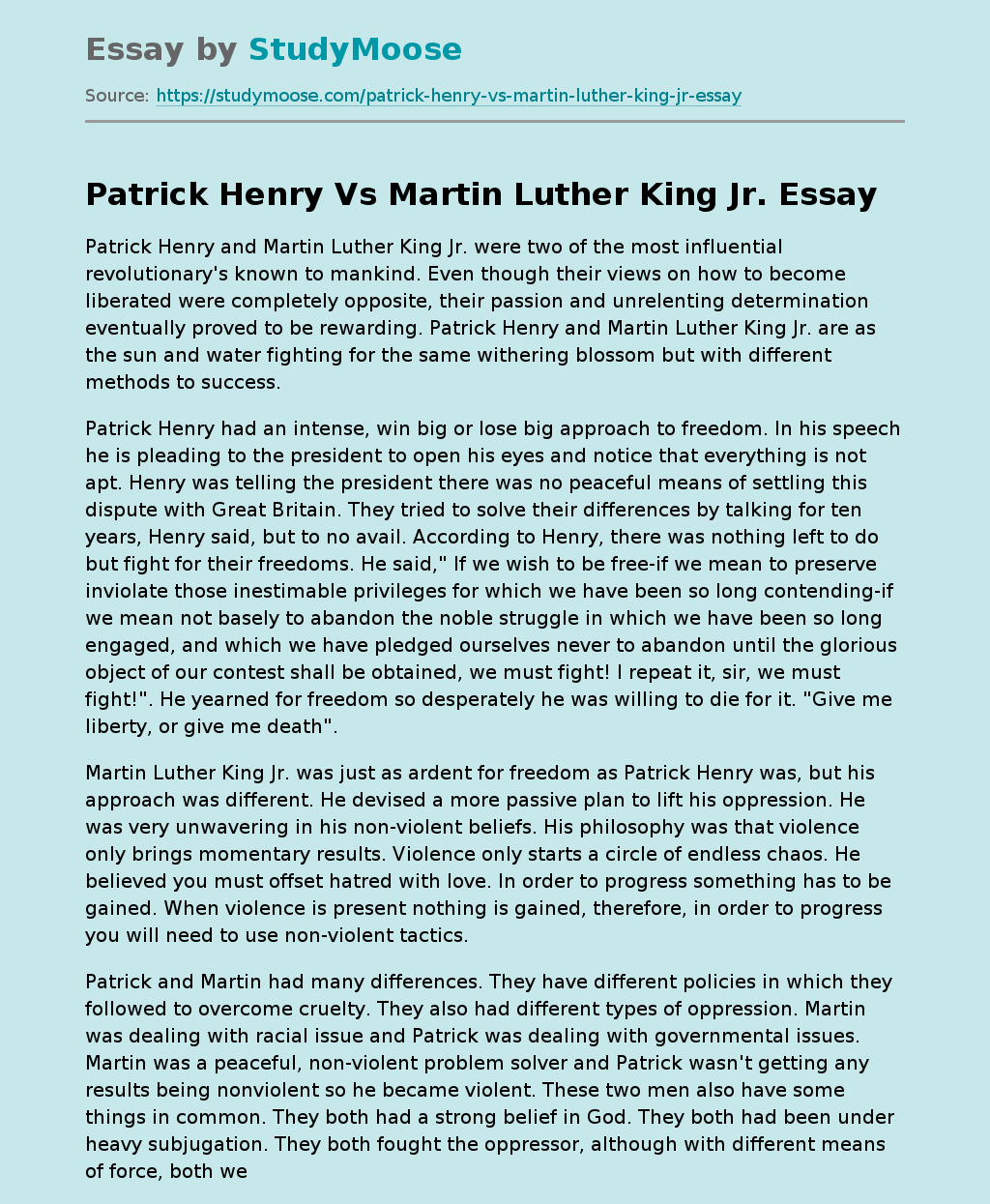