Don’t waste time
Get a verified writer to help you with US History DBQ Essay: New England and Chesapeake
Hire verified writer
$35.80 for a 2-page paper

Puritans fleeing religious persecution in England settled in New England. They were a highly religious group of people. The Englanders who saw the opportunity to take advantage of the popularity of tobacco they had discovered settled the Chesapeake area. These “gold diggers” were mainly coming to the New World to create a large profit.

These colonists were not fleeing England seeking religious or social freedom, but evidently only to gain prosperity. The New England settlers were longing to find a more appropriate land of opportunity where they could improve their lives and gain religious freedom. They basically wanted to create a society where they could focus on their families, religion and education. Where as the Chesapeake settlers, they were obviously encouraged to the riches in the New World. In New England, Puritan values created close- knit communities (congregationalism). In these communities, schools were established and trade flourished in contrast with the south.

Also, New England was founded by families, not single men looking to get rich quick (influenced societal values.)In Governor John Winthrop’s, A Model of Christian Charity, he states that their goal was to form “a city upon a hill”, which represented how the Puritans wanted to create a colony that would be a model for all the world to see and follow. John Winthrop used words from the Bible to describe their colony as “a city upon a hill.” In many ways their dream came true. Massachusetts Bay Colony had began with about 700 people in 1630.

Ten years later, the population had grown to over 20,000. Massachusetts Bay had one of the largest populations of any European colony in North America at that time. And despite differences in social status, or power, John Winthrop wanted the people to be knit together. They were very close-knit people, they traveled as big families and from time to time as communities. [Doc B] In contrast, Immigrants destined for Virginia were traveling not as families, but were grouped as men and woman. [Doc c] In the Articles of Agreement in Springfield Massachusetts 1636, it is shown their towns were very planned out with everyone having a share of the meadow whether rich, or poor.

Another key factor in the differences between the north and the south was how the northerners stood firm to their belief that every man shall be equal and no one should be enslaved, while the southerners in the Chesapeake area strongly believed in the use of slavery. The tobacco industry required extensive labor which initially was not available. To solve the labor shortage issue, various methods were attempted. One of them were indentured servitude, the headright system, and slavery. Indentured servants would work on the plantations for about four-seven years in return for land. At the end of there work period, they were gained their freedom and either worked for wages or obtained land of their own to farm. The headright system was a method used to attract people to Virginia which were offered 50 acres of land to each immigrant who paid for their own passage to the Americas. Slavery was different from indentured servants in that they had no end to their work. Labor wasn’t much needed in the north due to land differences. Due to swampy land in much of the area, towns were not part of the landscape or lifestyle as they were in the north.

Two established churches were enacted in 1775, the Anglican and the Congregational. The Church of England, Anglicans, became the official faith in Georgia, North and South Carolina, Virginia, Maryland, and a part of New York. The College of William and Mary was founded in 1693 to train a better class of clerics for the Anglican Church. The Congregational Church had grown out of the Puritan Church, and was formally established in all the New England colonies except independent minded Rhode Island. Presbyterianism was never made official in any of the colonies. Religious toleration had made tremendous strides in America. There were fewer Catholics in America; hence anti-Catholic laws were less severe and less strictly enforced. In general, people could worship or not worship as satisfied.

Education was important to the Puritans who believed that people should be able to read the Bible. The Puritans built schools that were free to all the children of the community. Free education was unheard of in Europe at that time. Geography of the Southern colonies differed as well. In the early 1700s, agriculture was the major way of life in the English colonies. The hot, humid climate and good soil of the South was well suited to growing crops. They grew and exported tobacco, rice, and indigo to England. In the rocky soil of New England, farmers barely grew enough crops to fee themselves. As a result, many New Englanders turned to the thick forests or the sea to make a living. Waters off the coast of Massachusetts were among the richest fishing areas in the world. In the north the population of enslaved people remained small. Most farms in New England weren’t very large. Without a lot of land, farmers did not use many workers to run their farms. In the south, small farms and plantations made up the largest part of the Southern Colonies’ economy. Planters brought Africans to send important cash crops, such as tobacco, and rice.

Different causes lead to different effects. These two regions of the New England colonies and the Chesapeake region did in fact share the common truth that their settlers were all of English origin. Of course when they first set sail, even before they reached the New World, they began to separate into two distinctly different societies already. The clearly evident reason is because these “pilgrims” came to the New World each pursuing something different. The New England settlers were longing to find a more suitable life style and free religious persecution. However, the Chesapeake settlers, they were clearly hoping to “strike gold” in the New World. Clearly religious backgrounds played a crucial role in the diversity of New England and the Chesapeake region. 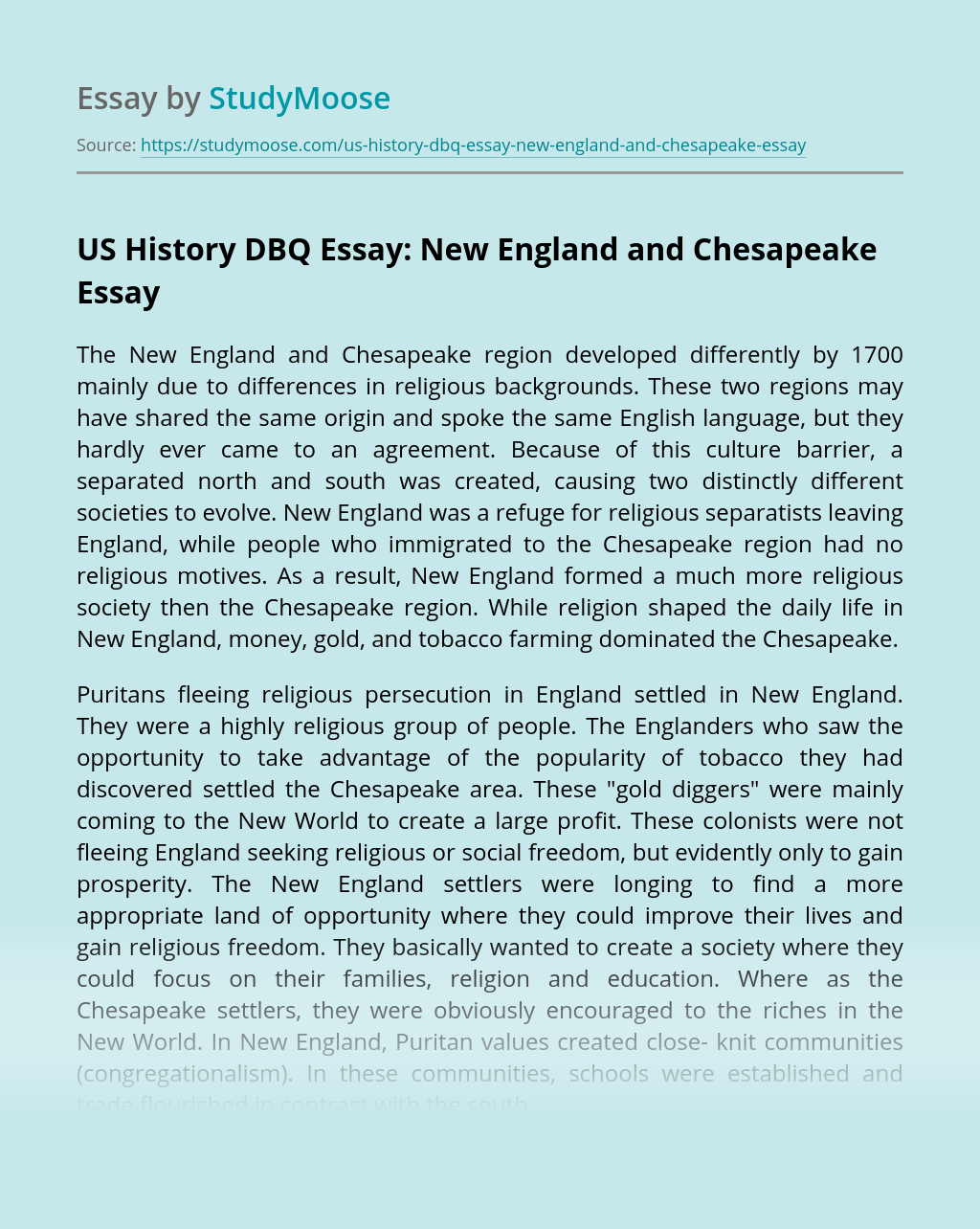 Don’t waste time
Get a verified writer to help you with US History DBQ Essay: New England and Chesapeake
Hire verified writer
$35.80 for a 2-page paper
Stay Safe, Stay Original