A Comparison between New England Colony and Chesapeake Bay Colony

In 1607 the first British colony was founded in North America and settled in Maryland and Virginia. This colony, known as the Chesapeake Bay colony, was colonized and settled by the English men of Anglican Church beliefs. Later in 1630 a wave of English men, women and children settled in the areas of Main, Massachusetts, New Hampshire, Rhode Island, Connecticut and Vermont who were all believers of Puritanism. This colony was named the New England colony.

Differences in Population between Two Colonies

In spite of both colonies being settled by men, women and children of English ancestry by the 1700’s both regions evolved into two very distinct societies.

Don't use plagiarized sources. Get your custom essay on
“ A Comparison between New England Colony and Chesapeake Bay Colony ”
Get custom paper
NEW! smart matching with writer

New England had elected officials to represent the people.

This formed the council who had regularly scheduled town meetings to voice the concerns of the people. In comparison because New England was densely populated by those of Puritan beliefs religious tolerance was non existent. This major difference on both colonies political ideologies encouraged the development of two completely different societies.

The economies of these two regions also aided in the enlargement of two separate societies. The Chesapeake Bay colonies sole purpose was money. The original settlers were sent by the crown in order to make a profit. Chesapeake Bay’s whole economic nourishment was Tobacco.

Tobacco was brought by John Rolfe who snuck in Tobacco seeds from the Spanish. Other than tobacco Chesapeake Bay contained many plantations and made their profits from cotton as well. New England was a multi crop economy. They planted more vegetables. This alleviated New England from having any food shortage conflicts. This encouraged the separation of the Chesapeake Bay and the New England colony.

As mentioned before the settlers of the Chesapeake Bay area were mostly those who followed the Anglican church. Whilst the majority of New England were Puritans. As previously cited Puritans were unaccepting of any other religion as they believed their religion was the only precise form of belief. Also due to the Maryland Act of Religious Synopsis other Christian sects were allowed the opportunity to practice their beliefs. This was a very distinct difference that lead to the two colonies to become separate associations.

Social roles also played a major role in the difference of both colonies. Mentioned before was the fact that mostly investors, who were dominantly men, settled in Chesapeake Bay. The settlers of New England came in families. Those who came in families were able to build communities, establish a structured government and flourish and grow as a society. Thus showing that Chesapeake Bay was a place for business while New England was a place to live and make a life. This is a clear cut aberration as to why the two colonies partitioned.

A Comparison between New England Colony and Chesapeake Bay Colony. (2016, May 14). Retrieved from https://studymoose.com/a-comparison-between-new-england-colony-and-chesapeake-bay-colony-essay 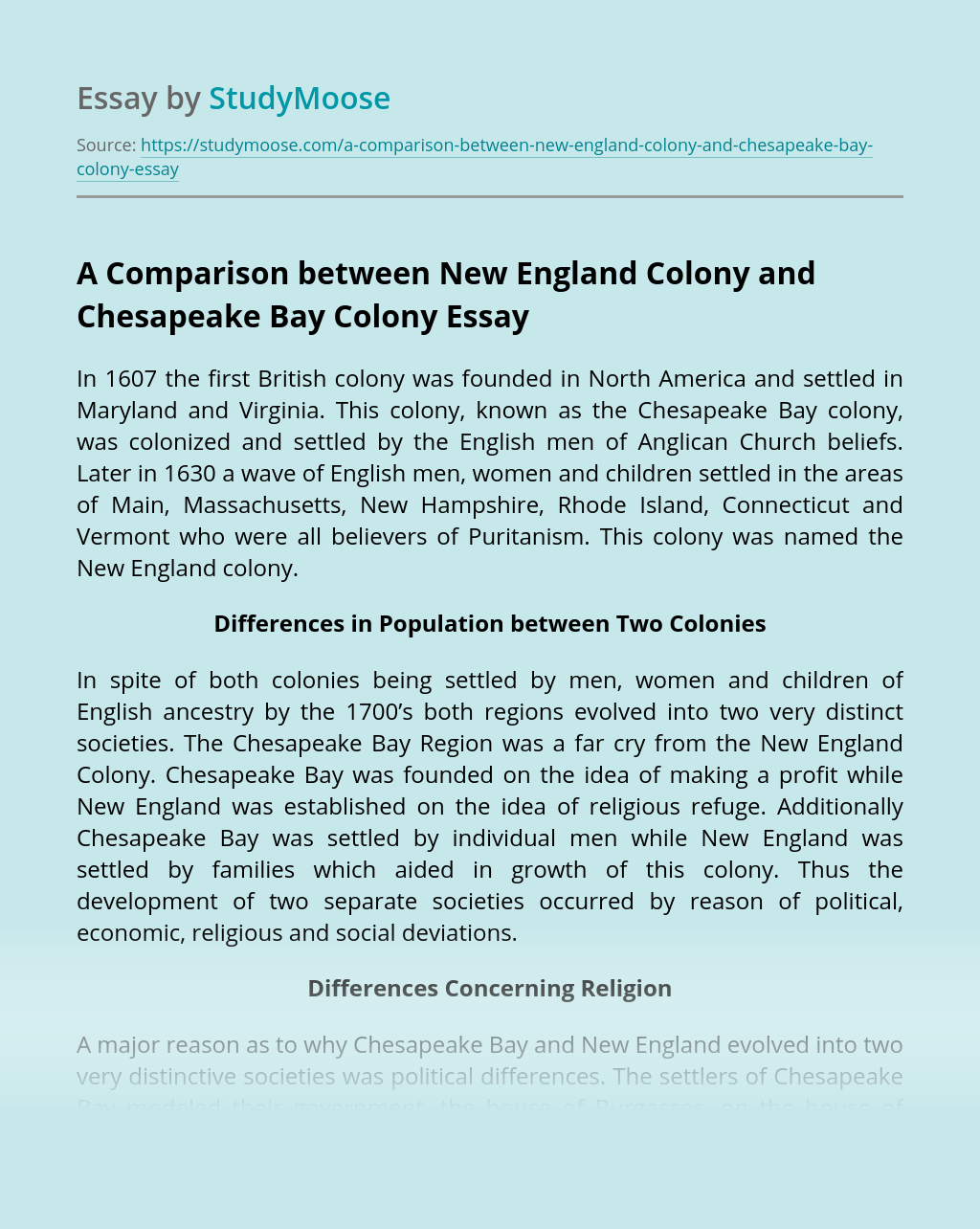