On January 11, 1991, William Kolander, president of the New England Soup Company of Boston, Massachusetts, was reviewing a research report he had received from a Boston-based research house. The report presented the findings of a study on the firm’s new formulation of Kolander’s Chowder brand of canned soup. The study had also been sent to the firm’s sales manager, Kirk George, and the production manager, Edward Corey. A meeting was scheduled for January 12 with the research firm and the New England Soup Company management.

Turn in your highest-quality paper
Get a qualified writer to help you with
“ New England Soup Company: Business Overview ”
Get high-quality paper
NEW! AI matching with writer

The purpose of the meeting was to discuss the research findings and to make decisions concerning Kolander’s product offerings.

The Company
The New England Soup Company was a small firm that produced and distributed a line of specialty canned soup products to both the institutional and retail markets. Approximately 62 percent of their 1990 sales volume went to the institutional market ($68,526), and 38 percent went to the retail market ($42,102). The company was founded by William Kolander in 1957.

Kolander’s father was a successful owner of several restaurants in the Boston area that were famous for their chowder. The young Kolander convinced his father in 1956 that there was a market to sell the chowder to local institutions (restaurants, hospitals, etc.) in the New England area, and he developed a canned chowder under his father’s supervision. Production facilities were acquired in the same year.

After losses in the first few years, the business turned profitable in 1960. At this time, Kolander decided to enter the retail market with Kolander’s Chowder brand.

Both the institutional and retail business grew rapidly during the 1960’s, as did the firm’s profitability. Expanded production facilities were built in 1968, and two additional specialty soup lines were introduced in 1970. These lines experienced limited success at retail but were reasonably profitable in the institutional market.

Current Situation
The last five years had been a period of level and then declining sales for Kolander’s Chowder (1987 -6943 cases, 1988 — 5676 cases, 1989 — 5101 cases, and 19901 — 4900 cases). Kolander attributed this decline in sales to the market entry of two new canned chowders in 1986 and 1987 (see Appendix A). The new competitors were Fisherman’s Delight Chowder and Cape Cod Chowder. Both brands were produced locally and appeared very similar in formulation to Kolander’s Chowder. Both of the new competitors had entered the market with a somewhat lower selling price than the Kolander’s brand. Distributors were also attracted by the slightly higher margins plus the desire to carry a competitive alternative to Kolander’s Chowder. Several large retailers had advertised the Fisherman’s Delight brand as a “weekly special” at 43 cents per can.

Management Objective
Kolander recognized that the firm faced a serious competitive threat from the two new brand entries. While there were several long-term issues he was considering, his immediate concern was one of developing a competitive strategy to counter the sales decline of Kolander’s Chowder. Specifically, he wanted to recover the lost distribution of the brand and switch customers from competitive brands back to the Kolander’s brand. This was to be accomplished within the next 12 months. While increased distribution outside the current market area was a possibility, Kolander’s immediate objective was to improve the market position of Kolander’s Chowder at retail within the New England are.

The Research Project
In October 1989, Kolander contacted a local research firm. After a number of meetings, the research firm recommended that a series of group interviews be conducted with current users of the two competitive chowder brands in order to explore reasons for the product usage, reactions to the brands, and perceived product differences. Through group sessions of this nature, the research firm believed that the cause of declining sales of Kolander’s Chowder could be established and potential solutions identified. The results of the group sessions suggested that an important proportion of the competitive canned chowder users preferred a chowder that was thicker and creamier than the current Kolander’s Chowder brand formulation. Of the former Kowlander’s Chowder users, the desire for a creamier formulation was the predominant reason for switching. Many of these chowder users had switched to either Fisherman’s Delight or Cape Cod Chowder.

Based on these findings, the research firm recommended that further research be conducted to evaluate changing Kolander’s Chowder to a creamier formulation. For purposes of the test, it was recommended that two creamier formulations be developed, a “creamy” version and an “extra creamy” version. These two new formulations would be evaluated in a taste test along with Kolander’s current chowder plus the two competitive brands.

After several meetings on specific aspects of the proposed research design, Kolander decided to approve the project. Appendix B presents the results of this study.

Case Question
Focusing on the retail market, what product line does the research suggest Kolander should produce? Guidelines for 3-Slide Submission
Slide 1: Analyze the data in Table 1 and make a product line recommendation Slide 2: Evaluate the focus group and the taste test and judge the quality of data from each Slide 3: What would you have done differently if you had guided the research process for this problem?

Research Design and Procedure
Two hundred male (n=100) and female (n=100) canned chowder users were selected from four geographic locations representative of the New England market area. The subjects were selected using a probability sampling procedure involving a telephone-administered qualifying questionnaire. Each subject was paid $5 for participating in the test.

The subjects came to one of four test locations (local churches). They were tested individually in 30-minute sessions. Subjects were brought into the testing room and seated at stalls. An instruction sheet explained that the subject was to evaluate several samples of chowder, that the test would consist of three parts, and that they would be required to taste a total of 15 cups of chowder. Normal taste-testing procedures were followed.

The first part involved tasting five samples of chowder and ranking them from “most preferred” to “least preferred”. The five chowders were Kolander’s regular chowder, Fisherman’s Delight, Kolander’s creamy (version 1), Cape Cod, and Kolander’s extra creamy (version 2). The second and third parts of the test involved tasting five samples again. The samples had different code letters and the subjects were not told the samples were identical to the previous five. After tasting the five samples, the subjects were again asked to rank order the five samples. For each subject, the test procedure resulted in three preference orderings of the five chowder samples. The preference orderings were combined to form a composite ordering for each subject, a procedure that resulted in a more reliable measure of each subject’s true preference ordering.

The data set was analyzed by calculating the average rank order of each chowder and scaling the chowders on a five-point scale ranging from most preferred (1) to least preferred (5). Table 2 presents the results of this analysis. 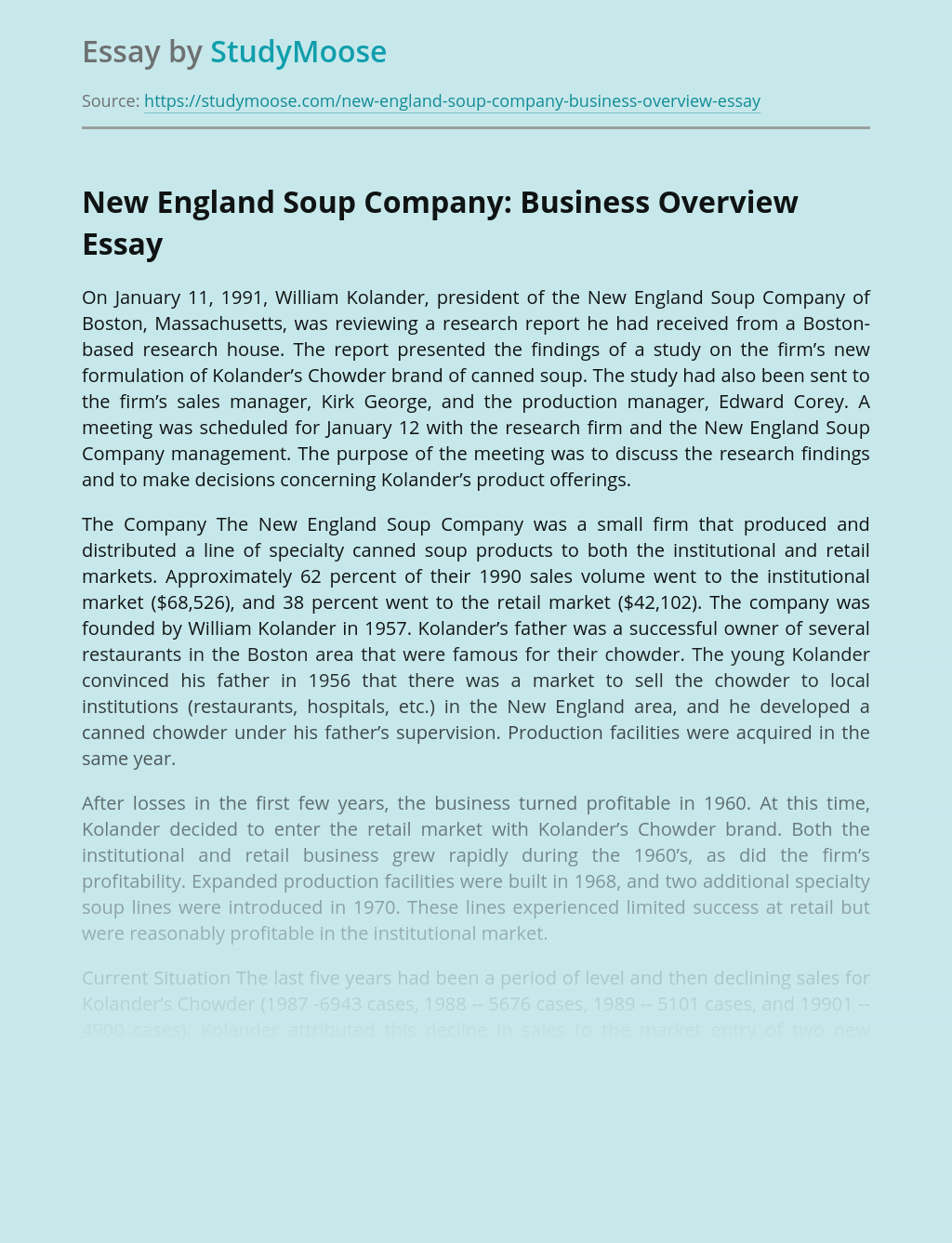 Turn in your highest-quality paper
Get a qualified writer to help you with
“ New England Soup Company: Business Overview ”
Get high-quality paper
Helping students since 2015
Stay Safe, Stay Original