Volunteering in a Soup Kitchen

On Thursday, May 27th, I volunteered at the United Methodist soup kitchen to prepare them for the meal they would serve later that evening. I thoroughly enjoyed the experience not only because it was a great cause but also, the feeling you get from helping those less fortunate is a great sensation. I had volunteered there in the past serving in the evening so I wanted to help out earlier as to gain a new experience. A lot of the work that I did was prepping for the evening service.

Turn in your highest-quality paper
Get a qualified writer to help you with
“ Volunteering in a Soup Kitchen ”
Get high-quality paper
NEW! AI matching with writers

I cut onions, bread, and set up the tables and dessert trays. It was nice to have other people there to talk with. Many of which have helped out there before. The fellow who is in charge of the meals and soup kitchen is also humorous and also has a lot of food facts to share.

It was nice to meet someone who really enjoyed what he was doing and was also knowledgeable.

Overall, I thought that this was a great opportunity to get involved with the community and also something that happens many times a week so it would be easy to make a habit out of it.

It is also a great example of how a little help goes a long way when you approach it as an opportunity rather than forced charity work. The soup kitchen is a great cause to help with that allows you to help many people that need it and may also be a great way to meet other people who are interested in helping the community.

I woke up half-consciously at 6:30 A.M. to the sound of my alarm. Thinking that the alarm was set to the wrong day, I went right back to sleep. After few minutes, I suddenly remembered that I had signed up to volunteer at the Fishes and Loaves soup kitchen in Santa Ana, California. Heading down to the soup kitchen, I was half angry that I had to wake up early on a Saturday morning. When I arrived there, everyone was preparing for the day. The soup kitchen volunteers were divided into groups. One group of volunteers was preparing the food while the other was setting up tables. In the morning, donuts and coffee were served. In the afternoon, hamburgers were served with an assortment of foods. I was told that the people who came to the soup kitchen were mainly people who were down on their luck and just wanted a free meal.

I have to admit that coming from a middle class family, I was fairly well off and a little too sheltered. During my visit to soup kitchen, my view towards homeless people changed completely. Whenever I see homeless people on the streets, I always tried my best to ignore them. I used to think they were scary and dangerous. I hoped for a job that required minimum communication. To my surprise, my job was to carry food and serve refreshments and condiments in the soup kitchen. I was not familiar with their behavior or attitudes but I tried my best to be optimistic. Before people started arriving, I imagined drunks, people who were too lazy to work, and thieves. To my astonishment, the people were quite normal. None of them caused any violence or disturbance. They just came there to have a good meal and talk with their friends and family. Some of the people had small children and some even had shopping carts with their belongings.

I could not imagine a person being able to sustain life with so few resources. I was happy to spend my time helping them with their needs. My whole mentality changed and I felt that I have learned an important thing. There are so many people in this world lacking the fundamental resources that we are taken for granted. So, with my time and effort I felt that I could make their lives better. I met a man named Jose, who used to be a factory worker. Jose was wearing a gray jacket and a black baseball hat. His clothes were ripped and looked like they were going to fall apart. His face was wearied out from constant struggle to find enough resources. Because of the drastic decline in the economy, he lost his job. From then on, he could not find any other place to work. Understanding his situation made me realize my incorrect generalizations.

Everyone there was looking for a better life and was willing to work hard for it. At the end of our conversation, he gratefully thanked me, saying “Gracias”, for being a volunteer in the soup kitchen. From then on, I knew my time was used in a beneficial way. I cannot compare the soup kitchen experience to anything else I have ever done. I have never been in such a position where I can assist people and learn at the same time. Before coming to the soup kitchen, I used to think that helping homeless people on the street would not be any interest of mine. After the experience, I feel that I have found a part of myself. Now, I enjoy giving back to the community and helping all those who are in a truly desperate situation.

Being able to serve and help others is most rewarding. Volunteering in a soup kitchen has opened my eyes to what the real world really is. Most of the people who go to soup kitchens need everyday things that we sometimes take for granted like meals, showers, warm clothes, and someone who cares about us. It’s very rewarding to hear a warm “Thank you,” accompanied by a comforting smile because you have done something as simple as serving them a plate of food or a cup of lemon tea or orange juice.

It’s amazing that few requirements are necessary to work in a soup kitchen, yet the rewards are endless. The desire to serve and the virtue of caring about others and knowing that regardless of a person’s status, everyone is equal and should be treated that way, are the most appreciated and important qualities. The task of serving the food can be learned and perfected. Getting attached to the people you serve and work with is inevitable. It’s almost impossible to forget the children. While you are serving them juice, you wonder about their future, what will become of them? You often wonder if the older people have family members who are out there searching for them, and where they spend their days and nights.

Volunteering in a soup kitchen is not just another community service, it’s a reality check. You are welcomed into a world that, because of luck, is unfamiliar to you. In a soup kitchen you are helping both other people and yourself by giving their lives and yours a little more meaning.

Volunteering in a Soup Kitchen. (2016, Apr 23). Retrieved from http://studymoose.com/volunteering-in-a-soup-kitchen-essay 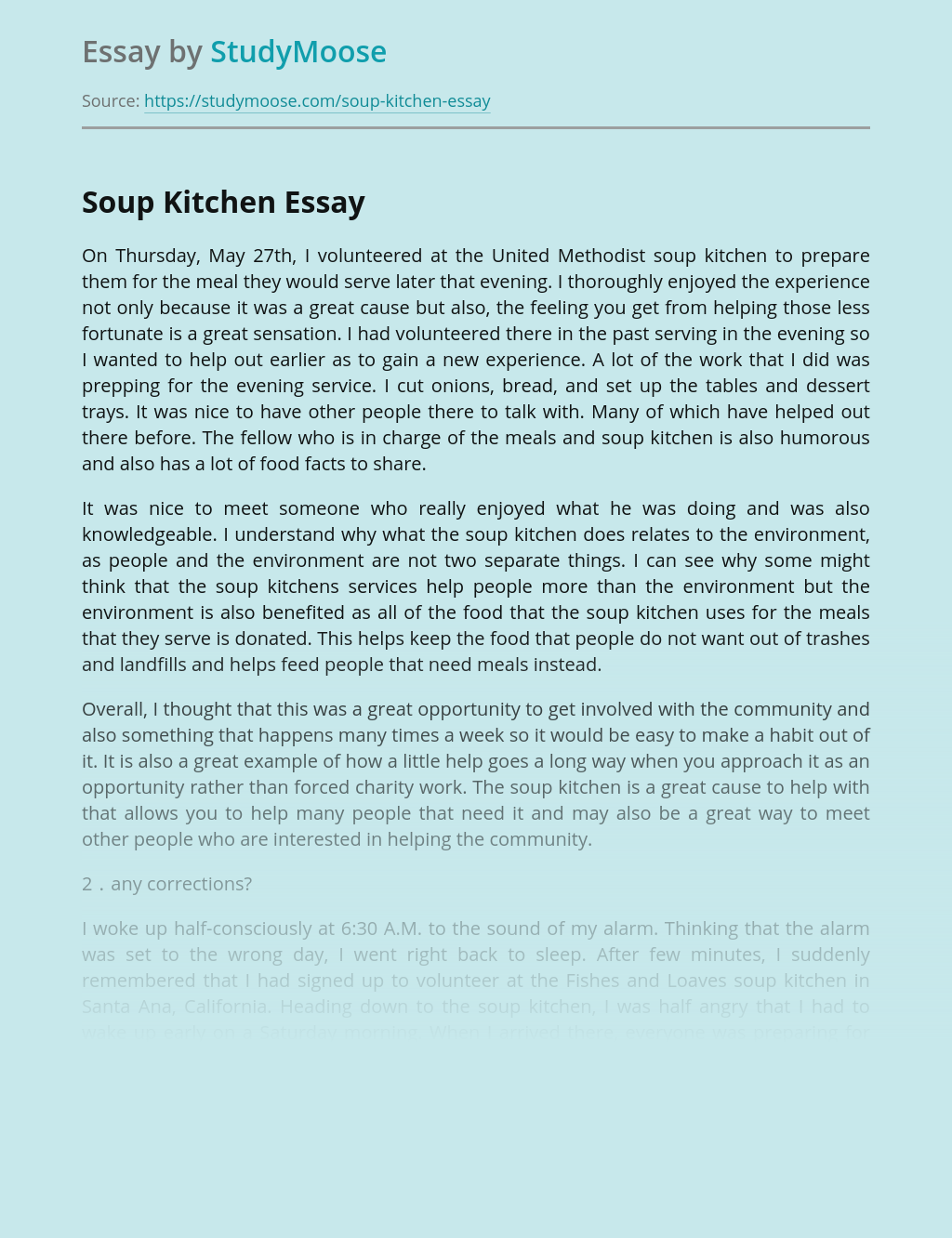 Turn in your highest-quality paper
Get a qualified writer to help you with
“ Volunteering in a Soup Kitchen ”
Get high-quality paper
Helping students since 2015
Stay Safe, Stay Original