Don't use plagiarized sources. Get your custom essay on
“ An Elephant Vanishes ”
Get custom paper
NEW! smart matching with writer

Her mother, Mama Elena, is unable to produce milk (due to shock at the recent death of her husband) and Mama Elena gives Tita almost immediately to the house cook, Nacha, who rears the child in the kitchen. Surrounded by the colours, smells, and routines of Nacha’s kitchen, Tita grows up understanding the world in terms of food. She enjoys her isolation in the domain of the kitchen. “Thanks to her unusual birth, Tita felt a deep love for the kitchen where she spent most of her life from the day she was born” page 10, paragraph two.

The story of Tita’s entry into the world marks the first fantastical image of Like Water for Chocolate, initiating the reader into the novel’s magical realism and illustrating the intensity and improbability that characterise the events of the story. The image of Tita flowing into the world in a flood of tears prefigures the sadness and longing that will pervade her life. After Tita’s birth, the flood of tears dries to leave ten pounds of salt to be collected and used for cooking.

The practical attitude with which the characters greet this surreal happening helps to establish the supernatural as an accepted part of the characters’ lives. “Nacha swept aside the residue the tears had left on the red stone floor, There was enough salt to fill a ten-pound-sack- it was used for cooking and lasted a long time” page 10, paragraph two. Outside the kitchen, Tita follows the demanding regime that Mama Elena sets for her daughters. Life is full of cooking, cleaning, sewing, and prayer. This routine is interrupted one day by Tita’s timid announcement that a suitor, Pedro Muzquiz, would like to pay her a visit.

Mama Elena greets this announcement with indignation, invoking the De La Garza family tradition that the youngest daughter is to remain unmarried so that she can care for the matriarch in the matriarch’s old age. Tita is dismayed by this rigid tradition. Outwardly, she submits to Mama Elena’s wishes, but privately she questions the family tradition and maintains her feelings for Pedro. “ you don’t have an opinion Tita and thats all I want to hear about it. For generations, not a single in my family has ever questioned this tradition and no daughter of mine is going to be the one to start” page 15, paragraph 3

This cold hearted appraoch to Titas yearning for marriage is what makes Tita retreat into the safe realm of the ktichen, I think the reason why magic realism was applied to food is because of how universal it is. Whereas music and art only apply to some of us, food is in all of our lives. Since magic realism is all about mixing the magic with what’s real, food is the ideal choice. We’ve all heard of metaphors exaggerating the taste of food, but Laura Esquivel’s descriptions of the effects of food are much more elaborate.

It’s so descriptive that sometimes we doubt our ideals of what’s real by reading the effects of the recipes. By using food as the medium the author was able to smoothly meld together the magical and real aspects of each chapter. Her isolated childhood in the kitchen gives Tita an outlook on life different from that of her sisters, Gertrudis and Rosaura, and she comes to develop different ideals for herself as she matures. As a young woman, Tita rebels against the family tradition that confines her to a life without love.

Her insistent questioning (even though she does not petition Mama Elena directly) of her lot in life can be identified as one of the feminist impulses in the novel. This refusal to accept an assigned and undesirable social role marks the beginning of Tita’s path to self-assertion and freedom. Her love for the kitchen and cooking is a rebelious action against her mother, her realm of the kitchen is the only thing that her mother can not control or do, the kitchen is what keeps her sane from the depressing sitution on the other side of the door. it wasn’t easy for a person whose knowledge of life was based on the kitchen to comprehend the outside world. That world was an endless expanse that began atthe door between the kitchen and the rest of the house, whereas everything on the kitchen side of that door, on through the door leading to the patio and the kitchen and herb gardens was completely hers-it was Tita’s realm. ” This quotes proves my point above, the kitchen door acts as a safe guard to the oppressive realm of her mother’s. In an Elephant vanishes one of the major themes of the story is the idea of things being out of balance.

This theme is introduced when the narrator tells the editor about the importance of unity in kitchen design, as he states, “Even the most beautifully designed item dies if it is out of balance with its surroundings. ” The narrator later emphasizes the importance of balance between a creature and its environment when he talks about witnessing the change in the elephant’s size in relation to the keeper’s size. He states that the balance in size between the two has become more equal, because the elephant has shrunk or the keeper has gotten bigger, or both.

Following the disappearance of the elephant and the keeper, the narrator again expresses the idea that “things around me have lost their proper balance. ” He is no longer able to take action on his own behalf, as he is haunted by this sense that the urban world is out of balance, and he feels that a kind of natural balance has broken down inside him. The imbalance between Tita’s kitchen and outside the kitchen can relate to the elephant vanishes. Tita fells safe in the kitchen and at peace with the “old” kitchen keeps her in balance.

Related to the theme of imbalance is the difference between appearances and reality. The narrator points out that the article covering the story of the elephant’s disappearance is strange, because the reporter tries so hard to maintain that the elephant escaped, when the facts indicate that the elephant had to have almost magically vanished. The characters in the story try to maintain an appearance of normality in the face of an event that defies logic, leading to pointless acts that do not address the nature of the situation.

The discrepancy between reality and appearances also arises in the narrator’s job as he basically just goes through the motions, trying to maintain a professional, pragmatic approach although he does not personally believe that a kitchen has to have unity or any of the other maxims his company invokes to sell its products. The narrator finds that he cannot reconcile the differences between appearances and reality, and as he questions his own perceptions, he experiences a sense of disorientation and confusion.

Throughout the story, Murakami subtly reveals how the vanishing of the old ways leaves people feeling disoriented and how the new ways of being create a sense of disconnection and unease. This can be said about Mama in “ Like water for chocolate” as she is does not like the idea of Tita marrying . She is scared of modern society perhaps, and is insecure about her future. Mamas death The narrator, for example, performs his job as a public relations executive successfully by espousing the commercial viewpoint that “things you can’t sell don’t count for much. Because in truth he does not necessarily believe this statement, saying it and operating from this pragmatic mode seem to confound the narrator, confusing him about his purpose in life. Like other Murakami characters, he is also a loner, a single person, living alone with no apparent ties to family or friends also this can be said to Mama Elena, she has distanced herself from her loved ones through the death of her grand child and of the cruelty committed to Tita .

The narrator watches the elephant and the keeper and marvels at their closeness, their special bond. In the wake of the elephant’s disappearance, the narrator feels despondent, more isolated and alone than ever. As is Tita at the end of the novel after Pedro dies. “ Now it would never again be possible to see that light, because she could no longer feel anything. She would but wander through the shadows for eternity, alone, all alone. ” 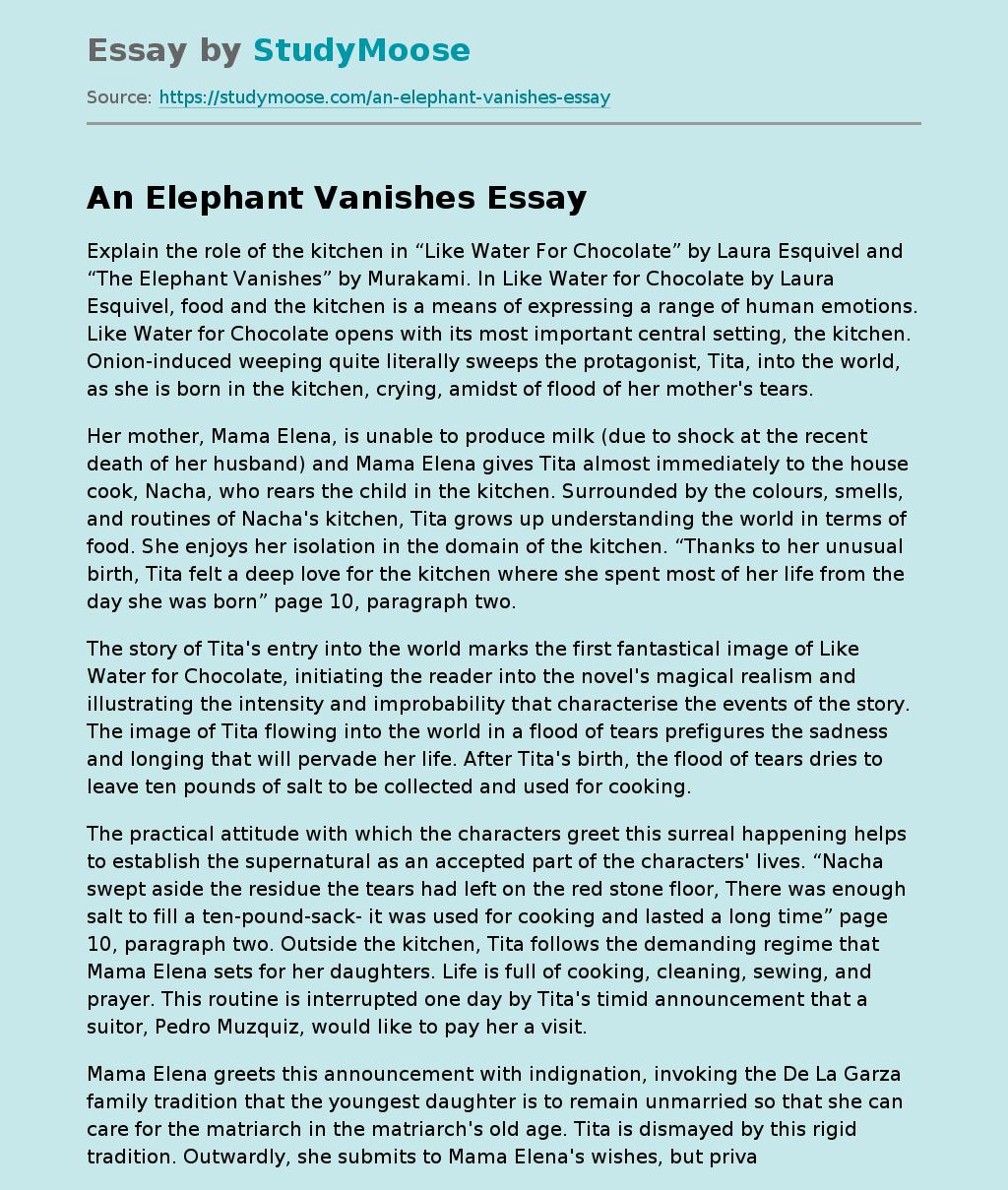