The New England and the Chesapeake Regions Dbq

Throughout the 17th century, the newly settled colonies in North America continued to identify themselves as Europeans. But as colonial expansion progressed they assumed different identities. By the 1700’s, the typical religious spirit and family oriented lifestyle in New England set itself apart from the Chesapeake region, whose fertile land and extended growing season attracted a distinct group of diverse settlers who had different political ideas about government. These unique societies had different reasons for coming to the new world as well.

Don't use plagiarized sources. Get your custom essay on
“ The New England and the Chesapeake Regions Dbq ”
Get custom paper
NEW! smart matching with writer

The New England and the Chesapeake regions differ in social, economic, and geographical aspects.

The Individuals who settled the Chesapeake region were prompted by the rumors of gold and quick wealth, whereas the New England puritans fled the “The Protestant reform” in order to achieve religious freedom (Bailey, Kennedy, and Cohen 42-43). The Joint Stock Company landed in Virginia in search of gold in order to match the riches of the Spanish Empire (Document F). Even though no gold was discovered, the development of Tobacco by John Rolfe as a cash crop in 1612 would ensure that wealthy profiteers would continue to settle the Chesapeake and mold it into a mercantilist society (Bailey, Kennedy, and Cohen), while the New England society was representing a flawless society of families and religion, “a city upon a hill” (Document A).

Although the Puritans grew out of the English society, they sought solitude from their mother country and they were less concerned with their ties to England as the settlers of the Chesapeake were.

Firstly, the New England Puritans fleeing from England to avoid religious convictions held close ties to their faith. In their society, they believed that they were obligated to do god’s will and create morally right, Christian communities who led strict lives devoted to god. John Winthrop expresses these responsibilities when he states, “We must uphold a familiar commerce together in all meekness, gentleness, patience, and liberality” (Document A). However, the Chesapeake settlers set out different goals that fueled the structure of their economic society. Citizens in this region had no religious aspirations, but rather motives to, “dig gold, wash gold, refine gold, load gold,” (Document F).

This mentality leads to settlements based on competition and greed which prevented unification of the Chesapeake society. The New England colonies were composed of families, and this occurred because the religious aspect of society was more appealing to families who wished to live in a unified community based on god (Document B). Meanwhile, the Chesapeake region was colonized by mostly single men based on the fact that the economics and profitability of this society were not conducive to a unified family life (Document C).

Secondly, the climate of the Chesapeake was ideal for large landholders. Farming was a profitable industry in this region, especially near rivers where mass production of cash crops such as tobacco or rice was possible. On the Contrary, the climate in New England was less favorable to the mass production of staple products; however their diversified industry included small farms, cod fishing, and the production of nutmeg. The continental climate in New England made the spread of diseases difficult which in turn increased the life expectancy of citizens in this region, especially in men. In contrast, diseases were more commonly spread based on the climate of the Chesapeake.

As a result, fewer families were able to grow and the lower life expectancy rate lead to more women’s property rights because of an increase in widows. These women’s property rights were not present in the north where families were present. Due to the abundance of large plantations and demand for cash crops, it became necessary to use indentured servants and slaves to profit and introduce mass production. Slaves and indentured servants were not necessary in the New England.

Thirdly, the Gap of Rich to poor was much larger in the Chesapeake region based on the use of indentured servants and slaves then in the New England region who had a more balanced population (Bailey, Kennedy, and Cohen 72). The Articles of Agreement stated the goals of the New England region, “Everyone is quality and estate,” (Document D). Based on the tight bond in the New England community, they felt it important for the entire community to be prosperous and successful, unlike like the Chesapeake region. There was also a sense of faith and service to god as a result of their work to keep their settlement rich in money, religion, and unity. This work ethic through god was demonstrated through the laborers, “consider the religious end of their callings,” (Document E).

The principle of not impoverishing their neighbors was another way in which they could accomplish being “city upon a hill”. Unlike the north, the Chesapeake region used an aristocratic approach to dividing land which in turn left land only to the rich few. Religious ambition was not present in the south and therefore they did not feel inclined to help their neighbors as this they did in New England. Bacon’s Rebellion is a prime example of disjunction in the Chesapeake society because it demonstrated how poor farmers saw large landholders, “juggling parasites whose tottering fortunes have been repaired and supported at the public charge,” (Document H). The imbalance of people and wealth in the south only increased as the slave trade business began to advance and grow (Bailey, Kennedy, and Cohen 66-67) .

Although these societies contrast they do exhibit similarities. Firstly, they both fled Europe in order to achieve a better life whether it is through the discovery of gold or finding religious freedom. Secondly, even though each society flourishes in different forms of industry each society places needed importance on farming and the product of crops in order to sustain settlements. Thirdly, based on immigration lists of European settlers New England and the Chesapeake regions can both be considered male-run societies in which men dominate the population (Documents 3, 4). Lastly, the inhabitants of early settlements in New England and the Chesapeake were primarily of English origin.

Why did this difference in development occur? This occurred because they don’t share religious beliefs, economic balances, climate/growing seasons, industry, or slave trade. For these reasons, both societies developed a unique style of how to live.

The New England and the Chesapeake Regions Dbq. (2016, Oct 11). Retrieved from http://studymoose.com/the-new-england-and-the-chesapeake-regions-dbq-essay 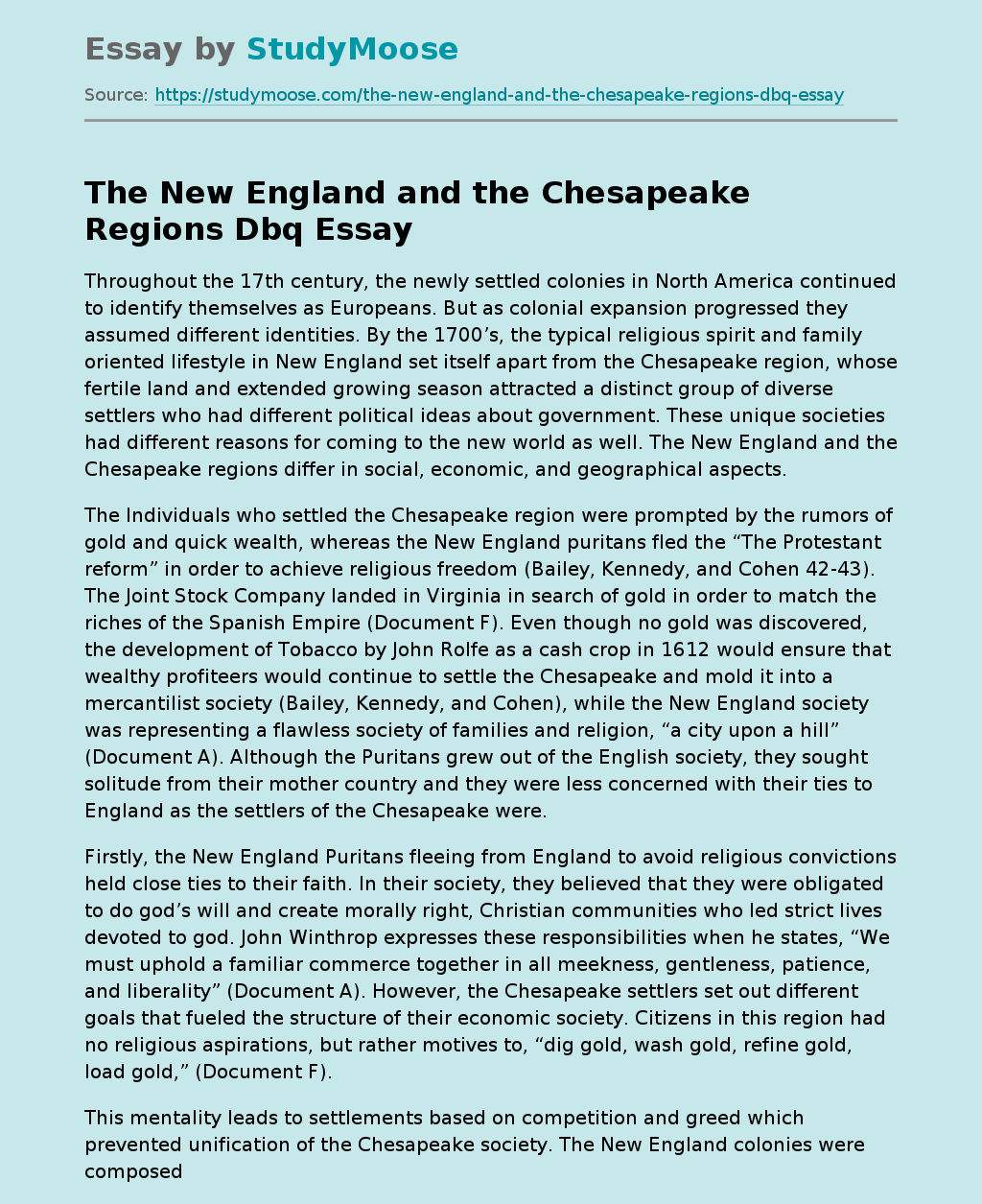