During the late 16th century and into the 17th century, two colonies emerged from England in the New World.

Don't use plagiarized sources. Get your custom essay on
“ Chesapeake Colonies vs. New England Colonies ”
Get custom paper
NEW! smart matching with writer

The two colonies were called the Chesapeake and New England colonies. Even though the two areas were formed and governed by the English, the colonies had similarities as well as differences. Differences in geography, religion, politics, economic, and nationalities, were responsible for molding the colonies. These differences came from one major factor: the very reason the English settlers came to the New World. The Chesapeake colonies were primarily created by ompanies interested in profiting from the natural resources of the New World such as gold or silver to bring back to England. The New England colonies were primarily created to escaped religious persecution and set up a haven for people of their faith. The inhabitants of the New England area were far healthier. Their clean water supply was a sharp contrast to the contaminated waters of Chesapeake Bay. The cool climate had a good impact on colonists because it prevented the spread of life-threatening diseases.

Many farmers moved farther and farther out of the colony for more land. This way they could produce ore products The geography in the New England colonies was a lot different. Because of poor, rocky soil and the short growing season, the land was not very good for farming, but there were a lot of forests and natural ports. These features made that area ideal for shipbuilding and fishing. So the northern colonies became a big shipbuilding industry. Both colonies shared the similarity in suffering from diseases because of their climate. The religion of the two areas differed greatly as well.

The New Englanders were very religious-based, and claimed that they were far more odly than all other colonists. Religion was family-based and with extreme faithfulness. In the Chesapeake, religion was much less severe. The established church was the Church of England, but only became so after 1692. The religious tone was low, and many people did not participate in the church. 0Both colonies practiced religion at their own pace and based it upon their society at their own rate. The New England colonies had developed into a religion and family based society comprised of mostly middle class families.

The economy was based on fishing, shipbuilding, and arming. The farming in New England was done on a much smaller scale. Because the society was so family-orientated, they grew much of their own food and the farms were normally self-sufficient. It was nowhere near the size of the vast plantations in the Chesapeake. This was simply because New England’s focus was not on economic gain. The Chesapeake region developed into a land of plantations and money-driven the population. The economy revolved around the tobacco industry.

Slave trade relied fully on the tobacco plantation owners as a market to sell the slaves to. In addition, the tobacco raised enough to finance the importation of indentured servants, who would then go to work the tobacco, increasing the production further. Both colonies were an experiment as a “new society’ for colonization. In New England, the population was almost entirely English and white. Religious families, including Puritans, Quakers, and Catholics made up a large percentage of the population due to the reputation the New England colonies had as a place of religious freedom.

In the Chesapeake colonies, the population was a majority white ndentured servants and later had more black-slaves. With the boom in the tobacco industry, plantation owners relied on the cheap labor slaves or indentured servants provided. Both colonies take lead in driving off the natives and seizing their own land. Most of the population in both colonies were English/White. The political difference between the New England and Chesapeake region was that New England government associate more with religious matter than the Chesapeake government. The type of government was a theocratic environment.

Each town, which was filled ith educated people, had a local authority and held monthly town meetings in the meeting hall. The Chesapeake Colonies was a legislative owned by aristocrats. The county governments were more spread out; therefore the backcountry farmers were underrepresented. Both colonies had their set way of organizing their government. The New England and the Chesapeake colonies differed in numerous ways. These differences included geography, religion, economics, nationalities, and politics, which created the contrasting societies.

The differences involved almost every aspect of the ocieties from which they all originated from one initial difference between the two: the very reason the colonists came. Therefore, it cannot be denied as a significant cause of the contrast. The fortune-seeking colonists in the Chesapeake created a society based around economic growth, which affected their entire community. The New Englanders, looking for religious freedom, wanted to create a very different society that was centered around religion, not economic gain. It is because of these motives that the Chesapeake and the New England regions of the New World became so different by 1700. 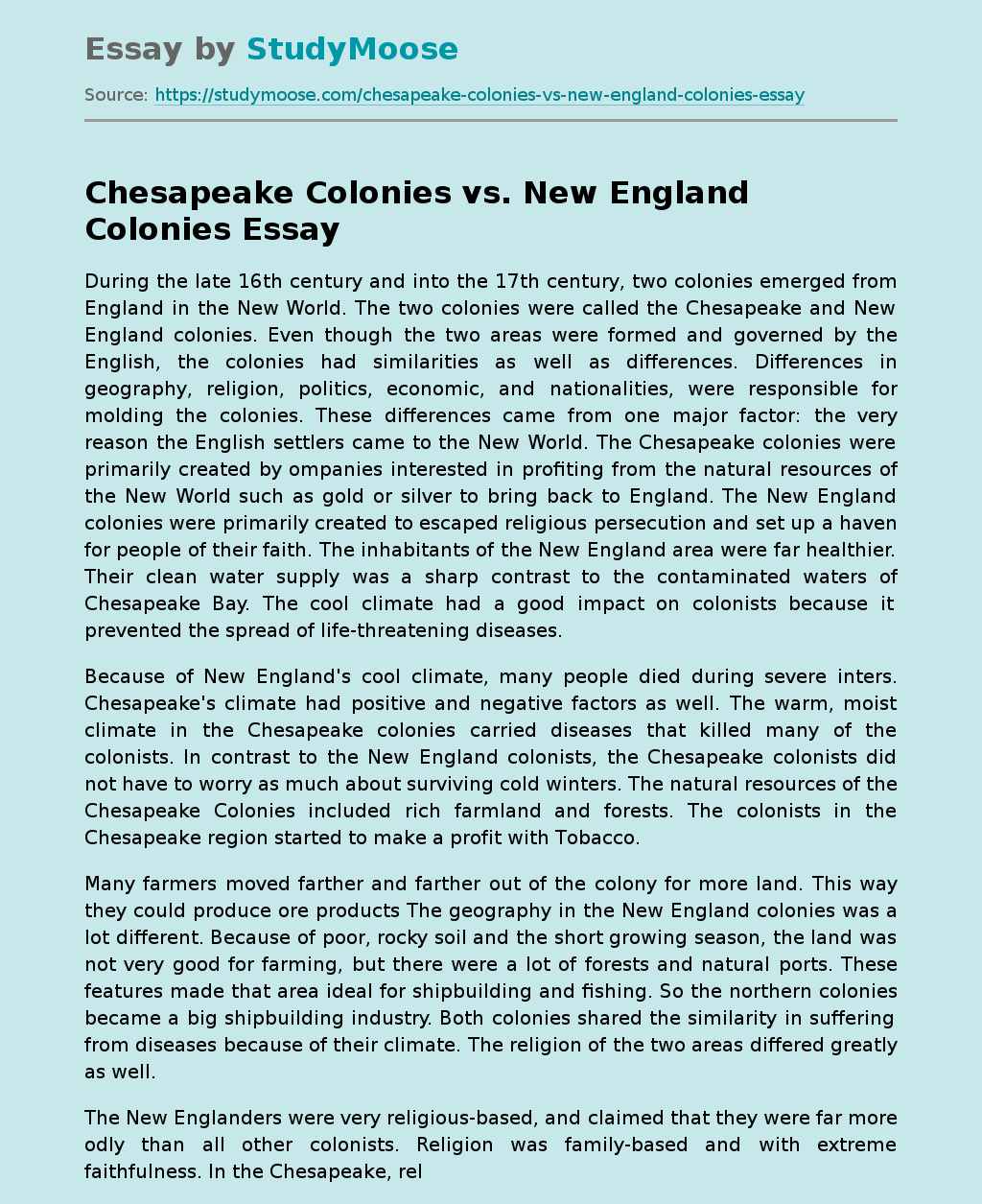