At the start of the 17th century King James 1 became king and he began to look toward the new world as a place were England could make a profitable settlement , as New Spain was for the Spaniards. This was the start of colonization in the new world for England. Following this, many colonies began to develop, and of these colonies, Massachusetts and Virginia were the most well-known. The early settlements of the Massachusetts and Virginia were both established by similar groups of people at the same time; however, their contrasting beginnings as a colony, views on religion, and means of economic stability created two different politics and economic systems.

Turn in your highest-quality paper
Get a qualified writer to help you with
“ Comparing Massachusetts bay and Virginia colonies ”
Get high-quality paper
NEW! AI matching with writer

The settlements of Virginia and Massachusetts were colonies established fairly close together, but the paths taken by the two leading up to their independence greatly differed. In the beginning Virginia had difficulty establishing a strong and permanent settlement; this lasted for nearly two decades. Massachusetts, in comparison, was extremely successful because of their lack of certain obstacles and their religious motivation.

Freedom from religious persecution motivated the Pilgrims to leave England; Puritan merchants obtained a charter for the Massachusetts Bay Company. In addition a unique provision allowed for the company to be located outside of England.

This gave puritans the opportunity to leave a status of a harassed minority and create their own self government in Massachusetts. In addition, the settlers made better decisions as a whole and in representation of their beliefs that shaped the development of their new settlement. Whereas Virginia was initially established to compete with Spain’s settlement of New Spain.

The London investors of the Virginia wanted to expand English trade and obtain a wider market for English manufactured goods. They naturally hoped for financial profit from their investment in shares of company stock.

Both Virginia and Massachusetts settlers came in contact with natives upon arriving to the new world. But Virginias encounter with the Indians were much more trying and difficult than that of the puritans settlement in Massachusetts. When Englishmen arrived at the mouth of Chesapeake bay they were quickly attacked that night by what one of them later said was a band of Indians “creeping upon all foure, from the Hills like Beares, with their Bowes in their mouthes”(American Promise p.56). This was the first of many attacks and disagreements between the native Algonquian Indians and the English settlers.

The settles and the warriors of Algonquian Indian chief Powhatan engaged in irregular or unpremeditated fighting repeatedly for weeks at a time. It wasn’t until the disease and starvation began to plague the settlers that their fights with the Indians started to decrease. By September of 1606, only 5 months upon arriving, many colonists had died, most from mere famine. Powhatan and his people came and helped the weakened Englishmen by offering them corn that they soon accepted as a form of food. Unlike the early settlers of Virginia (Chesapeake Bay) the first Massachusetts Bay colonist encountered very few Indians because of a plagued that had wiped out their population probably caused by contact with Europeans more than a decade earlier(American Promise p.87). Many Indian survivors befriended and assisted the colonists.

Even though the settlers of Massachusetts Bay didn’t have the same problems with natives as those settlers in Virginia, they did both fell victim to deadly ailments that killed a large group of their people. More than two hundred settlers died during the first year, this was small in comparison to the amount of men lost in the first year of the establishment of the Virginia (about 400 men)but still was too great of a number. The death of men was a reoccurring problem for the Virginia settlers, whether from famine or disease. Hundreds of men traveled overseas to this new land in hope of finding the paradise promise by their Virginia Company only to be sent to early graves. 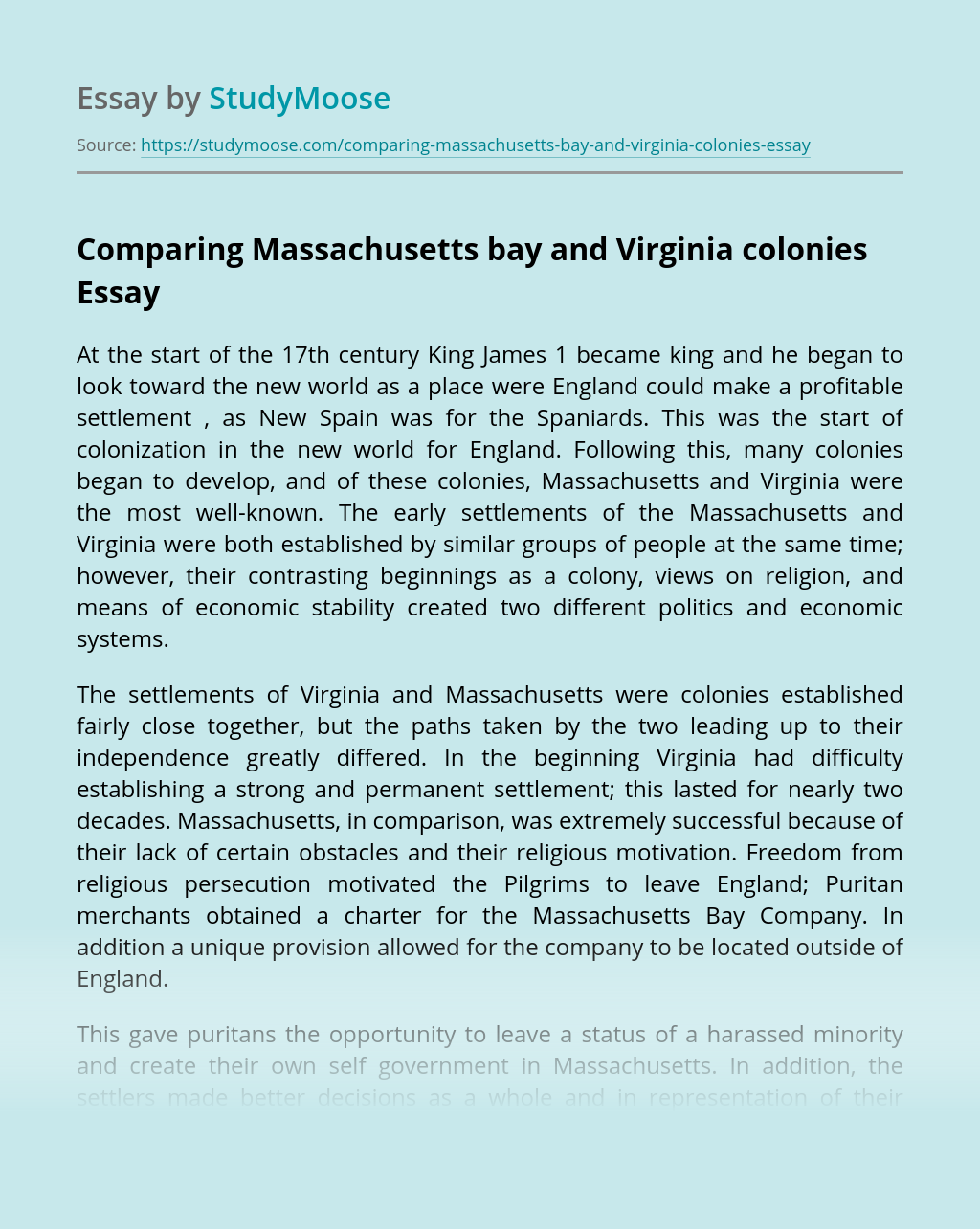 Turn in your highest-quality paper
Get a qualified writer to help you with
“ Comparing Massachusetts bay and Virginia colonies ”
Get high-quality paper
Helping students since 2015
Stay Safe, Stay Original