Constitutionalism in England in the 17th Century

Don’t waste time
Get a verified expert to help you with Constitutionalism in England in the 17th Century
Hire verified expert
$35.80 for a 2-page paper

After the death of Elizabeth I, the last of the Tudor dynasty, in 1603, James VI of Scotland rose to power as James I of England. James I was not used to having to rule with Parliament, therefore he did not get along with them. Since James I was also King of Scotland, he went to great lengths to make an attempt at bringing Scotland and England as close to union as he could.

His anger towards Parliament’s refusal of associating with Scotland financially was only the beginning of his problems with English Parliament. In 1618, the Thirty Years War broke out.

When King James I passed away, Charles I was the successor as King of England. Charles I married Henrietta Maria, the Catholic sister of King Louis XIII, this aroused suspicion of his religious preferences. Moreover, the efforts of Charles and the archbishop, William Laud, to impose the Anglican Book of Common Prayer upon England and Scotland triggered anger of the Puritans and rebellions by the Scots. Parliament signed a Petition of Right in 1628, which declared that thing king could not impose taxes without Parliament’s consent, the quartering of soldiers in private houses, arbitrary imprisonment, and the declaration of martial law in peacetime.

Charles I originally accepted this petition but eventually failed to carry out this agreement because it limited his power. Charles soon decided that since he could not work with Parliament he would not call them to meet. Charles practiced personal rule for eleven years, which forced him to find ways to collect taxes without the support and approval of Parliament. An example of these taxes is ship money, a tax on seacoast towns to pay for the defense of the coast. Charles I also raised funds with the Act of Revocation in 1625, which revoked all land gifted to nobility from the church or royal family since 1540. Continued ownership was subject to an annual rent. Eventually, Charles I could not rule any longer without the help of Parliament, hence the beginning of Long Parliament in 1640. During Long Parliament, Parliament passed the Triennial Act, forcing Charles I to call them to session at least once every three years. Also, in 1641, Parliament presents The Grand Remonstrance, which was a demand for political and church reform. The Grand Remonstrance ordered Charles to stop the ship money tax inland, abolish and demolish the Star Chamber, and requesting that English Common Law have power over the king. This irritates Charles to the point that he declares some members of Parliament “outlaws”, one of them being Oliver Cromwell. The accused members flee Parliament and begin to plot against Charles I, hence the beginning of the English Civil War.

The success of Parliament during the first phase of the English Civil War can be attributed to Oliver Cromwell’s New Model Army. This army consisted of radical Puritans and Independents, who believed they were fighting for God. Cromwell was one of the Independents. The first phase of the war was ended with capture of Charles I. Blinded by his belief in divine right, Charles took advantage Parliament’s troubles and decided to flee to the Scots for protection. The Rump Parliament now accused the king of treason saying that he had acted as a tyrant, traitor, murder, and a public enemy to the good people of the nation. Charles was beheaded for his actions in 1649 and his attempt at absolutism was put an end. This was a great achievement in the rise of absolutism, as Parliament continued to gain more power in England with every passing monarchy. After the death of Charles I, his son Charles II rose to power (during the civil war). The Roundheads, supporters of Parliament, were victorious by the end of the English Civil War. Oliver Cromwell became Lord Protector of England and held all executive power; legislative power was given to Parliament. Cromwell came to find that it was difficult to work with Parliament, even more so when members debated his authority. Six years after the death of Charles I, who Cromwell fought so hard to eliminate, Cromwell himself had done the exact same thing as Charles; demolish Parliament.

After the death of Cromwell in 1658, England was damaged by all the change and turmoil that had occurred. This left Europe wanting to go back to tradition. Parliament kept the power that it had gained back and it played a big role in the government by not allowing taxes without its consent. Since Cromwell did not leave an heir to the throne, Parliament allowed Charles II to return from exile and take power. This is the beginning of a period known as “The Restoration”. The moral lesson that was taken from the English Civil War was, “Parliament could no more exist without the Crown than the Crown without Parliament.” Shortly into Charles II’s reign, the “Cavalier” Parliament was called to session. It was filled with Royalists, supporters of Charles I & II during the English Civil War. During this session, Parliament disbanded the Puritan army, while pardoning most of the Puritan rebels. They also restored the authority of the Anglican Church by enforcing the Clarendon Code. The Clarendon Code contained the Act of Uniformity, which stated that all clergy and church officials had to conform to the Anglican Book of Common Prayer. It also forbade ‘non-conformists’ from worshipping publically, teaching their faith, or attending English universities. Even though he permitted the Clarendon Code, Charles II favored religious tolerance. In 1672, he declared the Act of Indulgence, which suspended all laws against Catholics. Parliament, not able to get the king to recant the Act of Indulgence, passed the Test Act, which only allowed members of the Anglican Church to hold military or civil offices. Charles later dismissed Parliament and relied on the French to finance his rule.

When Charles II died, the threat of Catholicism grew larger for Parliament when Charles’s brother, James II, a strong catholic, took the throne. The ascension of James II to throne essentially meant a new constitutional crisis was at hand for England. James II’s attempt to make Catholicism the primary religion in England once again created conflict between the monarch and Parliament over religion. James issued another Declaration of Indulgence allowing Catholics the right to hold offices, contrary to the Test Act. When James’ second wife, a strong Catholic, became pregnant, Parliament’s outrage could no longer be calmed. A group of members from Parliament invited William of Orange, husband of James’s protestant daughter Mary, to invade England and take to throne. While William and Mary raised an army to invade England, James, his wife, and infant son fled to France, living the rest of their lives under the protection of James’s cousin, Louis XIV. The Glorious Revolution had occurred in England not over what form of government it would have, but rather who the monarchy would be. In 1689, Parliament offered the throne to William and Mary, who accepted with the Bill of Rights.

The Bill of Rights eliminated absolutism in England forever, making it impossible for the king to oppose Parliament or do without Parliament’s approval. In the Bill of Rights, the people were given rights to petition, to bear arms, and the right to trial by a jury. The Bill of Rights established a government based on the rule of law, where no one was above the law including the king. This laid the foundations of a solid constitutional monarchy. The theory of divine right was now rejected in England, and the power to rule came from Parliament and the people, not God. The rise of constitutionalism can be greatly contributed to the foolishness of the monarchies that believed in absolutism and divine right of kings. These absolutist monarchs virtually destroyed themselves by ruling greedily and were more power-hungry than they could handle. The acts and counter-acts that were exchanged between the monarchs and Parliament set the stage for civil war. The victory of the Parliament after the English Civil War generated the superiority of constitutionalism in 17th century England.

Constitutionalism in England in the 17th Century. (2016, Mar 01). Retrieved from http://studymoose.com/constitutionalism-in-england-in-the-17th-century-essay 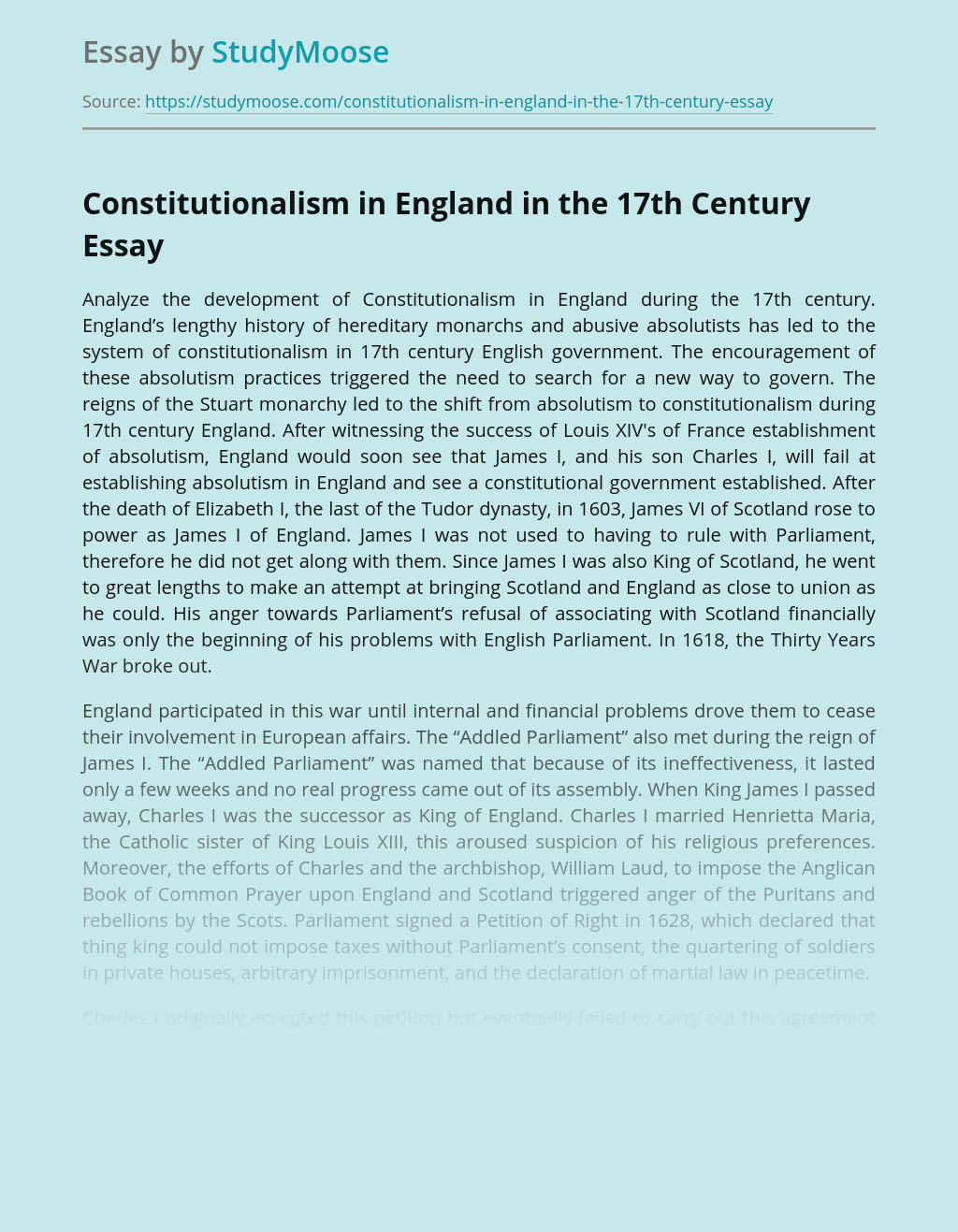 Don’t waste time
Get a verified expert to help you with Constitutionalism in England in the 17th Century
Hire verified expert
$35.80 for a 2-page paper
Stay Safe, Stay Original