The metaphysical poets is a term coined by the poet and critic John Dryden to describe a loose group of British lyric poets of the 17th century, whose work was characterized by the inventive use of conceits, and by speculation about topics such as love or religion. These poets were not formally affiliated; most of them did not even know or read each other.

Their style was characterized by wit and metaphysical conceits—far-fetched or unusual similes or metaphors, such as in Andrew Marvell’s comparison of the soul with a drop of dew; in an expanded epigram format, with the use of simple verse forms, octosyllabic couplets, quatrains or stanzas in which length of line and rhyme scheme enforce the sense.

Don't use plagiarized sources. Get your custom essay on
“ British lyric poets of the 17th century ”
Get custom paper
NEW! smart matching with writer

The specific definition of wit which Johnson applied to the school was: “… a kind of discordia concors; a combination of dissimilar images, or discovery of occult resemblances in things apparently unlike.

” Their poetry diverged from the style of their times, containing neither images of nature nor allusions to classical mythology, as were common.

One of the primary Platonic concepts found in metaphysical poetry is the idea that the perfection of beauty in the beloved acted as a remembrance of perfect beauty in the eternal realm. Though secular topics such as scientific or geographical discoveries interested them, there was also a religious or casuistic element to some of their work, by which they attempted to define their relationship with God.

John Donne (between 24 January and 19 June 1572 – 31 March 1631) was an English poet, satirist, lawyer and a cleric in the Church of England. He is considered the pre-eminent representative of the metaphysical poets. His works are noted for their strong, sensual style and include sonnets, love poetry, religious poems, Latin translations, epigrams, elegies, songs, satires and sermons. His poetry is noted for its vibrancy of language and inventiveness of metaphor, especially compared to that of his contemporaries. Donne’s style is characterised by abrupt openings and various paradoxes, ironies and dislocations.

These features, along with his frequent dramatic or everyday speech rhythms, his tense syntax and his tough eloquence, were both a reaction against the smoothness of conventional Elizabethan poetry and an adaptation into English of European baroque and mannerist techniques. His early career was marked by poetry that bore immense knowledge of British society and he met that knowledge with sharp criticism. Another important theme in Donne’s poetry is the idea of true religion, something that he spent much time considering and theorising about. 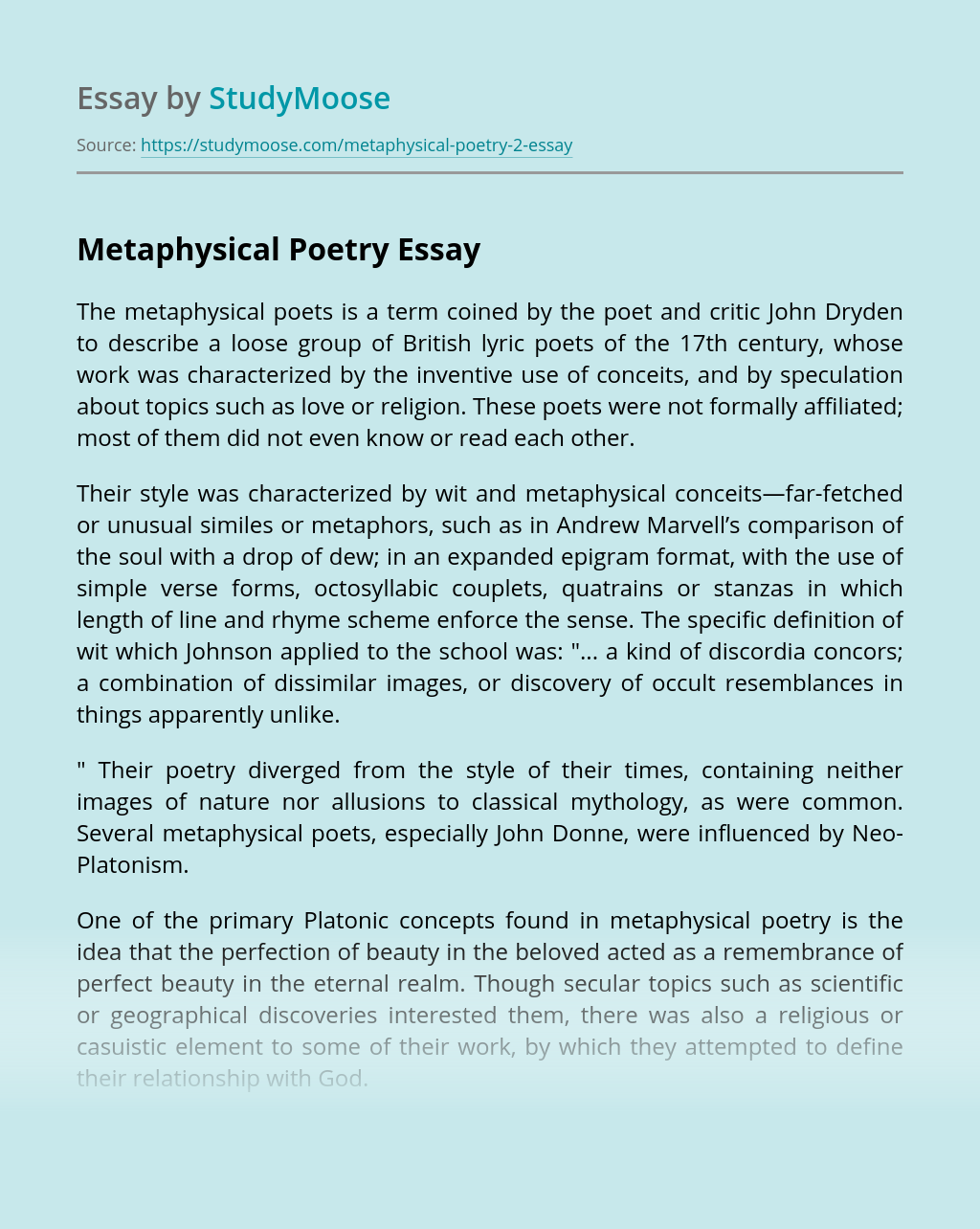