Keating believed in educating the boys to be “free thinkers”.

Throughout the duration of the film, Dead Poets Society directed by Peter Weir, a number of film techniques are expressed to reflect the positive but also the negative impacts of Mr John Keating’s unorthodox and bizarre teaching methods towards his students.

The film is set at the conservative and traditional Welton Academy in Vermont, United States in 1959 as it follows the story of the newly appointed English teacher, Mr John Keating. He is conveyed as an inspirational and influential mentor to his students about independent views and living life to its fullest through his teaching of poetry. Weir uses film techniques to show these positive impacts of Keating’s teaching philosophy to be “free thinkers” on Neil Perry, a student who deals with much pressure from his father to pursue his dream of acting, and Todd Anderson, who is portrayed as a very humble, self conscious and shy character.

Keating’s style of teaching; however, led to the negative impact of Charlie Dalton, who is a popular but also a rebellious character in the film. Due to Mr Keating’s philosophy in teaching, Neil’s engagement in acting and poetry expanded significantly eventually leading to his death. Weir has used Neil Perry as the protagonist to convey a numerous amount of film techniques to display Keating’s belief in educating the boys to be “free thinkers”. Near the beginning of the film, Neil is shown to have a great amount of pressure applied on him by his father’s high standards so that he graduates from Welton to become a doctor. “We expect big things from you this year.”

“Don’t worry, he won’t disappoint.”
This is said by Mr Nolan, the school headmaster, followed by Neil’s father, Mr Perry, and demonstrates the compression put upon Neil to succeed. This scene shows a number of close up angles and high angles of Neil to show his apprehension and sense of vulnerability to the audience. From Keating’s first few lessons about poetry and its importance in life, Neil and the other students are inspired to create the “Dead Poets Society.” This group is created from the motivation of Keating’s beliefs about poetry and expressing your feelings in a positive perspective. Long shots and eerie music are used when the boys are running through the woods to their first meeting in a small and concluded cave.

This is to create a rebellious atmosphere, as it is a key theme in the film from Keating’s motives. When the students arrive at the cave, Neil is portrayed as the leader of the group, which shows his confident and friendly characteristics where he reads most of the poetry. This is demonstrated by the use of close up angles and low angles looking up at Neil to emphasise what he is saying and his power over the other students. Soon after the student’s first meeting, Keating shows the boys to look at life in a different perspective by standing on his desk. This helps Neil understand to have his own decisions in life and be a “free thinker.” “Look at it another way”.

Keating says this in order for the students to have independent views in life. Low angles looking up at the students when they are on the desk are used to show the power and potential they have. Due to Mr Perry’s harsh rules and ideas on him, it caused Neil’s death because of his love for poetry and acting became too great for him where he was allowed to partake in them. This ultimately suggests that Keating’s teaching methods had a negative influence on him. Essentially, these film techniques are shown to indicate Keating’s views about poetry and expressing ones thoughts in a positive outlook, and influencing Neil even though it did lead to his death.

Throughout the film, Todd Anderson’s personality and character changes significantly as a result of Keating’s ways in teaching poetry and expressing ones feelings through Weir’s film techniques. Much like Neil, Todd is immediately put under pressure from Mr Nolan when arriving at his new school on welcome day when the headmaster states, “You have big shoes to fill, Mr Anderson.” A close up angle is shown directly at Todd in order to show his lack of confidence after his brother’s success at Welton. This underlies the traits developed by Todd during the majority of film to show his characterisation as a very self-conscious and uncertain person. This uncertainty as a person is evident when he states, “If I say something, people won’t listen.” Moreover, this quote outlines the personal difficulty and feelings Todd is experiencing because of the pressure from his new friends and school.

Todd’s character changes however, where Keating’s philosophy in teaching has a very positive outlook on him. A very important turning point in Todd’s character because of this teaching occurs when Keating strongly encourages him to read a made up poem on the spot to the class about a given picture. A 360o tracking shot and fast intense music is used by Weir to show confusion to the audience of what is happening. The music and spinning of the camera becomes faster to increase the tension generated by Todd’s newly created poetry encouraged strongly Keating. From this, it is obvious that Todd’s character differs as he realises the concept of expressing ones’ thoughts from Keating about poetry due to the film techniques shown by Weir.

Weir portrays Charlie Dalton as a very rebellious character through film techniques and the negative influence of Keating’s teaching methods on him. This is apparent in Keating’s first lesson of teaching poetry, where he advises the students to “rip out” the introduction to poetry section in their textbooks. As the students are confused and uneasy about this task, Charlie rips the page out immediately, with a close up angle of him to demonstrate his daring character. Keating’s teaching methods however, cause Charlie to get expelled from Welton. “Sucking the marrow out of life doesn’t mean choking on the bone.” Keating says this metaphor in order to show how being “free thinkers” does not mean pulling foolish stunts, which have consequences. Within this scene, Keating states, “There’s a time for daring and a time for caution and a wise man knows which is called for.” He expresses this to outline the importance of knowing when to be unruly and when to remain in the rules. Weir uses dull lighting within the room to show the despondent and depressed. From evidence, Keating’s philosophy in teaching is shown to lead to the negative impacts on Charlie where he is expelled.

The director, Peter Weir, has used many techniques throughout the film to show Keating’s beliefs for his students to have independent views and live life to its fullest by being their sole mentor and inspiration. Keating caused Neil to open up to his identity to discover a love for acting and create the “Dead Poets Society” by being the leader in a way. Todd’s character during the film changed dramatically from self-conscious to confident in his own ability due to Keating’s theories about life where he discovered a talent in poetry. Although, apart from the positives, Charlie’s characteristics cause him get expelled because of his daring and rebellious character. Weir has explored these characters to convey their views from Keating and the film techniques of Weir help demonstrate this. 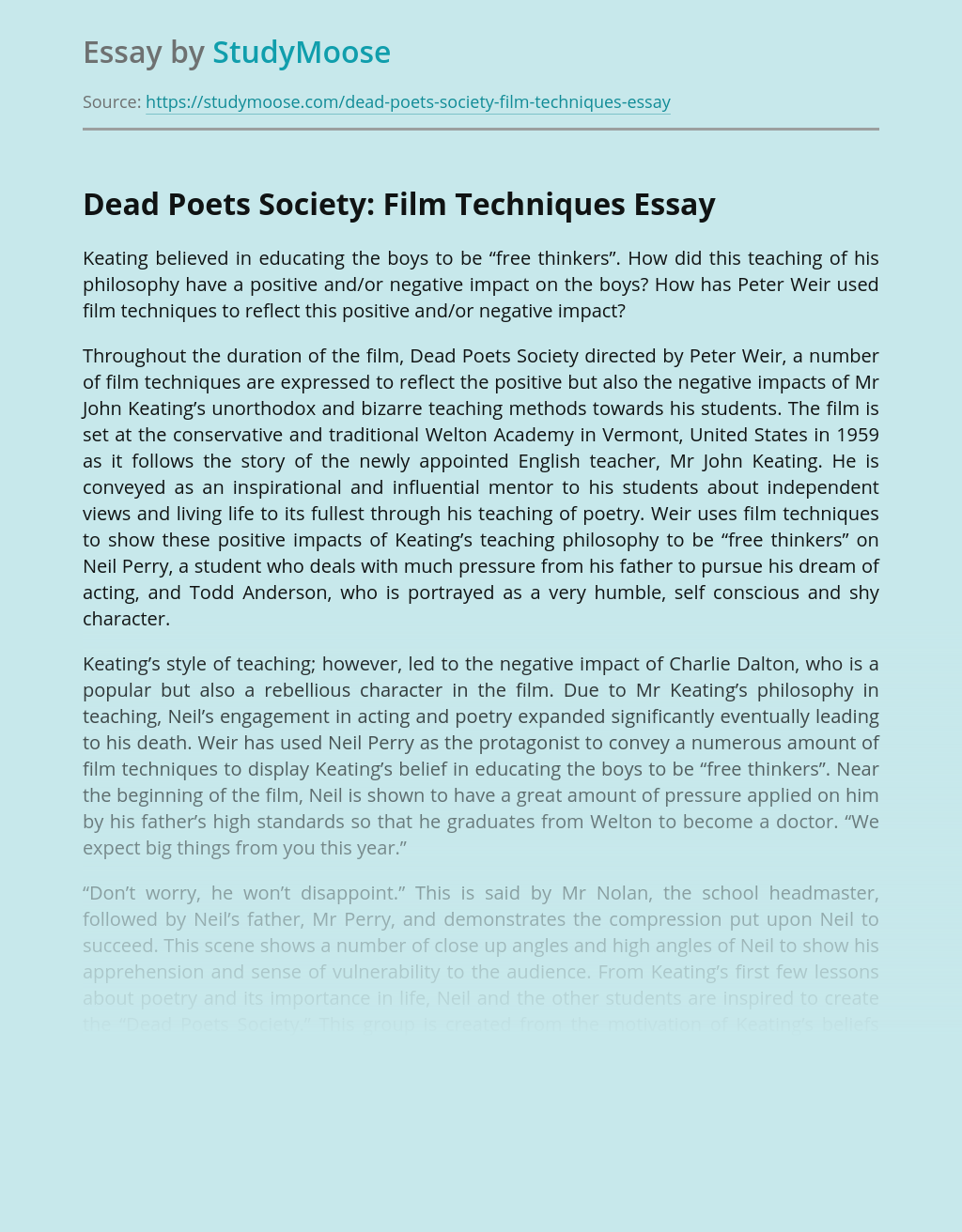