Dead Poet’s Society was filmed through the eyes of transcendentalism using Emerson’s philosophy, as seen in Nature and “Self-Reliance;” and Thoreau’s philosophy, as seen in Walden. The film deals with a group of young men who attend a very strict boarding school and the English teacher who gives them a new perspective on everything. The damaging effects of conformity, beautiful sense of nature, and emphasis of simplicity and individuality are shown in many elements throughout Dead Poet’s Society and are ultimately highlighted by Emerson and Thoreau’s philosophies, making the overall concept of transcendentalism understood.

Turn in your highest-quality paper
Get a qualified writer to help you with
“ Transcendentalism – Dead Poets Society ”
Get high-quality paper
NEW! AI matching with writer

The main character of Dead Poet’s Society is Neil Perry, an over-achieving, good-natured young man who is unwillingly committed to the academic career of a doctor due to his very strict father. All his life Neil had been obedient to his father, until English Professor John Keating instilled some spirit in him and helped Neil pursue acting, an art Neil has always admired.

After auditioning, he got the lead role in the play and proceeded to forge a permission slip to give to the headmaster so he could actually attend rehearsal; this is the first time Neil has done anything against his father’s wishes. Eventually, Mr.

Perry hears about his son’s doing and goes to the school demanding him to quit the play, a command Neil only pretends to obey. On opening night, Mr. Perry shows up and stays to watch the show, although he is not hesitant to discipline Neil afterwards and tell him that he is to be enrolled into military school, where he will become a doctor.

Unable to deal with the situation, Neil gets his father’s gun and ends his own life. Neil’s suicide was more than just that, as Emerson stated, “Standing on the bare ground – my head bathed by the blithe air and uplifted into infinite space – all mean egotism vanishes” (Nature 366).

When Neil ended his own life, he did it to set himself free. Mr. Perry represents conformity and egotism that Emerson was talking about, which vanishes after Neil is dead. Neil was forced into a mold his whole life, one that did not fit him whatsoever, his death represents the mold breaking and how Neil can now be truly free because he has been uplifted. The school that the boys attend is called Welton Academy for boys and it is true to four pillars: tradition, honor, discipline and excellence. The boys have a different idea; they refer the school as “Hellton” and to the four pillars as travesty, horror, decadence, and excrement.

Neil Perry was not the only one to face challenges at “Hellton,” the majority of the boys did. The students of Welton Academy were under immense pressure that was placed upon them by their parents, the staff, and/or both. After attending a few of Mr. Keating’s classes, the boys began to show their true colors. Neil Perry became the leader and enforced all of Mr. Keating’s teachings, Todd Anderson was able to break out of his shell, Knox Overstreet unveiled his hopeless romantic persona, and Charlie Dalton was fearless in exploring poetry.

Emerson once said, “ We but half express ourselves, and are ashamed of that divine idea which each of us represents” (Self – Reliance 369). Here, Emerson is portraying the fear and dawdle the boys showed when asked to dispatch their dutiful ways and do things they actually enjoy. One of the many principles of transcendentalism is the pledge to “make your own way” and the boys eventually grew ill of always knuckling under, so they shed their skin in order for their true selves to emerge.

Although transcendentalism is primarily viewed as straying from tradition, the element of nature and the simplicity that comes along with it are also very salient. Emerson believed that nature resembled many aspects of human life and correspondingly said, “ … the power to produce this delight (man being connected to nature) does not reside in nature, but in man, or in harmony of both” (Nature 366). Neil felt especially bonded with nature at the conclusion of the play, where he was a forest nymph, because nature symbolized freedom.

One of Neil’s primary props for the show was a crown made out of twigs; the branch-like crown is relevant because just before he committed suicide, Neil had placed it on the windowsill of his room; once again showing that the only way to be purely free was to end his own life. Simplicity and nature go hand-in-hand when concerned with transcendentalism because in nature, one needs nothing to have a rich experience. Thoreau, a transcendentalist author who cut himself off from society for some time, stated, “Superfluous wealth can buy superfluities only. Money is not required to buy one necessary of the soul…” (Walden 367).

This quote hits the nail on the head when it comes to the actual Dead Poet’s Society, when the boys would go to a cave nearby and simply read. Not only were they cut off from society within the cave, they had nothing in there except themselves, a couple of books, and a candle to illuminate the pages; nothing else was needed. Each and every one of the members let the words they read or heard sink into their soul and take them to a different world that would be otherwise unheard of. Todd Anderson was new to Welton Academy and also Neil’s roommate. With an older brother who was valedictorian of his class, Todd was constantly under a huge shadow.

At first, he was very timid and would ward off any attempts made to anyone who tried to change him. Mr. Keating, however, actually succeeded in getting through to Todd, by making him go through his thought process aloud after being asked several questions. As with all his students, Mr. Keating was the same. He actively expressed his innermost thoughts and aided the boys to find themselves, nonetheless some students did not understand. Specifically, Thoreau mentioned, “The morning wind forever blows, the poem of creation is uninterrupted; but few are the ears that hear it” (Walden 379).

The “poem of creation” that Thoreau is talking about is very much like what Mr. Keating attempted to relay onto his students, that if you confidently advance to the life you see for yourself, then you will have truly lived and witnessed happiness. Todd was so affected by Mr. Keating that when he returned to the classroom, to pick up his personal belongings after being blamed and fired for Neil’s suicide, Todd was the first to get up on his desk and yell “O captain, my captain” before Keating left.

When Thoreau said “… but few are the ears that her it” he was right; only the boys who understood and took in what Mr. Keating taught stood up on their desks, the rest sat their and obeyed the headmaster, the conformist of the film. The damaging effects of conformity, beautiful sense of nature, and emphasis of simplicity and individuality are shown in many elements throughout Dead Poet’s Society and are ultimately highlighted by Emerson and Thoreau’s philosophies, making the overall concept of transcendentalism understood. Mr. 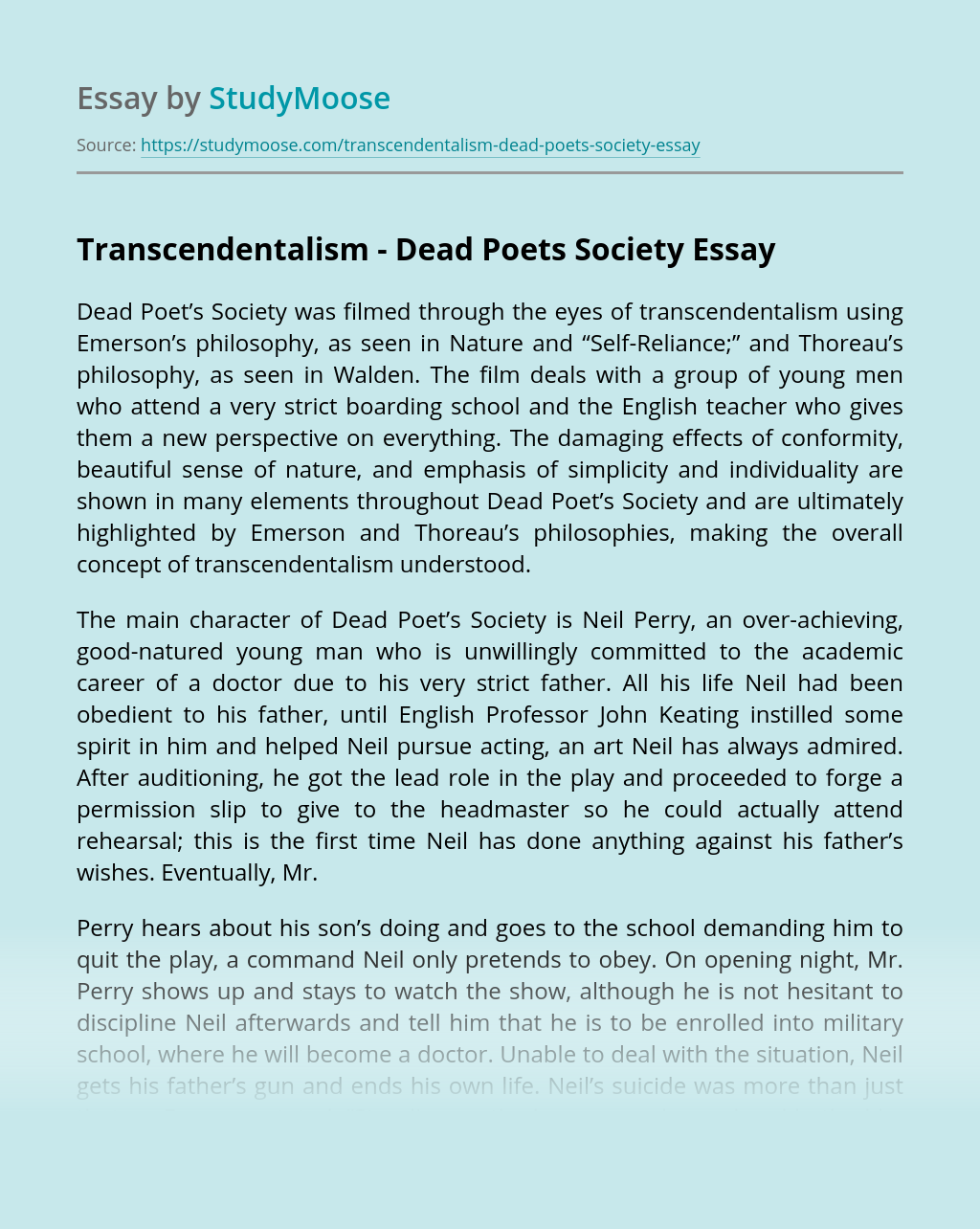 Turn in your highest-quality paper
Get a qualified writer to help you with
“ Transcendentalism – Dead Poets Society ”
Get high-quality paper
Helping students since 2015
Stay Safe, Stay Original