Spain was at its most glorious stately place in the 17th Century, at the time when Miguel de Cervantes wrote his classic novel, “Don Quixote”. The country had established its colonies all over the world, controlling Mexico, Peru, Cuba, the Americas, and even going as far as Asia, in the Philippines. Silver and gold poured in to catapult Spain in economic and political splendor, making it the world’s superpower at that time.

Historians call this period the golden age of Spain.

Don't use plagiarized sources. Get your custom essay on
“ Spain’s Golden Age ”
Get custom paper
NEW! smart matching with writer

However, it was also during this glorious era that Spain had ruthlessly suffered its inevitable defeat, the most popular of which is the destruction of the Spanish armada in 1588, by English forces. Because of this, the country found itself in an atypical, conflicting period, a period wherein a new age was rising to the surface, a period wherein the country was suspended between grandeur and degradation.

While the cause of Spain’s decline is debatable, one thing is historically certain: its kings were having trouble with managing the vast territories, and numerous antagonistic events, like the plague in Castille that claimed many Spanish lives, contributed to the country’s saddening fate.

Catholicism, Spain’s dominant religion was also on the decline, spurring conflicts against other religions like Islam and Protestantism, stemming from the crusades in earlier history. These noteworthy historical occurrences are evident in “Don Quixote”, since the novel illustrates the highly diverse Spanish sociological and political experience at that time.

However, it is Cervantes’ personal experience, sociological and political, that serves as the most potent source of the novel.

It contains elements in parallel with the novelist’s own life; for instance, the Algerian pirates appearing on the Spanish coast, the Moors being exiled, the Spanish prisoners failing to escape are similar events in Cervantes’ own life. Spain: The 17th Century Superpower Page 04 The sociological and political structure of 17th Century Spain had a direct, powerful influence in the writing of Spain’s classic golden novel.

The Romances: Spain’s 17th Century Literary Tradition The dominant literary tradition in this “golden age” was the chivalric romances. Spain’s Arts and Humanities were loaded with popular writings of knights upholding chivalry. The main characters of these stories and verses were knights who set out protecting and saving those who are weak, who go from one place to another to do good deeds. The romances contained melodramatic tones and exaggerated heroic feats that the emotions illustrated seemed to be too sentimental, and the events portrayed seemed to be too heroically impossible.

The main character of the novel “Don Quixote,” was also a knight who set out to save people, but he was portrayed in a humorous light, and his adventures were played out in such a ridiculous way that it was clear the novel is a parody, a mockery of the chivalric romances so popular in Cervantes’ time. The novel, in this context, was a scathing commentary of the literary tradition of the romances. The upholding of chivalric ideals in the novel, however, produced another commentary on Spain’s 17th century literary tradition, this one being quite positive.

Cervantes was careful not to assail the code of chivalry because he himself believed in it. The ideals may be communicated in a humorous manner, and through a humorous character, but the message was quite evident: the belief in chivalric ideals is never wrong. “Don Quixote” was a novel that educated its readers at the time when they most needed such an instruction. The decline of Spain was apparent, and yet its literati favored romantic literature which subscribed to impossible feats and exaggerated Spain’s Golden Age Page 05 characters.

The wide acceptance and phenomenal success of “Don Quixote” only proved that Spain’s literary market truly appreciated the enlightenment provided by Cervantes. Springboard for the Novel, “Don Quixote” The historical context and the literary culture of Spain in the 17th century served as major prompters for the writing of “Don Quixote. ” We can clearly see that Miguel de Cervantes was greatly influenced by the sociological, political and literary conditions in his time that he incorporated and used these real-life elements in his novel.

Cervantes relied on his social and political experience to produce a literary work that reverberates with sociological and political themes, themes which are in perfect consonance with his real-life setting. Spain’s dual condition of grandeur and degradation in his time prompted Cervantes to explore the themes of human identity and morality, providing a commentary on the social mores. More importantly, the novel is rich with historical influences, of events that actually happened in 17th century Spain.

The literary culture of 17th century Spain, on the other hand, played a key role in the writing of “Don Quixote,” for very obvious reasons. The chivalric romances popular at that time made the novel an interesting, radical read because it departs from its formula. The characters, Don Quixote and his loyal squire Sancho Panza, embody the chivalric ideals upheld by the romances, but they also destroy the image of the impossibly heroic knight by being humorous caricatures of chivalry. Moreover, their ridiculous adventures make a mockery of the exaggerated heroic feats portrayed in the romances. 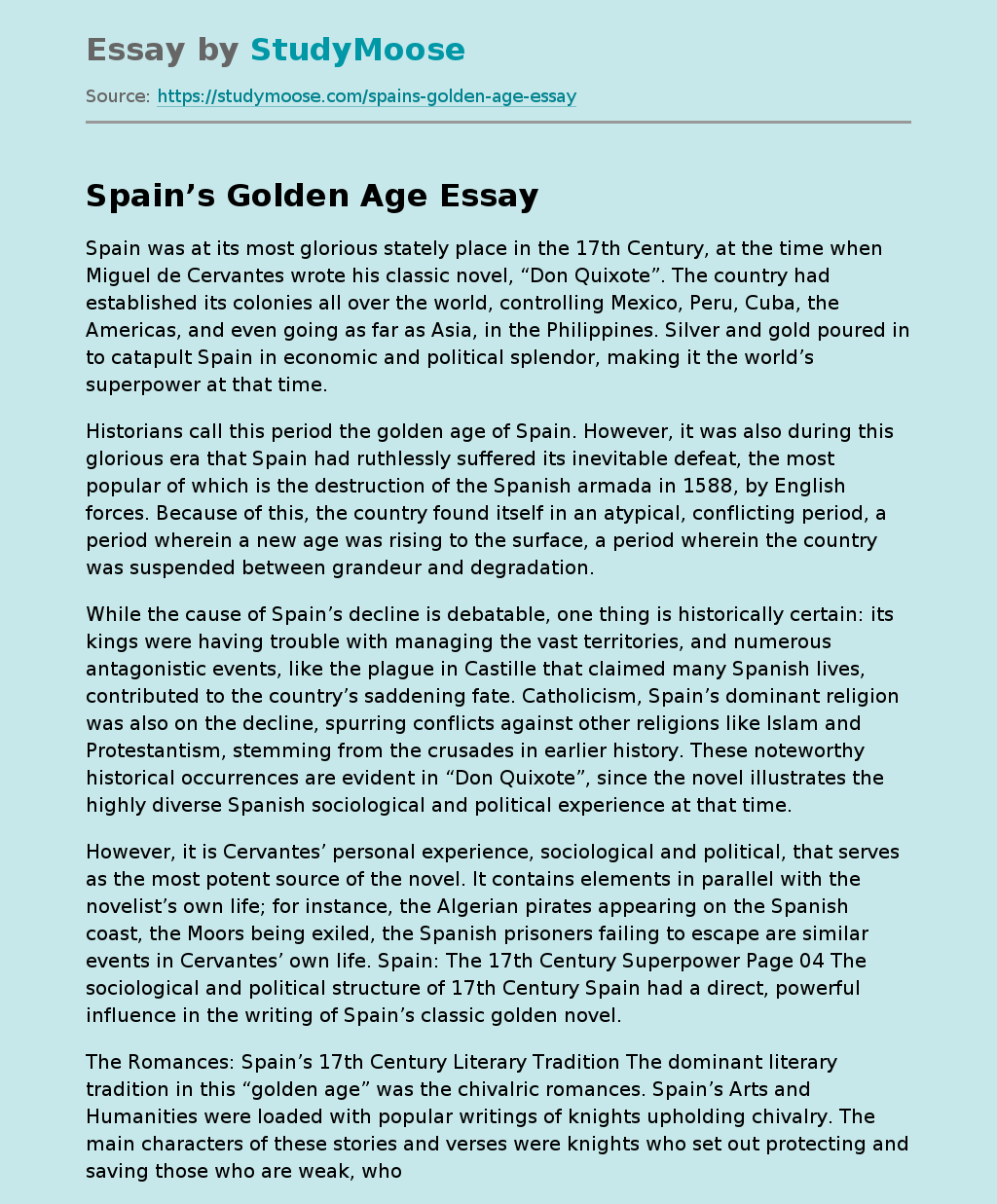