To compare and contrast Don Quixote and Sancho Panza you must read the novel from start to finish to be able to see a clear image of the two companions. In the beginning, Quixote was a simple but a wealthy, intelligent farmer who read too many books about knights and possibly went crazy. He commenced out on his first adventure, only to be informed by the innkeeper he needed a squire, hence, appears his faithful companion Panza. The Adventures of Don Quixote by Miguel Cervantes which takes place sometime in the fifteenth or early sixteenth centuries.

Don't use plagiarized sources. Get your custom essay on
“ Character Traits of Don Quixote and Sancho Panza ”
Get custom paper
NEW! smart matching with writer

Imagine, if you will, medieval times, in which knights, roamed the countryside with their squire, rescuing damsels and vanquishing evil. This may sound absurd to many people in this time, but what if a person read so many books about these so-called knights that he could not determine the real from that which was read. Such is the case in Don Quixote, whom was not really a Don at all.

He convinced a simple peasant named Sancho to become his squire, promising him wealth and a high spot in society. Quixote convinced his squire that the many adventures that the two were going on were actually brave and honorable acts of chivalry, when they were only two fools running around the countryside.

Quixote sees what his mind and imagination create, not that which is actually there. He retreats to a world that holds meaning for him. An example that Quixote has little grasp of reality is the windmill incident Don Quixote sees thirty monsters, as he fights his way inside.

Sancho could not fathom that his master was mad, so he shuts the incident out of his mind, displaying some of the madness of Quixote in our supposedly sane squire. When Quixote does something unreasonable, Sancho despises the fact that his master might be mad and accepts some of the lunacy to make his job easier. There comes a point at which Panza refuses to continue his role as servant. Here he is no longer in character as the faithful sidekick to Quixote but asserts himself as a man and as a person of free will. His threat of harm to Quixote marks a turning point, I believe, in their relationship where Panza asserts himself as a separate person who will not take his lot in life regardless of his station in life. Showing a much stronger man than the squire we had been led to imagine.

The point where Panza fights with Quixote can be seen as a metaphor as to the uprising of the downtrodden. The allure of being governor has been constant for Sancho and is finally fulfilled, when the duke offers him the “island” of Barataria, as a joke. Nevertheless, Sancho does a very good job at it and demonstrates that he is a far better governor than the socially superior duke. When called upon to give judgments on various issues, his solutions are fair, sound, and perceptive. However, Predictably, Sancho’s experience as leaves him profoundly disillusioned and he abandons the “island.” The experience, however, has not been without benefit because Sancho has learnt something about himself: that he “was not born to be a governor”.

One would believe that when Panza leaves his island, he would return home, however, he makes his way back to Quixote. Because he has a deep affection for his master . “I love him as dearly as my heartstrings and can’t conceive of leaving him no matter how much nonsense he does” and later with the duchess (“I have to follow him: we are from the same place, I’ve eaten his bread and I love him dearly … and above all I am loyal.” It is shown throughout the novel that the wealthy intelligent farmer has gone mad living in a fantasy world, perhaps unable to survive on his own any longer. While the poor peasant who has been portrayed as not so intelligent, not only is strong and cunning but more than intelligent enough to take care of himself and his master on their adventures. What starts out as a meaningless business arrangement between the two, ends as a meaningful and heartfelt friendship. 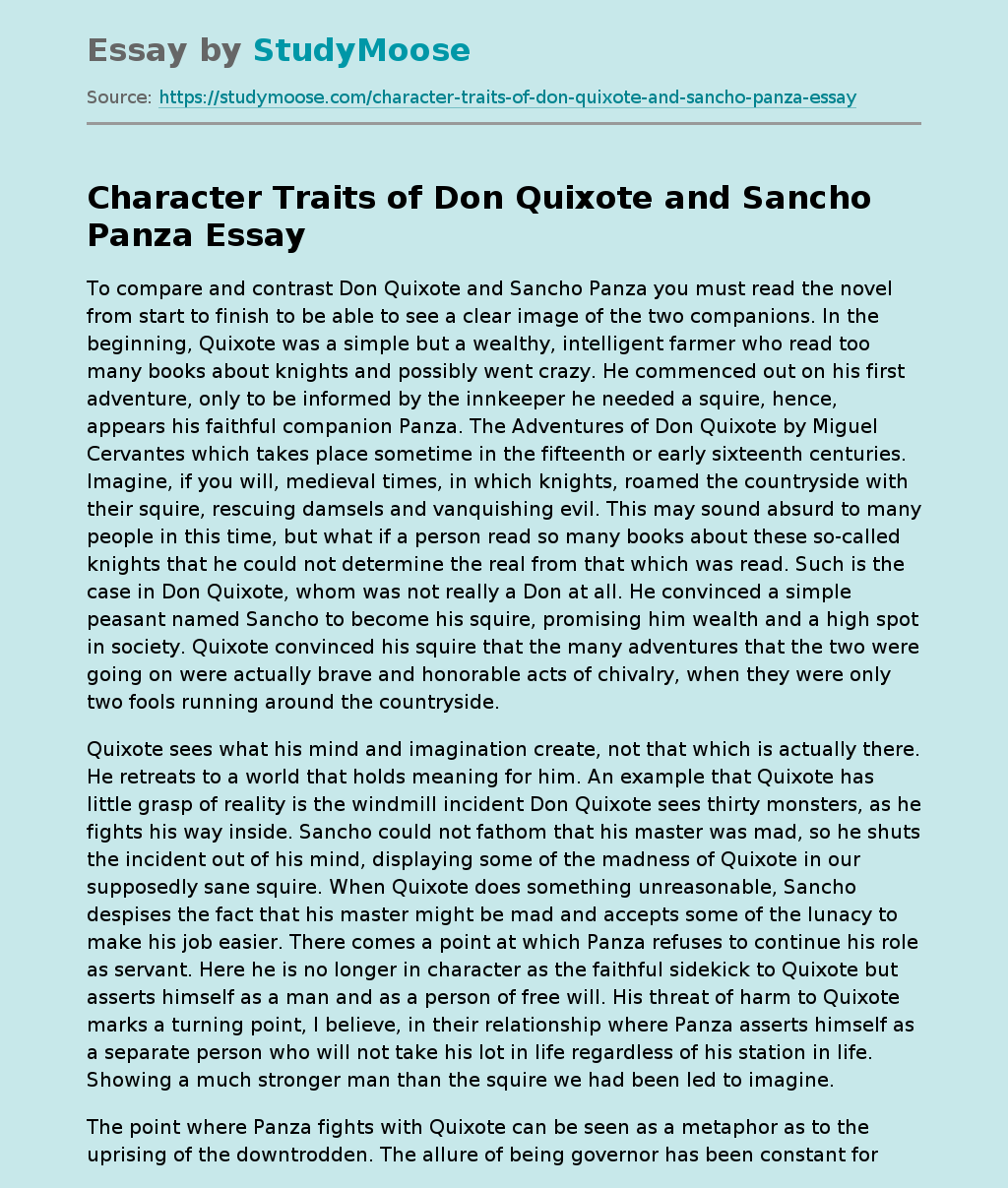