Analysis of the construction of the play

In the play “The Crucible”, all the characters play crucial roles to carry the story forward. In this regard, the characters of Parris, Proctor, Danforth and Abigail form the crucial parts and the perspectives of these characters can be analyzed to understand the real characteristics of them. In this study, the perspectives of John Proctor will be analyzed in the context of the study. Audiences have perceived this character as a negative one in the first instance and a positive one in the latter half.

Motivation of the character

In the play, the character of John Proctor is shown as a strongly built man of middle thirties and he is a farmer by the profession. He has power in the town of Salem and is not led easily by any authority (Miller, 2015). He is mostly firm in his perspectives and decisions. Therefore, many people in the village fear him as well as respect him for his character.

Many also consider him as fraud. The character that has been shown in the play shows him the man who is firm in his decision and forcefully directs others to conduct his tasks. In this regard, none of the people in the town attempts to oppose him. He has known to have a soft corner for Abigail, though he did not express that. According to his perspective, Betty has not been possessed by a witch and also supports Abigail on that. Therefore, he opposed to the perspectives of Parris on the aspect of blaming Abigail on the condition of Betty.

In this regard, John Proctor perceives the conception of witchcraft as irrelevant. However, despite being tough and strong, he also has a soft heart and for which he has shown care of Abigail. The perspectives of Proctor are also based on the opposing of the administrator and giving strict instruction to his maids. He also does not like to hear to any opposition on his decisions and for this, he has been feared and respected in the society. In a statement that he said to Mr. Paris “You cannot command Mr. Parris. We vote by name in this society, not by acreage.” This justifies his firmness and fearless persona. However, Abigail was the one who open opposition to his decisions and acted as a fearless girl who attempted to win the heart of Proctor. The story showed different characteristics of Proctor and the characters have different shades with the changing scenarios in the play. Proctor also had sympathy for Parris and his daughter. In this regard, Proctor came to watch Betty and also supported Parris to get mental support in the aspect of getting her daughter cured. Doesn’t make sense

Exploration of the character

The character of Proctor has been different from that of the other characters that have been shown in the play. He also perceived that the main culprit behind the condition of Betty was Tituba, who was the maid of Parris. He believed that Tituba was responsible for bringing in fear in the mid of Betty (Torkamaneh&Ghaderi, 2018). Therefore, he opposed the claims against Abigail and held Tituba responsible for the act of witchcraft on Betty. Proctor also opposed to the administrating power that the Governor was showing to him in the play. This showed that Proctor is fearless and did not care about the people in authority. He had his own rights and decisions to follow rather than listening to others and following their instructions. In this regard, the character of Proctor can be considered as rude and arrogant compared to other characters in the play. However, he also showed maturity in the terms of discussion with other characters of the play and this shows that although he was in his middle thirties, still he had the power and skill to manage the conversation with others and also showed his willpower. He also got involved in argumentation with many of the characters and therefore, according to his perspective, the words that are spoken by him are correct and apt and words of others are not meaningful or apt for him. The character of Proctor has been powerful and effective in the closure of the play and the author has used this character effectively to make the play, effective one. Many of the characters such as Danforth considered him as Anti-Christ and also opposed his views on the situation of Betty. However, he was not moved by his criticism and shown anger on the words of Danforth. This also proves his arrogance and the positive attitude towards his own decisions.

This play has strongly built the character of Proctor and this character has been considered as one of the strongest and important characters of the overall play. The author had penned down this character with extreme effectiveness and the way the character has shaped up throughout the play seemed extremely interesting and attractive. Modern readers can feel connected with this character because of his strengths and strong personality which can be appreciated by the current generation. The negative side of the character is also attractive for modern plays. 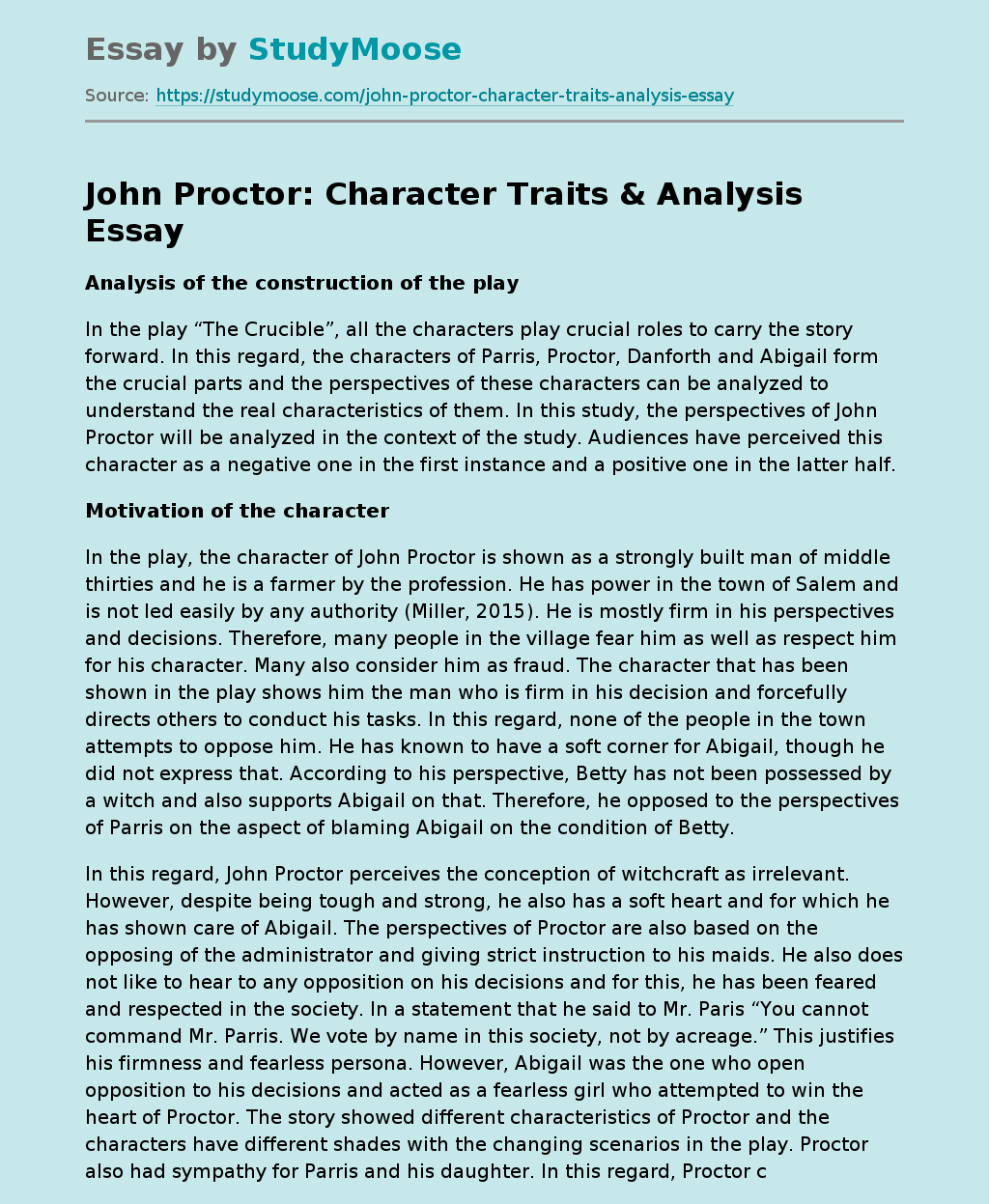