How much is John Proctor responsible for his own death

“The Crucible” is set in 1692, in Salem, Massachusetts. It is written by Arthur Millar in the early 50’s. It follows the lives of a gang of teenage girls, meddling with witchcraft. Stifled by the crushing pity of their elders they end up doing strange things in the woods. The chief of the group of young ladies is a girl called Abigail Williams-her innocence lost in the bed f John Proctor, a married farmer who is the soul of the play. Suddenly the devil is let loose in Salem.

Don’t waste time
Get a verified expert to help you with How much is John Proctor responsible for his own death
Hire verified expert
$35.80 for a 2-page paper

The girls are discovered, spurred on by their terrified accusations and the entire village is consumed by cries of witchcraft.

One by one, the blameless victims of mass hysteria are torn from their homes until, inexorably, Abigail’s vengeance is turned on Proctors wife. A timeless tale of truth on trial, the Crucible relentlessly a suspenseful drama of collective evil and personal conscience. It’s centre is a vastly moving story of guilt, love and redemption.

Proctor is responsible for his own death in many ways, the main reason is infidelity in relation to Abby. The other contributing factors are morality, pride, religion, law and local grievances. This is the first time we see Proctor and Abby interact with each other,

“Since Proctors entrance, Abigail has stood as though on tiptoe, absorbing his presence, wide eyed. He glanced at her then goes to Betty on the bed”(pg 17) We can tell the mood in the room instantly, Abby is stood there staring at him on tiptoes, indicating her need to attract him by making herself taller, as it is believed height is the figure of beauty.

Where as Proctor is quite dismissive, and shows that he doesn’t want to be acknowledged by her by glancing at her and appearing quite cold and clinical. The issue of infidelity plays a major part in the lead up to Proctors death.

As Abby is envious of Elizabeth and is also quite resentfully bitter towards her, regarding how Abby was thrown out of the household because of her entanglement with John. In this quotation Abby is clueing the audience in to her past affair with him, “I look for John Proctor that took me from my sleep and put knowledge in my heart! I never knew what pretence Salem was, I never knew the lying lessons I was taught by all these Christian women and their covenanted men! And now you bid me tear the light out of my eyes? I will not, I cannot! You loved me, John Proctor, and whatever sin it is, you love me yet!

” For Proctor, we quickly realise their relationship belongs to the past-while he may still be attracted to her, he is desperately trying to put the incident behind him. Abby, on the other hand, has no such sense of closure as this quote makes clear. As she begs him to come back to her, her anger over flows, and we see the roots of what becomes her targeted, destructive romp through Salem. We also see in this quotation a fierce loathing of the entire town. “I never knew what pretense Salem was, I never knew the lying lessons….. ” Abigail hates Salem and in the course of “The Crucible”, she makes Salem pay.

The adultery is a matter of morality, whether behaviour like this should be accepted in society or if it thought as on a negative note. Elizabeth finds out about it and time is needed to mend the relationship as the scab hasn’t not yet formed. Abby still has a flame for left for Proctor and is determined to win him over by accusing his wife of witchcraft, but Proctor gets in the middle of the feud and the tables turn and he, himself is accused of being in league with the devil. Another aspect of the build up to Proctors death is his pride.

This is the human defence system coming into action, when we are threatened we feel we must create a certain image to gain respect and most of the time it works, the problem that Proctor faces is if he can sustain his pride. Proctor is a very honest, upright and bluntly spoken person and hates hypocrisy, he is also a good man, but one with a secret, his fatal flaw. In Act four, Proctor utters these lines when he is wrestling with his conscience over whether to confess to witchcraft and thereby save himself . “Because it is my name! Because I cannot have another in my life!

Because I lie and sign myself to lies! Because I am not worth the dust on the feet of them that hang! How may I live without my name? I have given you my soul; leave my name! ” (pg 115) The judges and Hale have almost convinced him to sign his life over to them, but the last stumbling block is his signature on the confession, which he cannot bring himself to give. In a way this unwillingness reflects his desire not to dishonour his fellow prisoners: as he would not be able to live with himself knowing that other innocent people died while he quaked at deaths floor and fled.

More importantly, it illustrates his obsession with his good name as reputation is tremendously important in Salem. Religion is another contributing factor to Proctors death, as Salem is quite sacramentally run . You are judged if you are not a follower of the faith, which today would be frowned at. Pride and religion link together as; if Proctor didn’t have as much self-esteem, would he be civil to the clergy men and have an advantage in the situation? It would be deceitful yet it would help in this predicament, the only person who seemed to be on Proctors side of the court was Reverend John Hale.

He was a stranger to the town and did not know of Proctors resilient character, and so he thought Proctor was in need of help and is on his side. Proctor: “There be no love for Satan in this house, Mister. “(pg 55) Hale: “I pray it, I pray it dearly. (he looks to both of them, an attempt at a smile on his face) Well, then-I’ll bid you good night. ” By saying this it indicates that Hale understands Proctor’s problems, which is the accusation that Proctors household is in league with Satan.

The law plays a big part in the lead up to Proctors death, as they have the authority to choose what the morally correct verdict is on the case. Law is linked in with religion as members of the clergy are judges, which shouldn’t really happen as they are biased on their answers due to religious beliefs. Parris is the main distributor of opinions, and always has a word to say on the matter. He seems to bring his religion up on quite a few occasions, as that is his speciality and strength so he knows he can out smart Proctor by discussing this.

“Such a Christian that will not come to church but once in a month! “(pg 72) he is trying to imply that Proctor is a bad person which is prominently a disadvantage on Proctors name, which is an underserved judgement. Overall, “The Crucible” is quite a deep and meaningful play, even though the play itself has very few examples of symbolism beyond the typical witchcraft symbols (rats, toads, bats etc) the entire play is meant to be symbols with witch trials standing in for the anti-communists “witch hunts” of the 1950’s.

Proctor is the protagonist, one of the chief contenders where as Abby is the antagonist, his opponent. I think the main issue that lead to his death was in the name of Abigail Williams. If Proctor didn’t get involved with Abby, then the finger wouldn’t have been pointed at him and his wife, it would have been directed at someone else perhaps even Parris, her own blood and flesh.

Abigail strikes me as a very misleading character, at the start I got the impression she was just a girl who had made a mistake and was sorry for it, but as the play unfolded her character had a dark, malicious side it to it that was sharp and uneasy. The tone of the play is quite serious and compressed, as the language is almost quite biblical. The way they use “goody” for the name of their women and “mister” for their men is unusual and creates a flavour of period. It gives a sense that church dominates their lives. Proctor decided to die for Salem, in doing so he had finally purged his guilt, his wife said.

How much is John Proctor responsible for his own death. (2017, Nov 04). Retrieved from http://studymoose.com/how-much-is-john-proctor-responsible-for-his-own-death-essay 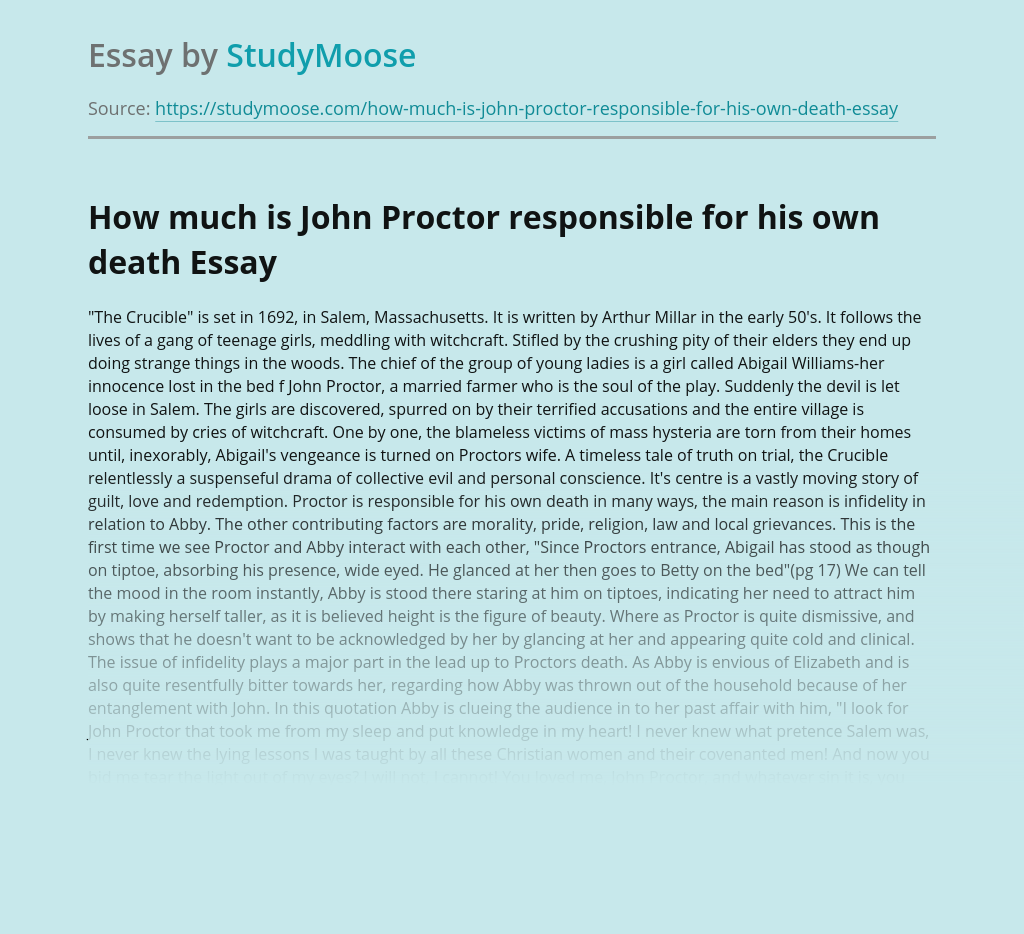 Don’t waste time
Get a verified expert to help you with How much is John Proctor responsible for his own death
Hire verified expert
$35.80 for a 2-page paper
Stay Safe, Stay Original