Arthur Miller’s “The Crucible” illustrates a powerful drama based on the Salem witch trials in 1692. However Miller used his play as an analogy, representing the period of “McCarthyism” that lasted from the end of the Second World War to the late 1950s. Derived by the war against Stalin’s Soviet Union, McCarthyism was a term describing the intense anti-communist suspicion in the United States. Lead by Senator Joseph McCarthy, many Americans who were believed to cast communist influences to American society came under intense scrutiny from the government, private-industry panels, committees and agencies.

Don't use plagiarized sources. Get your custom essay on
“ John Proctor Character in Arthur Miller’s The Crucible ”
Get custom paper
NEW! smart matching with writer

The primary targets of such suspicions were government employees, those in the entertainment industry, educators and union activists. In “The Crucible” a very strict theocracy rules over Salem, a small city in the state of Massachusetts USA, where the Bible is law and anyone who does not agree with the rigorous Puritan laws was suspected of congregating with Lucifer himself. The accusations of witchcraft start when a group of rebellious teenage girls controlled by Abigail Williams are caught dancing in the woods.

They know that dancing is forbidden, so out of fear of being punished or accused of witchcraft the girls decide to tell the public that they had been lured into serving the devil and begin to accuse others of having been seen with the devil. In an attempt to prove that they are lying John Proctor and a group of friends put their lives at risk to save their friend and loved ones. In this essay I will show how Arthur Miller encourages the audience to believe in John Proctor as a tragic hero.

When we are first introduced to John Proctor in the play he is described as a “man powerful of body….and not easily led”. This signifies that he is a strong and capable man who is competent enough to think for himself and knows right from wrong and is a respected man with high social status. However the audience’s high expectations about Proctor come to a sudden halt when it is stated that “Proctor, respected and even feared in Salem, has come to regard himself as a kind of fraud. But no hint of this yet appeared on the surface”.

This reveals that Proctor is a kind of hypocrite. However because it state that he came to regard himself as a fraud this shows that he found the error of his ways and that he perpetrated something that he now regrets. This is also backed up by the quote “he is a sinner, a sinner not only against the moral fashion of the time, but his own vision of decent conduct”. These feelings of guilt prompt the audience to be more forgiving of his sin. When Proctor is introduced In Act One he arrives at reverend Parris’s house too see Parris’s daughter Betty who was also involved with the girls that were dancing in the woods. She is suffering from shock after being caught by her father.

The whole town is now talking about witchcraft being involved. Proctor’s gentleness to Abigail Williams (who is Reverend Parris’s niece) portrays that he as certain affection for her, this is shown in the quote “(his smile widening): ah, you’re wicked yet, aren’t y’!” This elucidates that Proctor still treats her with care and tenderness. However Proctor is firm about not wanting his relationship to continue this is explained in the quote: Abigail-“Give me a word, John, A soft word.

(Her concentrated desire destroys his smile.) Proctor -“No, no, Abby. That’s done with”. In this quote Proctor shows great willingness to do what is right. Furthermore Proctor strongly defends his wife from Abigail’s crude remarks. This is shown in the quote: Abigail-“(with bitter anger): Oh I marvel how such a strong man may let such a sickly wife be-” Proctor- “(angered at himself as well): You’ll speak nothing of Elizabeth!” This quote shows us that Proctor is truly furious about Abigail’s remarks about his wife. It also states that Proctor is angry with himself. This could mean that Proctor blames himself for Abigail’s rudeness and making her the way she is. This is a sign of Proctor being a true hero as he is self conscious and believes he has made mistakes that he is now trying to correct. 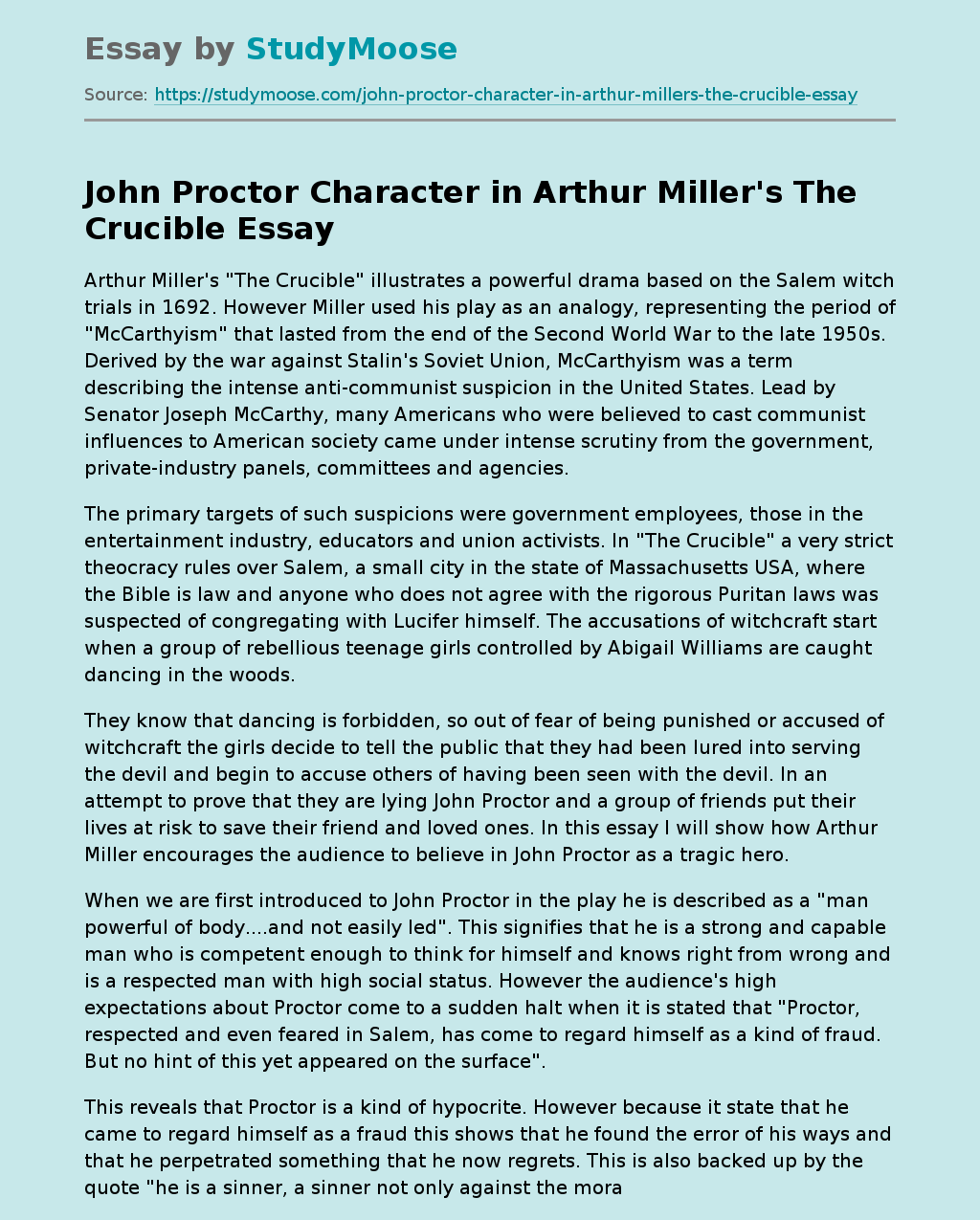