Character of John Proctor in "The Crucible"

The year was 1692 and John Proctor was in his middle thirties in the town of Salem, Massachusetts. Witchcraft was a huge problem around this era, and was punishable by death, even if the accused were innocent. It was a very corrupt system, that people were taking advantage of. Abigail Williams, who was around seventeen, had an affair with Proctor. This caused them to become rivals, and if word got out, it would ruin Proctor’s good name around the town. This can be seen as Proctor’s conflict throughout the entire book.

Don't use plagiarized sources. Get your custom essay on
“ Character of John Proctor in “The Crucible” ”
Get custom paper
NEW! smart matching with writer

In The Crucible, Authur Miller shows John Proctor as a secret sinner, to make his pride vibrant. This flaw comes to play when he is pressured to confess but ends up being an honest man despite his pride.

John Proctor is first seen as a well-known farmer and a very respected man around town. Abigail pulled Proctor aside and told him about how she fantasizes them together. Proctor responds to this by saying, “Abby, I may think of you softly from time to time.

But I will cut off my hand before I’ll ever reach for you again. Wipe it out of mind. We never touched, Abby” (Miller 23). This lets the reader know that an affair occurred between Abigail and Proctor, and Proctor is not proud of it, while Abigail is. It is also known that Elizabeth Proctor, John’s wife, found out about this dalliance, and fired Abigail from the housekeeping position at their home. Proctor says to Elizabeth during this conversation, “No more! I should have roared you down when first you told me your suspicion.

But I wilted, and, like a Christian, I confessed. Confessed! Some dream I had must have mistaken you for God that day. But you’re not, you’re not, and let you remember it! Let you look sometimes for the goodness in me, and judge me not” (Miller 55). Proctor was honest and confessed this affair to Elizabeth, and she forgave him, which shows how strong the relationship was between these two. One night Reverend Hale, the local minister, came to Proctor’s door and said to him, “…In the book of record that Mr. Parris keeps, I note that you are rarely in the church on the Sabbath day” (Miller 64). Proctor has not been showing up to keep the Sabbath holy, which is an important commandment not to break. This is another example of Proctor’s pride that is continually putting pressure on him.

John Proctor is constantly building up the pressure throughout the whole plot. He would rather die than live his life without his perfect name. His secret sin would heavily affect the townspeople’s thinking of him negatively if it got out. Elizabeth Proctor was accused of witchcraft by Abigail because she wanted to get rid of her so she could get with her husband. She did not confess to this and would be hanged because of it, but they gave her another year due to her being pregnant. Elizabeth was given a poppet from Mary Warren but turned out to be an attempt to frame her by one of the girls who had stuck a needle inside of it. Proctor tried to defend her by asking Mary, “You stuck that needle in yourself?” (Miller 74). This made Mary stutter and helped prove Proctor and Elizabeth that they were innocent. Proctor also proceeds to call Hale, “a broken minister” (Miller 77). Proctor said this due to him thinking of Hale as a corrupt coward who supports the idea crooked court. Elizabeth was then taken away by Hale and she left by saying, “Oh, John, bring me soon!” (Miller 77). Elizabeth believes in her husband and that he will figure this out and prove her innocent. When it got to court John Proctor was pressured to confess one of two things. One option would be to confess the affair he had with Abigail so that he could save his wife, but this would end up ruining his good name throughout the town. The other option would be to confess his involvement in witchcraft, but this is not true and would make him a liar. Proctor chooses to confess his affair at the time, but it ultimately did not end up going his way. The court brought Elizabeth in, and without knowing if John confessed it or not, was asked why she fired Abigail from her housekeeping role. Elizabeth, who never has lied before, did prevaricate and ended up making both of them seem even worse. This made Danforth and Giles believe that Elizabeth is 100% guilty.

Things were not looking good for John Proctor. During the court hearing, Mary Warren is scared to death about her being accused of a witch. Proctor convinces her to confess to the judges that the girls have been faking this the whole time because he is only focused on saving his wife. The judges, as all do, want evidence, so they tell Mary to faint as she did before if it is all a hoax. But due to all the pressure and anxiety she is feeling, she can’t, so she continues to tell the truth. Right before she can start talking, Abigail starts screaming and yelling that there is a yellow bird that is possessing them through Mary, and the judges are concerned. Mary is puzzled as could be at this point, so instead of being honest, she turns and says to Proctor, “You’re the Devil’s man!” (Miller 118). This was said in front of everyone, and now everyone is against Proctor. His name is ruined and is now accused of witchcraft. Proctor, a little while later, is now saying his final words to Elizabeth and is thinking he will confess to witchcraft to get out of dying, but this would make him an impure liar. Elizabeth tells John, “I am not you judge, I cannot be. Do as you will! (Miller 138). Proctor is afraid that his very pure wife will judge him for the rest of his life if he is a liar, but she lets him know she will not. Proctor is brought forth to Danforth, and Proctor decides he will confess. Danforth needs proof to everyone that you did, so he wants John to sign his name on a sheet of paper that will be posted on the church. Proctor exclaims, “Because it is my name! Because I cannot have another in my life! Because I lie and sign myself to lies! Because I am not worth the dust on the feet of them that hang! How may I live without my name? I have given you my soul leave me my name!” (Miller 142). Proctor is saying that his confession and the head judge’s word should be enough. Proctor cannot live with his name being soiled, and if his name is posted this will happen. John snaps and tears up the confession, so he doesn’t confess. This ultimately makes him become a victim of hanging. John did the right thing and was hanged an honest man. He died to save his wife, children, and more people who have to suffer due to the corrupt Salem witch trials.

Crucibles are containers meant to melt metals at very high temperatures. A crucible can be personified into the character, John Proctor in this book written by Authur Miller. The reader can see him being put under all of this pressure, and he finally had to let it all out. Doing so saved people, including his wife, but resulted in him dying. He can also be looked at as the tragic hero in this drama. Although he had some troubling sins and hardships, he is still looked at as a good and pure man. In The Crucible, Authur Miller shows John Proctor as a secret sinner, to make his pride vibrant. This flaw comes to play when he is pressured to confess but ends up being an honest man despite his pride.

Character of John Proctor in "The Crucible". (2021, Jan 29). Retrieved from https://studymoose.com/character-of-john-proctor-in-the-crucible-essay 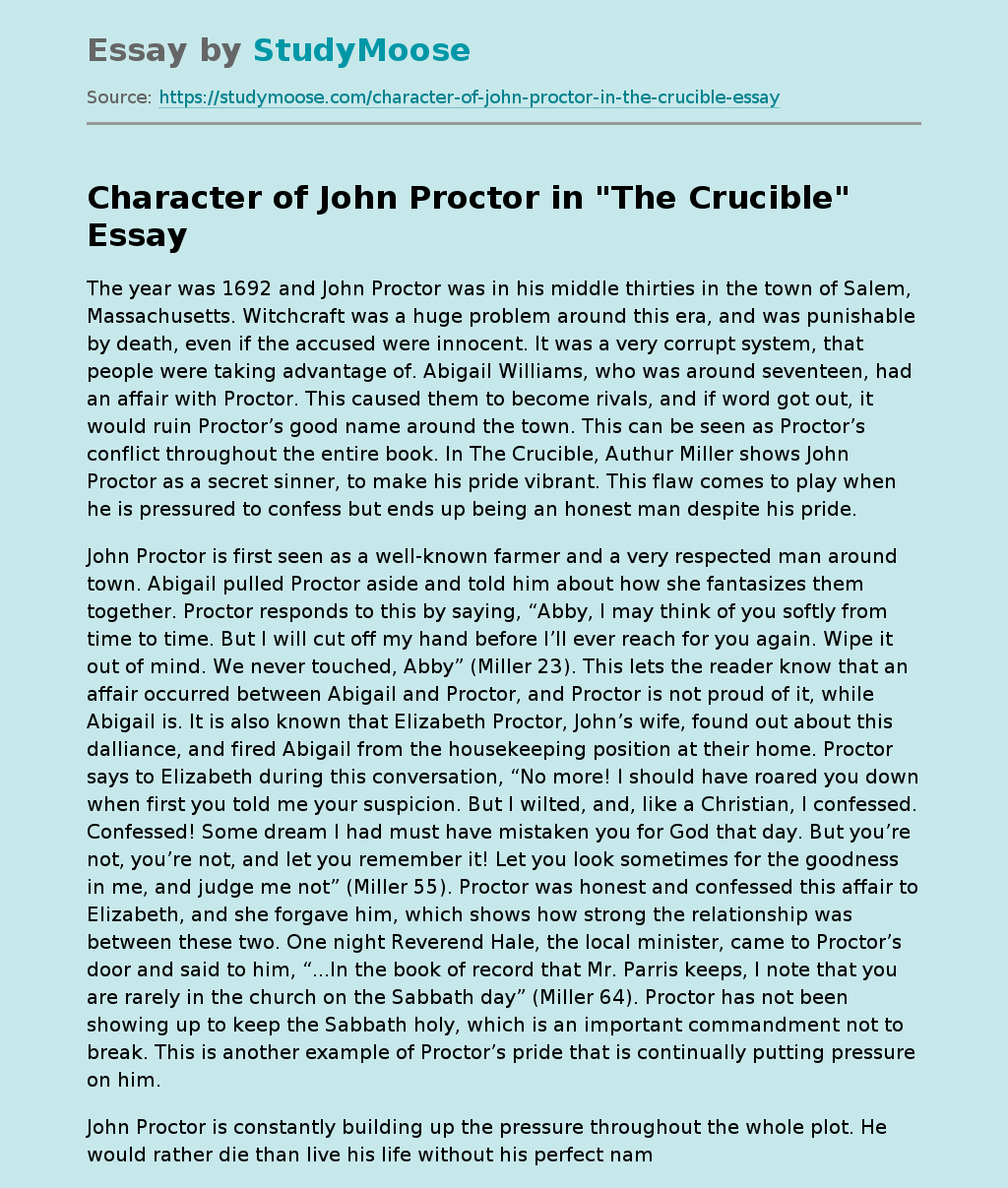