HALE: You most certainly do, and you will free her from it now! ” In this instance Tituba cannot resist because she is merely a slave and Hale is her superior. We, free from the restraints of society as they knew it, can stand back and see the injustice that is so prevalent in Salem. In this sense we share a viewpoint with John Proctor. He, in his isolation from society, can see conservative Salem with all its travesties quite clearly, as can we, the modern audience.

Don't use plagiarized sources. Get your custom essay on
“ ‘The Crucible’ – John Proctor ”
Get custom paper
NEW! smart matching with writer

This isolation derives in part from his constant conflict with other members of Salem society such as Parris and Hale.

In turn, the root of this conflict is in Proctor’s broadly different values, unlike those held by the community as a whole. Proctor for example, refuses to accept the allegations of witchcraft at face value, while everyone else is all too happy to mix rumours and truth. Hence, Proctor acts as the rational staple of Salem, the eyes if you like, through which a modern audience can see and make sense of it all.

Proctor’s centrality to the plot of ‘The Crucible’ is vital as far as Miller’s underlying meaning is concerned. If Proctor does indeed represent Miller, then he must be

centrally involved in the play in order that the audience may see all aspects of it. Indeed, Proctor’s journey through the events of the play is the audience’s own. As the play draws to a close, so too does Proctor’s life.

He is driven away to his death, leaving Elizabeth on stage as the final curtain falls. Thus, Proctor’s battle between truth and life provides the moral to Miller’s tale. As Proctor chooses the path of a truthful and virtuous death – the path we see as morally right – the audience sees Proctor to have triumphed over the hypocrisy all around him, hence proving his

choice to be right and providing a moral for the story. However, in order for Proctor to function properly in his role as the eyes of the audience, it is vital that the audience sympathises with his plight. Were Proctor made out to be a bad character, then whatever path he ultimately chose would similarly be made out to be the wrong such choice. This would completely change the meaning of the play, making it appear to support the concept of the witch trials. Miller had to ensure that Proctor maintained in the eyes of the audience the status of the tragic hero – someone they could empathise with, sympathise with, and respect equally.

There are a number of means by which Miller ensures that the audience comes to like and sympathise with Proctor. For example, in a play which opens with crying and conflict, Proctor is the only character who openly laughs (act one, page 25) making him seem a relaxed and likeable character, and instantly separating him from the anguish and hysteria of the other characters. He refuses to accept others’ truths, preferring to make up his own mind, and hence does not collapse into the panic that others are all too ready to succumb to.

For example in act two, while Mary happily and readily believes the rumours of Goody Osburn’s association with witchcraft, Proctor calls for “the proof, the proof” – he will not accept rumours, but needs evidence. This provides a telling insight into Proctor’s attitude to justice; he will not simply accept allegations, suggesting him to be a very rational man. The audience is naturally drawn to his calm, cheerful and positive attitude. Equally effective is Proctor’s part in the plot of the play.

Because Proctor is the central character in the play, and because the audience sees its events through his eyes, we are required to side with him. We know Proctor to be “powerful of body, even-tempered … respected” and these are characteristics we as an audience look up to, leading us to greatly respect Proctor. This is bound to result in the audience siding with him over other characters. In many cases these characters are portrayed as ‘bad’ from the start. In the case of Parris he is described as having “cut a villainous path” and we are told that “there is very little good to be said for him”.

Proctor on the other hand is clearly portrayed as a character worthy of our admiration. His constant opposition to and disagreement with characters such as Parris throughout the play (their argument in act one, pages 24 and 25, for example) makes proctor out to be the ‘good-guy’ of the piece. However, were it not for the introduction of the image of Proctor as a tragic hero, this respectability may lead him to become rather a cold character, barring the audience from identifying with him. Instead, Proctor’s all-too-common flaw gives him a kind of humanity that the audience may recognise in themselves.

Proctor’s only real ‘failing’ in the eyes of society is his lust for Abigail. While now, in the 21st century, lust may be more or less freely admitted and recognised as part of the human condition, in puritanical Salem it was a most terrible sin. Hence we can understand, to a certain extent, the battle that Proctor is having with himself, and therefore we desire to help him through it with our sympathy. Our recognition of Proctor as an ultimately good man makes our sympathy for him even more acute when taken in context with our concept of Salem as a community.

We, like Proctor, see Salem as a rather extreme puritanical and conservative society and the characters within it such as Hale similarly. We see all too clearly the mad hysteria that develops in Salem, but we are not presented with any evidence to support it, as detailed in the example of Hale’s interrogation of Tituba presented earlier on. We are further encouraged to see Hale as a bad character. In act two he visits Elizabeth and John in their home. We are told that appears “quite suddenly, as though from the air” and that he is “different now – drawn a little, and there is a quality of deference, even of guilt, about his manner now”. 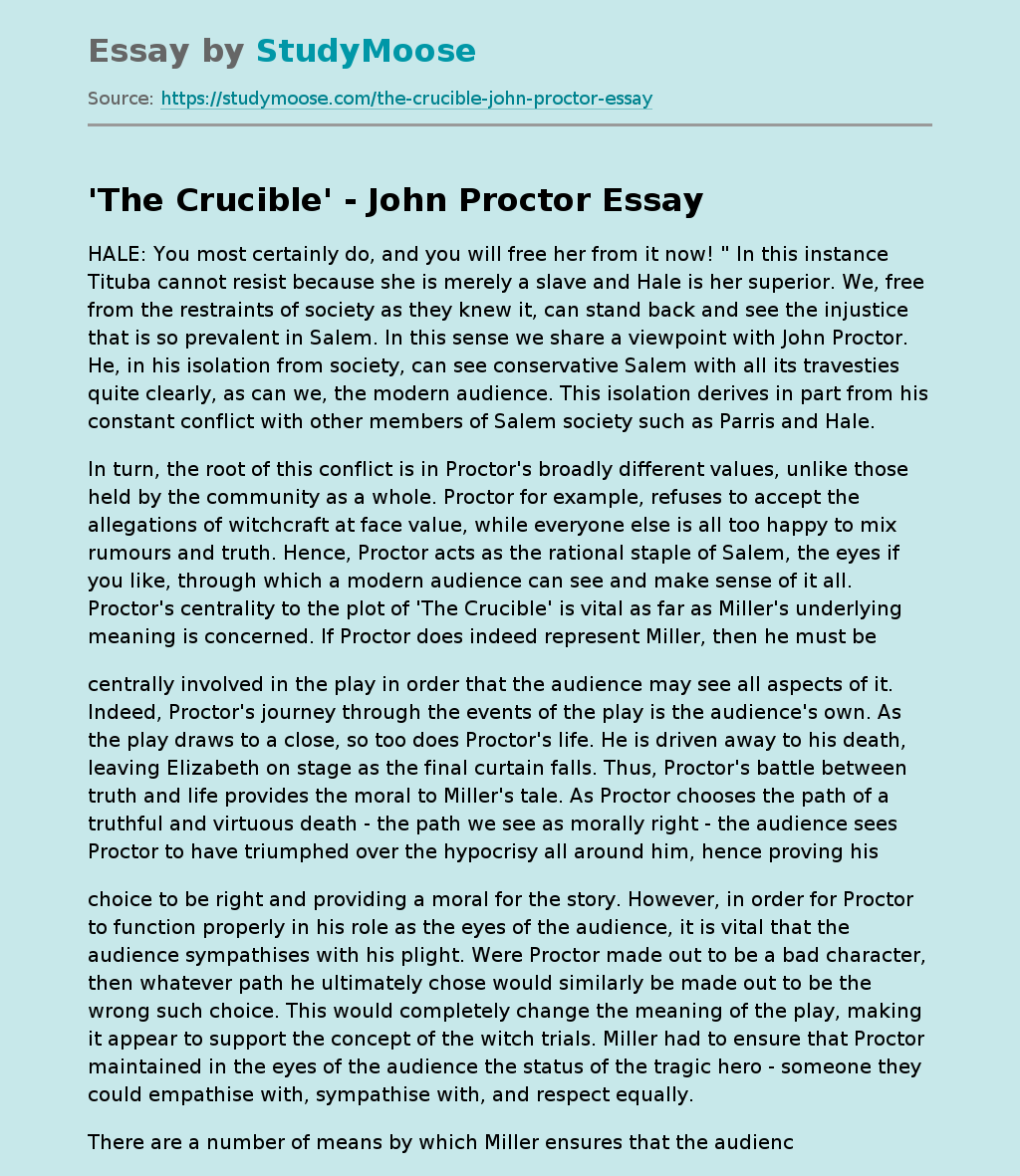