John Proctor from the Crucible

When a man is confronted by evil, fear, and injustice he will show the hero that he really is or run away like a faceless coward. Throughout the story there are many ways to characterize John Proctor. The three biggest are his selfishness; that was discovered in the beginning of the story, his internal conflicts; which lasted through the middle of the story all the way to nearly the end of the story, and his selflessness; which emerged in the end of the story.

Don't use plagiarized sources. Get your custom essay on
“ John Proctor from the Crucible ”
Get custom paper
NEW! smart matching with writer

When one puts his personal desires ahead of his family, he destroys everything he has.

John Proctor once lusted in Abigail, proof of this is throughout the story but is first mentioned in a conversation between Abigail and John Proctor, first Abigail states, “I have a sense for heat, John, and your has drawn me up to your window, and I have seen you looking up burning in your loneliness. Do you tell me you have never looked up at my window? ”(Abigail, Miller, I, 1031) To which John replies, “I may have looked up.

”(Proctor, Miller, I, 1031) This is the first confession of John’s adultery. John Proctor’s selfishness had left him weak, a weakness of fearing being discovered a lecher.

For a long time he knows people are being accused, but he does nothing. He is afraid if he confronts the court with the truth about Abigail, that she might charge him with lechery. John Proctor’s selfishness will leave him conflicted and unknowing about his next decision. John proctor’s internal conflicts drive him to a point of desperation; in which he denounces his own faith. John’s conflicts have left him weaker than that he was before, and that weakness makes him depend on Mary Warren to reveal the truth about the witch trials in his place. Mary Warren would then accuse John Proctor of witchcraft.

John is thrown into a dungeon and he is in a dilemma whether he should hang like a “saint”, or live with the guilt. In a conversation between Elizabeth and John Proctor, his inner struggle is shown, after Elizabeth says that she cannot judge him, “Then who will judge me? God in Heaven, what is John Proctor? I think it is honest, I think so; I am no saint. Let Rebecca go like a saint for me it is fraud! ”(Proctor, Miller, IIII, 1100) Elizabeth then replies that she is not his judge, and to do as he will, to which John states, “Would you give them such a lie? Say it. Would you ever give them this?

You would not if tongs of fire were singeing you you would not! It is evil. Good, then-it is evil, and I do it. ”(Proctor, Miller, IIII, 1100) When John Proctor’s conflicts have been chosen he turns into a selfless hero. John Proctor is an honorable man, but it was not always so. He was selfish and greedy, and then because of that he was later conflicted. At first John Proctor wants his life, so Danforth would then ask him if he had seen anyone with the devil to which John Proctor would cry out, “I speak of my own sins; I cannot judge another. I have no tongue for it. (Proctor, Miller, IIII, 1102) If not for Rebecca Nurse showing up in irons John Proctor would have confessed himself. He also says that if he hangs he blackens his name, his family’s name, his friends’ names, and all others in Salem who looked up to him. He quotes, “Beguile me not! I blacken all of them when this is nailed to the church the very day they hang for silence! ” (Proctor, Miller, IIII, 1102) John Proctor’s selflessness before his death is the last shred of goodness he sees in himself. When one puts his personal needs ahead of this family he destroys everything he has. Read about conflict in Salem the witchcraft trials compromise

John Proctor’s selfishness and greed is what started the great issue that escalates into the witch trials and made him weak and conflicted. His conflicts left him weak and unknowing of what direction to go and made him rely on others to do what was rightfully his duty to do. When he sees Rebecca Nurse his selfishness and conflicts go away; therefore, he knows what he must do; he must give his life for himself, his family, and his friends. John Proctor was not always an honorable man, but when John decided to give his life for others well-being as well as his good name he himself says he sees the last shred of goodness in himself.

John Proctor from the Crucible. (2020, Jun 02). Retrieved from https://studymoose.com/john-proctor-crucible-new-essay 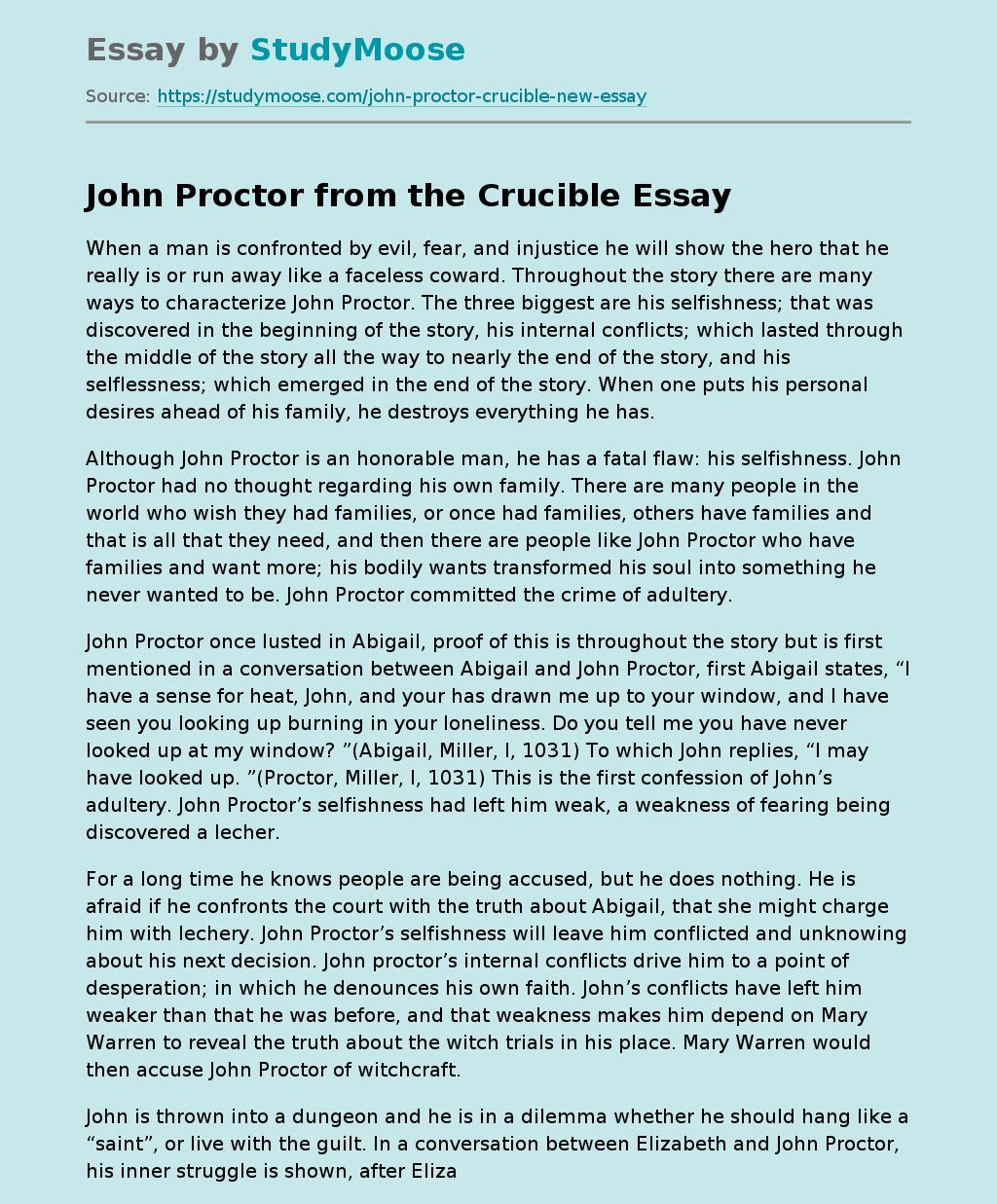